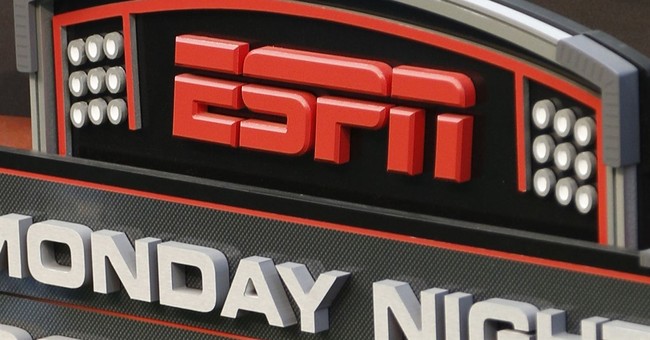 We need to return to our other favorite punching bag. Yes, we’re going to give CNN and Jim Acosta a break. Remember ESPN? The network that was once a flagship of sports journalism has been infested by political correctness and liberal bias. The effects have been visible. Since 2011, ESPN has lost 15 million subscribers. In April of 2017, longtime host Linda Cohn was suspended for suggesting the increasing political aspect of the network’s reporting and coverage might be responsible for the 10-million subscriber loss over the past five years at the time. I mean, when stuff like this happens with regards to commentator assignments, you’ve got to be kidding me.

There is no way a conservative @espn could -- or should -- have said these things about Obama. pic.twitter.com/ZhInBs1D1L

Then again, former employee Jemele Hill called President Trump a white supremacist on Twitter and wasn’t even punished for it. Then, stories came about employees pretending to be liberals in order to keep their jobs. Former ESPN reporter Britt McHenry said she was reportedly barred from liking tweets from conservatives of the social media platform.  The network isn’t doing so hot, and cuts were expected last year. And for 2018, ESPN has lost another two million subscribers. So, how much pain does a 15 million subscribers cause to ESPN? Clay Travis of Outkick The Coverage breaks it down. It’s not good…at all:

Now the positive for ESPN is that the rate of subscriber decline seems to have slowed this year, but the negative is that since 2011 ESPN has now lost 15 million cable and satellite subscribers. Those 15 million lost subscribers equate to $1.44 billion a year in lost yearly revenue that ESPN will never be able to book. (This is based on an $8 a month subscriber cost for ESPN multiplied by 12 months in the year.) Again, this isn’t just a one time yearly revenue loss, this is a loss in yearly revenue forever.

Now every cable and satellite channel is losing subscribers — as dumb Twitter users who don’t read this article will immediately respond in my mentions — but the impact disproportionately impacts ESPN for two reasons: 1. the network makes far more in revenue off the cable bundle than any other channel so it stands to lose, by far, the most off the collapsing business model and 2. the network has guaranteed tens of billions in sports rights fee payments over the next decade and more to sports leagues.

…unlike, for instance, CNN, which can simply cut back on costs for programming in the event revenues aren’t meeting projections, ESPN purchased much of its sports rights years ago before the full impact of cord cutting had become apparent to their executives. (The Wall Street Journal referred to these ESPN executives, who denied the impact of cord cutting, as “flat earthers” in a recent article).

ESPN’s albatross of an NBA deal, for instance, which is presently facing a substantial ratings decline in the wake of LeBron James’s move to the west coast and costs the network over a billion dollars a year, was signed before the network knew its cable and satellite business was going to collapse. That NBA deal, which I wrote about quite a bit in my new book, Republicans Buy Sneakers Too, will cost Disney billions and billions of dollars a year at the tail end of the deal, when ESPN will be paying out far more for NBA games than they can recoup in subscriber fees.

If you ever watch ESPN now and wonder, why do they spend so much time on LeBron and the NBA, this is the reason. It’s because they so wildly overpaid for the NBA television rights that they are desperately trying to keep ratings as high as they can by overcovering every minor detail in NBA action.

And if you thought ESPN was overcovering the NBA now, can you imagine ESPN without the rights to even show NFL highlights? How does SportsCenter exist without NFL highlights? Put simply, it can’t. So even if ESPN saves money by not paying for Monday Night Football, the NFL has the network over the barrel anyway, they can just charge more for the highlights.

You should’ve just stuck to sports, ESPN. You've cooked yourself quite the turkey.