Incoming House Democrat: I Fear Retribution If I Don't Support Pelosi For Speaker 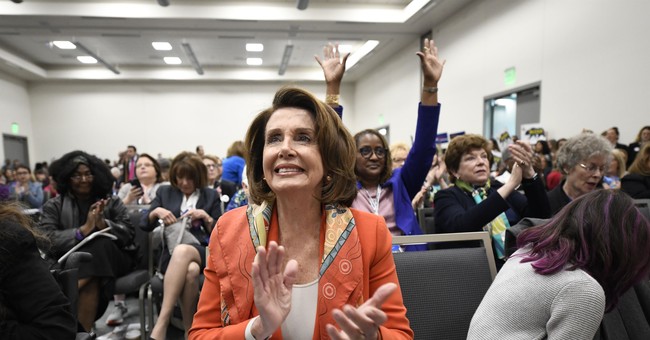 House Democrats could be on the verge of a massive leadership fight. Rep. Nancy Pelosi (D-CA) wants that speaker’s gavel back in her hands. The problem: she may be short of the votes. The anti-Pelosi wing, or Never Nancy-ites, are sticking together for now, but they don’t have a candidate. Lauretta wrote that Rep. Marcia Fudge (D-CA), could be a potential challenger (via WaPo):

Rep. Marcia L. Fudge said on Thursday that she has been “overwhelmed” by the support from many of her colleagues for her possible entry into the race for House speaker, becoming the first Democrat to publicly acknowledge a challenge to longtime party leader Nancy Pelosi.

“Over the last 12 hours, I’ve been overwhelmed by the amount of support I’ve received,” Fudge said in an interview with The Washington Post, adding that there are “probably closer to 30” Democrats who have privately signaled that they are willing to oppose Pelosi.

“Things could change rapidly,” Fudge said with a smile as she sat in her office, with her phone buzzing nearby.

Fudge, 66, a former chair of the Congressional Black Caucus, said she is building a diverse coalition as she mulls a speaker run, talking with allies on the CBC, moderate Democrats, and newly elected members.

Pelosi doesn’t seem to be worried, telling Fudge to “come on in, the water’s warm.” Yeah, that’s not creepy at all. Before Fudge makes a decision on whether to help Nancy ‘Buffalo Bill” Pelosi get her sofa in the truck, it’s a trap, folks, there will have to be a solid commitment from this wing of the party to boost Pelosi—and that could mean burning some bridges with senior members of the caucus.

CNN’s Manu Raju asked Drew whether he is concerned about backlash if he doesn’t support Pelosi and she does become speaker.

“I guess, you know, to be totally objective, I would have to say yes,” Drew said. “However, I’m always very hopeful that we all rise above that, and this is America and we’re allowed to have different viewpoints.”

Does Van Drew know which party he is a member of? The Democratic Party is ‘you follow Pelosi-Schumer or else.’ There’s no deviating from that unless you want to be rendered a pariah.

So far, there doesn’t seem to be any buckling from this crop that wants to move on from Nancy. Pelosi, on the other hand, is confident she has the votes. The vote on the speakership will be held at the end of the month (via ABC News):

A band of House Democrats determined to oppose House Minority Leader Nancy Pelosi's speaker bid are planning to release a signed letter as soon as this week indicating that they have gathered enough support to deny her the 218 votes needed to win the gavel on the House floor in January, a move they say would complicate her path to a second term as speaker and force renewed discussion about her stepping aside.

Prominent Democrats outside of Washington D.C. – from New York Gov. Andrew Cuomo and Pennsylvania Gov. Tom Wolf, to former Sen. John Kerry and former Vice President Al Gore – have been making calls on her behalf, and influential House Democrats and activists have provided a steady drumbeat of public endorsements.

But Pelosi's critics argue that she has an increasingly apparent math problem. While she's expected to lock up the caucus speaker vote with a majority of members on Nov. 28, they're hoping to publicly release their letter before that vote to hammer their point home.

ABC News has identified at least 14 sitting Democrats and incoming members who have vowed to oppose Pelosi on the House floor.

Sources involved in the effort say that number has grown to at least 20 members, with many more incoming Democrats undecided. Pelosi can only afford to lose six votes – a number that could grow to 14 if Democrats win the eight House races yet to be called.

The candidate search continues for the anti-Nancy group.