CNN Host On Bomb Scares: This Is What You Get When Trump Gets The 'CNN Sucks' Chant Going 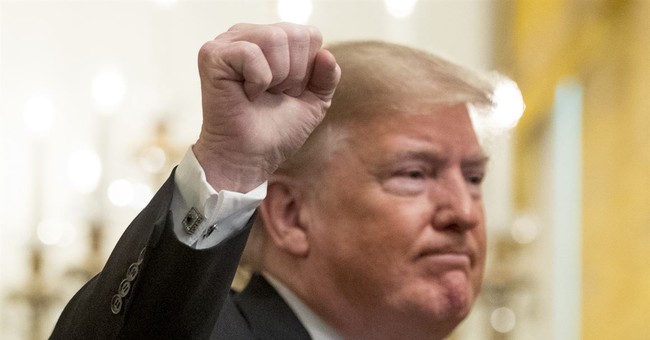 On Friday, authorities arrested a man allegedly responsible for the 13 explosive devices that targeted CNN, the Obamas, the Clintons, John Brennan, Eric Holder, and other prominent Democrats and celebrities. The suspect’s name is Cesar Sayoc—and yes, he seems to be off his rocker (via Daily Beast):

Cesar A. Sayoc, the Florida man reported to be the mail bombing suspect, frequently posted conspiratorial pro-Trump messages on Twitter or made threats to Democratic leaders, including some who would later receive potentially explosive devices in the mail this week.

Sayoc—who was named by several national media outlets as the man authorities arrested Friday in connection with the attempted bombings—tweeted frequently from what appears to be his account: @hardrock2016.

The account and his Facebook profile, which feature pictures of Sayoc, 56, at Trump rallies, also contain some of the same images plastered to Sayoc’s van, including flags for Florida’s Seminole tribe and collages of pro-Trump and anti-CNN meme stickers.

The Florida man has a significant criminal history and was previously charged with making a bomb threat in 2002. The ruling in that case was not immediately clear on Friday. Sayoc was also convicted of theft in 2014 and 2013, and battery in 2013, public records show.

In 2012, he filed for bankruptcy, and declared in court filings that he lived with his mother.

Sayoc sent multiple threats to Democrats and anti-Trump personalities, but from his record, he was already a nutty person prior to Trump’s rise on the political scene; his first bomb threat was in…2002. We’ve had Bernie Sanders supporter James Hodgkinson try and kill scores of Republican congressmen in 2017; Rep. Steve Scalise (R-LA) was shot and almost died in the assault. We’ve had ricin letters sent to Secretary of Defense James Mattis, GOP candidates assaulted in Minnesota, the Minnesota Democratic Party spokesperson say that Republicans should be sent to the guillotine. Former Attorney General Eric Holder said that Democrats should “kick” Republicans, but all of this is Trump’s fault in the eyes of the elite media. History did not begin until 2016 for some—and don’t even mention past examples of violent rhetoric from the Left to media figures, as we saw in the exchange between conservative Erick Erickson and MSNBC’s Katy Tur.

Bash made the link while commenting on the white van believed to be connected to a suspect arrested Friday in the investigation of the mailed bombs, which have targeted Democrats. Two were addressed to former Obama administration officials at CNN's New York address.

Bash noted that the white van, which has a number of conservative political stickers on it, including a "CNN Sucks" sticker.

"That image, CNN Sucks — of course the president didn't direct this, he's not technically responsible for it," Bash said.

"But he is responsible for not just allowing the chant 'CNN Sucks' at his rallies. But stoking it. Making clear that he likes it. And all you need is one, forgive me, crackpot. And we have been saying this for two years. And looks like one may have emerged. And that is the danger," she said.

Well, for starters, CNN does suck. They’re anti-Trump. They’re liberal. And they deserve to be criticized. They do not deserve to be subjected to bomb threats or scares, of course. You can disagree. You can bash the network mercilessly for their shoddy coverage of this White House. The VAST majority of Americans understand this.

What is not okay is for these same media figures to argue, directly or indirectly, that free speech should be curtailed because they don’t like being criticized. And these are the same folks who warn that the president is supposedly trying to clamp down on press freedoms and First Amendment rights. You can’t have it both ways. America is hard, folks. We all know this. We have to tolerate some of the most despicable elements of society, like Antifa, Planned Parenthood, the Democratic Party, but they have every right to voice their opinion, their policy items, and advance their agenda, or at least attempt to do so. The same rules apply to us…on paper. It’s no secret that if you’re a liberal, you can get away with an awful lot more in the corruption and abuse categories.

Editor's Note: Headline has been tweaked.