The One GOP Senator Who Is Becoming A Thorn In The Side For Democrats This Cycle; UPDATE: He's Up Six Points 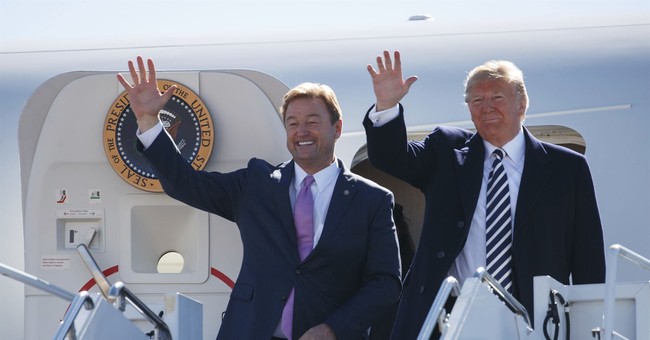 Sen. Dean Heller (R-NV) represents a state that was carried by Hillary Clinton in 2016. It’s competitive due to the Democratic and labor union bastion that is Las Vegas, and its Latino voter base. Heller just squeaked by in his 2012 race. With Democrats jacked up, as they are this cycle, you’d think Heller would be updating his resume and the media penning his political epitaph. Not the case, in fact, as Heller could survive the Democratic onslaught, even as Obama dropped in to help his opponent, Democratic Congresswoman Jacky Rosen. On paper, he’s still one of the most vulnerable Republican incumbents on the 2018 map.

Yet, Democrats are now starting to worry about Rosen’s chances and the Latino voter bloc, which could tilt the whole race, is not a good gauge for those who will actually vote. Hispanic voters, especially young Latinos, and other Millennials once again prove to be a major disappointment when it comes to voter participation for Democrats. They spend heavily to reach these voters, only to have them say straight up that they shouldn’t be counted on to turn up at the polls.

Former Sen. Harry Reid has built an effective Democratic machine, which Republicans have acknowledged is formidable, but feel that they’ve been able to better that system this cycle (via Politico):

National Democrats are flocking to Nevada to prevent a massive disappointment in a state that has gone blue in three successive presidential elections — but proven tougher for the party in midterm years. Former President Barack Obama is headlining a rally for Rosen and the entire Democratic ticket Monday afternoon, just after ex-Vice President Joe Biden rallied at the local Culinary Union headquarters on Saturday, the first day of early voting. Sen. Bernie Sanders will campaign for the congresswoman later this week.

Mike Slanker, a longtime strategist for Heller, said the Republican is “often underestimated” but that he’s a proven winner. Heller won three campaigns for secretary of state before leaving for the House, and he ultimately won his first Senate race in 2012 even as Obama carried Nevada by more than 6 percentage points.

“Dean Heller connects with people, he just does, he always has,” Slanker said. “There's a reason he's won every election he's always run for. People like him.”

Democrats' ground game is scattered among different groups. As of one week prior to the start of early voting, the Nevada Democratic Party knocked on 275,000 doors and reached 800,000 voters by phone call and text. The Culinary Union, which has more than 57,000 members, allows for a leave of absence to canvass, and its field team has knocked on nearly 200,000 doors and had conversations with 40,000 voters so far. The union also provides rides to voting locations.

Republicans acknowledge the success of the ground game built by Reid, but say they’ve developed a turnout operation that surpasses it. The Republican National Committee has invested heavily in Nevada, training more than 2,000 fellows in the state to work with party staffers and volunteers. Dan Coats, the RNC’s state director in Nevada, said the operation is successful because it’s permanent, with neighborhood volunteer teams engaged continually since 2016. In August, the RNC announced it had made 1 million voter contacts in Nevada this election cycle, surpassing its total for the entire 2016 cycle. As of Monday, it had made more than 2 million voter contacts, an effort that Coats said is “historic and unprecedented.”

“I believe you saw the best the Democrats had to offer and it was great,” said Michael McDonald, the chairman of the state GOP. “I believe we surpassed that this year.”

Well, it seems Heller’s retail politics and the GOP’s outreach efforts are paying off in the closing days of this race, which has been close. A new Reuters/Ipsos/UVA Center for Politics poll has Heller up six points over Rosen:

Heller is the only Republican senator defending a seat in a state that Democratic presidential nominee Hillary Clinton won in 2016.

The Reuters/Ipsos/UVA poll was conducted online, in English, from Oct. 12 to 18. It surveyed at least 1,137 people in each state.

Blue wave? It doesn't appear to be happening in Nevada.