Kavanaugh Confirmation Vote: Here's How Senate GOP Is Handling The Absence Of Steve Daines On Saturday 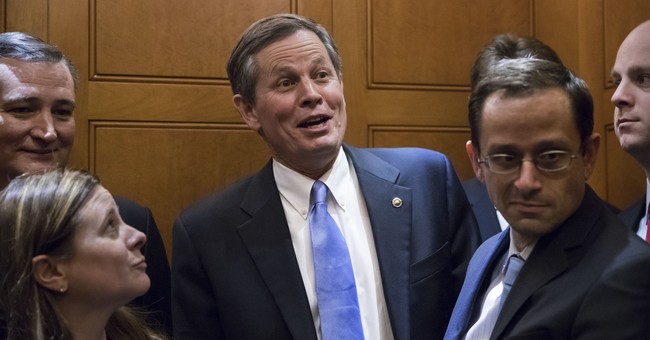 Sen. Steve Daines (R-MT) will not be around this weekend for the proposed final vote on the Supreme Court nomination of Brett Kavanaugh. He’s now become another key vote in this process. His daughter is getting married this weekend and he’s going to walk her down the aisle. It’s non-negotiable—and it’s all happening in Montana. Sen. Jeff Flake (R-AZ) sided with Democrats last Friday in backing a delay for an FBI investigation to vet the three sexual misconduct allegations—all of which have zero evidence or corroborating witnesses—hurled against Kavanaugh at the last minute. Sens. Joe Donnelly (D-IN) and Heidi Heitkamp (D-ND), two possible Democratic crossovers, said they’re not voting in support of Kavanaugh. Joe Manchin is still unknown. And the usual three—Sens. Flake, Collins (R-ME), and Murkowski (R-AK)—are also up in the air. We did have the votes last Thursday. Flake’s last minute stabbing in the back bungled the plan. So, the weeklong delay is over. The report from the FBI is done. And it says what we’ve known since the beginning. There’s no corroborating evidence. Nothing. It’s time to vote.

Donald Trump Jr., tweeted last night that Daines is a good friend, and that his situation is being covered. What does that mean? Senate Majority Leader Mitch McConnell filed a cloture motion Wednesday night. The vote to invoke it is today at 10:30 A.M. the final vote would then be teed up for Saturday. With Daines out of D.C., the vote could be held open for hours until he’s able to fly back in the middle of the night and cast his vote. Daines has become a key vote in the Kavanaugh confirmation battle. We probably can’t do this without him:

GOP MT Sen Daines tells Kavanaugh “he has made arrangements to be there to get him across the finish line as needed.” Daines initially said he may miss the Sat confirmation vote. Daines’s vote is essential to get the math to work. Daines’s daughter is getting married in MT Sat pic.twitter.com/5naEq36edR

Due to wedding of Daines’s daughter..the key part of Daines’s statement about being there to vote for Kavanaugh is “as needed.” Daines can be absent (99 sens voting) & they can still confirm Kavanaugh 50-49 if they get Flake, Collins & Murkowski..or lose one of them & get Manchin

On Fox, GOP MT Sen Daines suggests Kavanaugh confirmation vote could be held open for him to return to DC to vote on Kavanaugh if necessary after his daughter’s wedding: “Votes are held open all the time before the U.S. Senate..The magic number is 50.“

Most Senate votes take 20 mins.
Sen. Steve Daines (R-MT) is supposed to walk his daughter down the aisle Saturday at her wedding in Montana. However, Daines’s services could be essential to cast the decisive ballot to confirm Brett Kavanaugh as a Supreme Court Justice Saturday.

Daines suggests on Fox they may leave the Kavanaugh confirmation vote open for hours on end Saturday as Daines hightails it back to Washington after attending his daughter’s wedding in MT. It wouldn’t be the first time the Senate’s held open a vote for an inordinate period.

So, let’s hope there is a working protocol set in place for him. It’s going to be a tight one, folks.