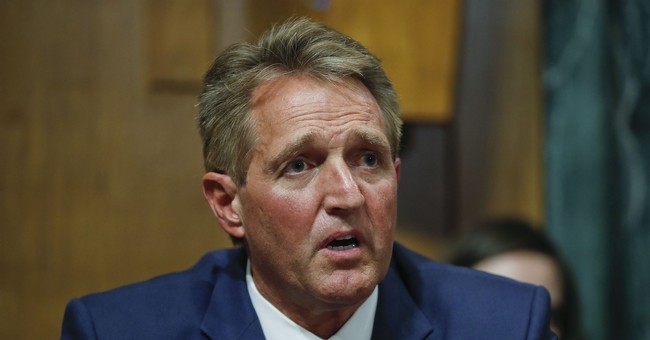 The final vote on the confirmation of Judge Brett Kavanaugh for the U.S. Supreme Court is coming soon. It’s on the horizon. It’s happening this week. It was suppose to be a smooth confirmation. It was looking like it. Then, sexual misconduct allegations were hurled at Kavanaugh. Three are the subject of a renewed FBI investigation—and all three are without evidence or witnesses. The most outrageous one—that being Kavanaugh was part of a gang rape ring—has quickly come apart. But Democrats need a scalp. They need to block this nomination at all costs. They cannot allow this man to be seated and cement a solid conservative majority on the Court. They’re playing dirty. The GOP should’ve played even dirtier. There was unity. There was a set game plan. And then Sen. Jeff Flake (R-AZ) in a titanic moment of stupidity, decided to support Democratic motions to have the FBI look into these matters and delay the vote. The GOP has a slim Senate majority. They can only afford to lose two votes. Right now, there are five wild cards, but prior to Flake stabbing the party in the back—we had 51 votes, according to a Senate insider who spoke with Townhall.

It’s the usual suspects: Sens. Heitkamp (D-ND), Collins (R-ME), Flake (R-AZ), Murkowski (R-AK), and Manchin (D-WV).  And some of these senators’ pressure points come from unlikely places. MSN reported that Murkowski could face pressure from Alaska Natives if she votes for Kavanaugh; they’re not too thrilled with him over some opinions about indigenous rights:

Ms. Murkowski must also take into account the vocal opposition that Alaska Natives, who make up one of her key constituencies, have to Mr. Kavanaugh’s confirmation. Mr. Kavanaugh’s views on indigenous rights came to the fore during his confirmation hearings after Senator Mazie K. Hirono, Democrat of Hawaii, who released a previously secret email in which Mr. Kavanaugh questioned Native Hawaiians as a protected group.

Alaska Natives have been strong supporters of Ms. Murkowski. The Alaska Federation of Natives, representing 186 federally recognized tribes in the state, raised $1.6 million and grass-roots support for her in 2010, when she ran a write-in campaign for re-election after a Tea Party challenger beat her in the Republican primary.

Ms. Collins is one of the senators who has faced the most pressure from protesters to vote against Mr. Kavanaugh. A group of liberal activists created a crowdfunding campaign that has raised more than $1.75 million that donors pledged would be given to her opponent if she votes for the judge’s confirmation. Still others have sent thousands of coat hangers to the senator’s office in Maine.

That pressure might have a different effect than intended: Ms. Collins has hotly criticized those efforts, describing the crowdfunding as “the equivalent of an attempt to bribe me.”

“I want to support him. I’m a conservative, he’s a conservative judge,” Mr. Flake told reporters last Friday. “But I want a process we can be proud of, and I think the country needs to be behind it.”

But before then, Mr. Flake had offered his own simple test: “If you believe her, you vote no.”

But the chief issue for the West Virginia senator is health care: Mr. Manchin, who has repeatedly voted against attempts to repeal the Affordable Care Act, has stressed that he wants the courts to conserve the act’s protections for people with pre-existing health conditions.

After meeting with Judge Kavanaugh, the senator said in a radio interview in July that he was not leaning in a particular direction, but found the judge to have “all the right qualities.”

Weeks before three women came forward to accuse Judge Kavanaugh of sexual misconduct, Ms. Heitkamp, who voted for Justice Gorsuch’s confirmation, told reporters that she had not yet seen any red flags in his record. In July, she said he seemed like a “fairly standard conservative judge” and “highly qualified.”

But Ms. Heitkamp has since made comments suggesting she is uneasy with the allegations against Judge Kavanaugh.

If I had to roll the dice, I would say if Flake, Collins, and Murkowski stick together, then Manchin joins, with Heitkamp joining the rest of her Democratic colleagues. Manchin has repeatedly said that re-election is not that important to him, and that he’s fine taking his ball and going home if he’s booted in November.

“Re-election is not the most important thing to me. The way I look at it is if you beat me, I go home,” he told Townhall back in January.

The problem is that if the trio vote like a bloc, and it looks like they will, then we have to be worried about the gentleman from Arizona. He’s morphing into a Democrat (via The Atlantic) [emphasis mine]:

Speaking with Jeffrey Rosen, the president of the National Constitution Center, and Democratic Senator Chris Coons at The Atlantic Festival on Tuesday morning, Flake called the judge’s interactions with lawmakers “sharp and partisan.”

We can’t have that on the Court,” said the Arizona senator, who didn’t elaborate on which interactions he was referring to.

Flake’s “gentleman’s agreement” with Coons, from Delaware, led to the FBI reopening its investigation into Kavanaugh late last week. The bureau is examining the sexual-assault allegations of Christine Blasey Ford, who also testified on Thursday.

On stage Tuesday morning, Coons and Flake both expressed dismay about the partisan brawling over Supreme Court nominees. Coons called for “reduc[ing] the frequency with which we describe judges as wearing red or blue jerseys.” He argued that senators need to commit to reviving the practice of confirming nominees based on their qualifications, not ideology.

Well, for starters, it is about blue and red jerseys, it’s about blue and red states, us and them, liberals and conservatives, and Republicans and Democrats. There are two sides. One side is the enemy. Get used to it. This is politics, an organization of our animosities. If you can’t stomach that, then get out. It’s a street fight from now on—and it looks like Flake just might screw us in the end, dashing his side’s chances of a generation-long conservative victory.