Larry King Criticizes CNN: They're 'Sorta Liberal' And No One Does News Anymore 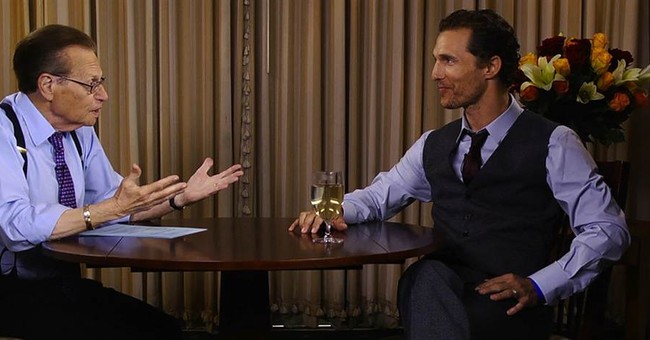 Remember Larry King? My grandmother used to watch him religiously. He was the man who had the open-ended interviews with some of the biggest names in the news, politics, and popular culture. He left CNN in 2010. Earlier this week, he lamented how there’s no news anymore. Not holding anything back, he even admitted that CNN has become “sorta liberal.” There is no news anymore. CNN has the panels that are 15-people deep. And the breaking news alerts are getting way overused. You can debate what you will about how we came to this juncture in cable news. Frankly, this wasn’t entirely a byproduct of Trump. We were heading down this road years prior to the 2016 election, but Trump’s upset win on Hillary Clinton injected steroids into the process. King spoke to Adam Carolla on his podcast Monday about all of this (via RCP):

King complained about the age of partisan cable news channels, the overuse of the 'breaking news' alert, and the lack of actual news aired on the networks. King was not afraid to criticize his long-time former network CNN. He said the network is "all panels," often with 8 (or more) guests.

The former CNN host said MSNBC is liberal, FOX News is conservative, and his former home is "sorta liberal."

"Everything is breaking news. Do you notice that?" King asked.

With CNN, yes, and they’re also the ones who have a countdown clock for everything. Even their series on decades, like The 80s, 90s, and 2000s, you’ve seen them advertised endlessly if you ever venture into that world. Yet, let’s be clear CNN is one of the most visible anti-Trump outlets out there. And King is saying what we all have known about the network for a long time. MSNBC was always liberal. Fox News was always conservative. It’s CNN that tried to have this veneer of impartiality, and tries to sell it too, but you can see right through it by just watching a few minutes. At Townhall, we make no effort to hide our slant. You know what you’re getting. Maybe CNN should just embrace their anti-Trump personality.