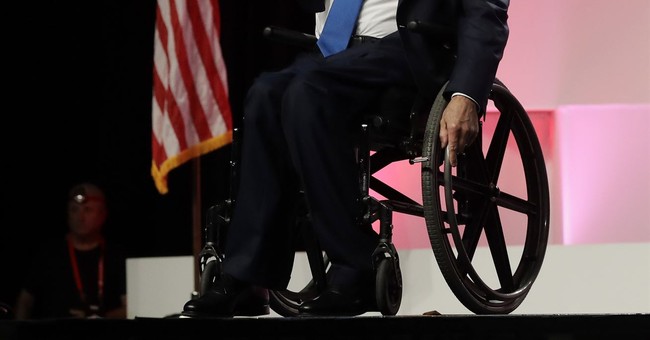 Special elections aren’t the best gauges for predicting the results of an election year, but since the liberal media touted such wins as a harbinger for the GOP apocalypse, let’s pop the champagne for the clutch win in Texas last night. Republican Gov. Greg Abbott has to be happy. This special state Senate election saw a Republican win in a district that’s remained in Democratic hands for 139 years. The GOP wasn’t even supposed to be competitive in this race; they ended up winning it by 6 points. Oh, and Clinton carried this district in 2016 by 12 points. Needless to say, Democrats were a little shell-shocked (via San Antonio Express-News):

“We conservatives are conservative in the way we make approaches. The gunfight’s not over until the last shot’s fired,” Flores told the Express-News after Gallego conceded in a phone call just before 9 p.m. “The last shot’s been fired.”

According the Secretary of State’s website, Flores won with 53 percent of the vote to Gallego’s 47 percent with 44,487 ballots cast.

Flores and Gallego competed in Tuesday’s runoff after emerging from an eight-candidate field in first- and second-place, respectively, in July’s special election to replace former Sen. Carlos Uresti. The longtime lawmaker vacated his seat in June after being convicted of 11 felony charges.

Christian Archer, Gallego’s campaign strategist, said he was shocked by the results, adding that they weren’t able to generate as much excitement as the Republicans.

“I don’t have any regrets, but I have a lot of disappointment,” Archer said.

Flores’ win marked an incredible upset in a district that political observers said shouldn’t have been competitive for Republicans.

So, before we all dig in deep for another day of Democratic hysterics over the unprovable and possibly false allegation of sexual misconduct that has been lobbed at Judge Brett Kavanaugh in an effort to derail his Supreme Court nomination, the GOP scored a win in a Clinton district in Texas.