Busted? There Are Some Fishy Things About The Upbringing Of This Far Left Ocasio-Cortez Wannabe Candidate 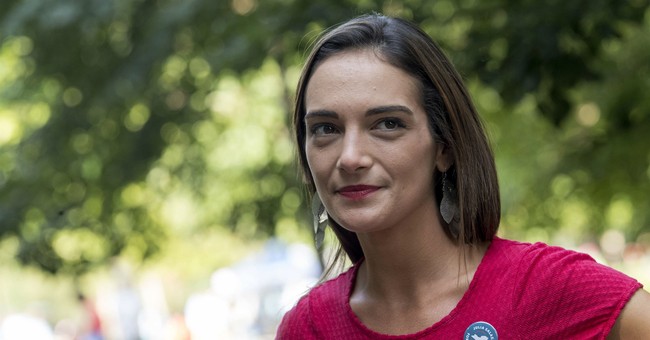 The race for New York’s 18th Senate district has been interesting. Far left candidate Julia Salazar is trying to position herself to pull off an upset against the Democratic establishment, like the one her colleague Alexandria Ocasio-Cortez executed in her congressional challenge to incumbent Democrat Joe Crowley. Yet, there have been allegations that she hasn’t been straightforward with her upbringing. What appears to have been the selling line was that she’s Jewish, working class, and immigrated here when she was a baby from Colombia. Well, it looks like she was from a well-to-do family, born in Miami, and was a pro-life, pro-Israel supporter who appeared on Glenn Beck’s program representing Christians United for Israel. Oh yeah, and her family is Catholic. Multiple outlets, left and right leaning, have reported on this woman that has made a local New York State Senate race somewhat interesting. Tablet made light of her political evolution from conservative to far left democratic socialist in a lengthy article back in August:

Social media postings, various articles, and the recollections of people who knew her at Columbia University show that in her early 20s Salazar was a right-wing pro-Israel Christian. In 2012 and into 2013, she was the president of Columbia Right to Life, the campus’s leading anti-abortion group. It was a position she took seriously. In October of 2012, Salazar hailed the university’s decision to end a supplemental program funded through student fees that paid for abortions, while also decrying that students were never informed that they were underwriting abortions through these fees. When a version of the fund was re-introduced, Salazar wrote an April 2013 op-ed in the Columbia Spectator wondering why there wasn’t similar help for students who decided not to terminate their pregnancies: “It is unacceptable for the University to provide support for students who have abortions while simultaneously failing to provide resources to accommodate those who keep their baby … we appear to imply that a ‘pro-life’ pregnant woman does not deserve the same rights as the woman who chooses to abort.”

In January of 2012, Salazar appeared on conservative firebrand Glenn Beck’s online show, where she was interviewed from Christians United for Israel’s annual Student Advocacy Leadership Training in San Antonio, Texas. “The anti-Israeli professors at Columbia—how many are there do you think?” asked Beck, who had proclaimed that some of the university’s faculty were “Muslim Brotherhood and communist” just moments earlier. “I think there are probably several,” Salazar replied. “They are using the classroom as their podium to spread lies about the State of Israel, to delegitimize the State of Israel, and to spread propaganda to Columbia students.” (On her campaign website, Salazar touts her “decade of experience as a local community organizer,” a period that includes her time as an activist with Columbia Right to Life and CUFI.)

By all appearances, the 21-year-old Salazar had both the politics and religious beliefs of a conservative Christian. In a series of tweets preserved by pro-Israel activist Hen Mazzig, Salazar quotes a pastor at Apostles Church in New York in a tweet that includes the hashtag #John13, referring to a chapter in the New Testament. “A thought I plan to ruminate on this week:” she tweeted in September of 2012, “Follow #Christ for his own sake, if you plan to follow Him at all,” quoting the 19th-century Anglican Bishop J.C. Ryle. One acquaintance who knew Salazar during her time as a CUFI activist said that she wasn’t shy about her religious faith, dropping the occasional “praise Jesus” into casual conversation.

In March of 2012, Salazar was one of over a dozen Columbia students to receive a stipend that allowed them to attend AIPAC’s annual Policy Conference in Washington.

More campaigning on your "identity" as an "immigrant."
"I immigrated to this country with my family when I was very little. In Colombia, my mom raised me as a single mother..." 0:37 seconds in. (HT to @liquidpaprtrail for the vid.)https://t.co/vHptsYBO3Phttps://t.co/FkBaJEk3HT pic.twitter.com/JhD818WlKw

Okay—that’s fine. Many of us undergo political evolutions, especially when you get a job and start paying taxes. Heck, some of those evolutions can occur within your political tribe. I was a Trump skeptic, but will undoubtedly vote for him again in 2020; Democratic overreach and liberal media hysteria has also helped push me into the Trump camp hardcore. Yet, Salazar’s main issue seems to be her fudging her backstory to fit a certain narrative, which her mother and brother have called her out for (via Free Beacon):

New York magazine City & State sat down with Alex and their mother Christine Salazar and discovered even more discrepancies in her life story.

Contrary to Salazar's claim that "my mom ended up raising my brother and me as a single mom, without a college degree and from a working-class background," her brother says they lived comfortably and their father made six-figures as a pilot and continued to pay child support following their divorce.

"We were very much middle class. We had a house in Jupiter along the river, it was in a beautiful neighborhood," he said.

Julia, in response, said since her parents separated when she was six, there were two years that she lived only with her mother before Christine Salazar graduated from college.

Salazar's claim that "I was raised by a single mom who didn’t have a college degree. My father didn’t graduate from high school," was also wrong, they said. Christine Salazar got a college degree in psychology when her daughter was eight. Her husband, Luis Hernan Salazar, attended high school in Santa Barbara, California, although it’s unclear whether he ever graduated from the school. Christine Salazar said it’s possible he received his degree from a night school as an adult if he did not in fact graduate from the California school as a teen.

The Salazars said there were times when money was a bit tight, such as when Luis Hernan Salazar was briefly laid off or late in his life when he went on disability. But they denied the assertion on Julia's campaign website that she began "working at a local grocery store when she was 14 to help make ends meet." Christine Salazar said she encouraged her children work to build character and because they didn't get an allowance, not out of necessity. John Sexton over at Hot Air had more on the odd history of Salazar:

What are people supposed to take from “I’m a Colombian-American” if not that she is Colombian? Also, “I immigrated to this country” can’t mean ‘I was born here but traveled to Colombia as a child.’ It would be very easy to say, ‘I was born in Miami,’ but she doesn’t say that.

…Where the site once described her as a “proud immigrant” it now says she is “a proud daughter of an immigrant father.”

It’s one thing to claim some staffer got your bio wrong when talking to the media and you overlooked it because you had too much to do. It’s quite another thing to claim the bio on your own website, written in the first person, got overlooked. That’s simply not plausible.

Salazar’s story, even the one she published yesterday, glosses over the period of her life when she clearly identified as Christian. In fact, it was only about 5 years ago that she rather suddenly announced she was Jewish.

Her explainer concludes, “I am not running on my identity. I’m running on my record.” That’s a good line, but no one in today’s far-left Democratic party can escape identity politics. The problem Salazar has is that she has been caught playing fast and loose with her own story.

The Daily Intelligencer also dug through her past in a lengthy article, where even they note has parts that “never stopped having that hard-to-pin-down quality that’s defined so much of her self-description.”

Yet, in these deep blue bastions, even a fake backstory isn’t a death sentence. Sen. Elizabeth Warren (D-MA) was able to get elected after peddling a false claim that she’s Native American. Now, some care more than others about this stuff, though it should be a universally honored principle, and even a few liberals have called out Warren for misconstruing her background after she was elected of course. The primary is being held today. Incumbent Democrat Martin Dilan reportedly has a base of support, being in office for nearly two decades, but his last challenge was in 2016, where a woman who admitted to abusing her children garnered 42 percent of the vote. So, anything can happen. We’ll see what happens tonight.