Get Wrecked: Think Progress Had A Meltdown After They Got Fact Checked By The Weekly Standard 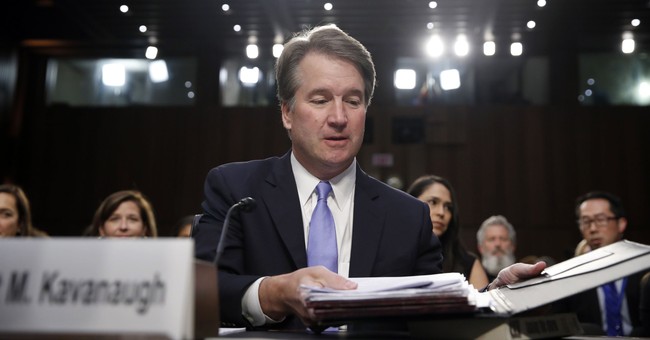 The liberal media was in full assault mode during the Supreme Court nomination of Judge Brett Kavanaugh. The main attack line is that once he’s on the Court, he will overturn Roe v. Wade. Pretty much the end of the world is upon us…if you live in CNN-land. The fact is that the Left has lost this battle. The GOP has the votes to confirm Kavanaugh. He will be seated, and conservatives will have a solid 5-4 majority on the Court. Yet, for Think Progress, a new front has opened up in their war against this nomination. The enemy is Facebook. Why? Well, the right-leaning Weekly Standard fact-checked them on the claim that Kavanaugh would overturn Roe—and Facebook agreed concerning social media distribution, adding the Standard piece below rating the claim as false. A meltdown ensued:

The reaction from the Think Progress guys to being accurately fact checked by @weeklystandard just goes to show some want fact checkers to be a cudgel against conservatives, not an actual service to weed out b.s.

Think Progress is the most dishonest group in the media. They are consistently and intentionally dishonest. They are not upset about Facebook using a specific source to call them out, they are upset that Facebook is calling out their dishonesty at all.

Who said it, infowars or think progress?

Facebook censored ThinkProgress because the Weekly Standard told them to https://t.co/ilZvWhQfwE

This is all going well https://t.co/dStIVACavL

Our article is factually accurate and The Weekly Standard’s allegation against us is wrong.

There are serious consequences for publishing an article that one of Facebook’s third-party fact checkers decrees to be false.

As Facebook CEO Mark Zuckerberg recently wrote in the Washington Post, “we demote posts rated as false, which means they lose 80 percent of future traffic.”

When an article is labeled false under Facebook’s third-party fact-checking system, groups that share that article on Facebook receives a notification informing them that the article received a “False Rating” and that “pages and websites” that share that piece “will see their overall distribution and their ability to monetize and advertise removed.”

Facebook’s notification regarding our piece on Kavanaugh and Roe v. Wade effectively warned outlets not to share ThinkProgress content or risk censorship themselves. One group emailed ThinkProgress after receiving this notification to say they found it “threatening.”

Kavanaugh cited in his confirmation hearing the “Glucksberg test” — which refers to Washington v. Glucksberg, a 1997 Supreme Court decision establishing that the Constitution does not protect a right to physician-assisted suicide. Under Glucksberg, courts should determine which rights are protected by the Constitution by asking which rights are “deeply rooted in this Nation’s history and tradition.”

Kavanaugh also said in 2017 that “even a first-year law student could tell you that the Glucksberg’s approach to unenumerated rights was not consistent with the approach of the abortion cases such as Roe vs. Wade in 1973, as well as the 1992 decision reaffirming Roe, known as Planned Parenthood vs. Casey.”

Our article also cited law professors Jim Oleske and Jamal Greene, both of whom reached similar conclusions regarding Kavanaugh’s embrace of Glucksberg.

Think Progress got called out for peddling liberal trash, which was also not true. And then, they have the temerity to say that Facebook is pandering and catering to conservatives.

“Facebook’s entire relationship with The Weekly Standard appears driven by reckless disregard for the truth,” they conclude. You know what’s worse about getting wrecked like this? Having fellow liberals say you’re wrong. Enter William Saletan of Slate:

This is a matter of fact, not ideology. On Facebook, headlines are far more visible and widely read than articles are. The headline on the ThinkProgress article was false. Kavanaugh didn’t say he would kill Roe. And the Standard was right to point this out.

The Standard has offered to withdraw the “false” rating if ThinkProgress changes its headline. But as of Wednesday, ThinkProgress hadn’t budged. Millhiser insists the headline is true. According to Merriam-Webster, he argues, “the verb ‘say’ or ‘said’ can mean to ‘indicate,’ ‘show,’ or ‘communicate’ an idea.” He maintains that Kavanaugh “indicated, showed, or communicated his intention to overrule Roe” by doing two things. First, a year ago, Kavanaugh said that a 1997 Supreme Court opinion, Washington v. Glucksberg, was “not consistent” with Roe and Planned Parenthood v. Casey, the 1992 opinion that reaffirmed Roe. Second, during last week’s hearings, Kavanaugh said “all roads lead to the Glucksberg test” as the Supreme Court’s rule for defining rights not enumerated in the Constitution.

This is an interesting argument. But it doesn’t show that Kavanaugh “said” he would kill Roe. Let’s start with the dictionary entry Millhiser cited. It defines “say” as “state,” “declare,” “utter,” or “recite.” The only cases in which the definition refers to softer interpretations—“indicate,” “show,” or “communicate”—are when the act is nonverbal. The dictionary gives two examples: “the clock says five minutes after twelve,” and “a glance that said all that was necessary.” Kavanaugh is a person, not a clock. He spoke in words, not glances. To prove he said something, you have to show he said it.

ThinkProgress and its allies have demonstrated why we need conservative journalists to help check facts.

Second, at his hearings, Kavanaugh was asked several times what he thought of Roe. He refused to address the substance of the case. It’s misleading to report that he “said he would kill Roe” when in fact he declined explicit invitations to say he would kill Roe.

Third, Kavanaugh’s 2017 remark that Roe, Casey, and Glucksberg were “not consistent” in their “approach” wasn’t absolute. He noted that although a majority of the court voted in Glucksberg not to assert a specific constitutional right to bodily autonomy (in that case, the issue was assisted suicide), a majority hadn’t voted that way five years earlier in Casey. (In fact, the court explicitly reasoned that Glucksberg and Casey were compatible.) Justice Anthony Kennedy, for whom Kavanaugh clerked—and whose seat Kavanaugh would fill—voted with the conservatives in Glucksberg but also voted in Casey to reaffirm Roe. So you can’t declare, as Millhiser does, that it’s a matter of simple logic to conclude that Kavanaugh “said he would kill Roe.”

Fourth, Kavanaugh repeatedly emphasized at his hearings that Roe could no longer be overturned on its merits alone. He said the court would now have to overcome the additional weight of Casey, which reaffirmed Roe based on stare decisis, a doctrine of deference to precedents.

So, there you go—it’s false—and if the Weekly Standard fact check wasn’t enough, this four-pronged stabbing of Think Progress’ claim is quite clear that the progressive outlet peddled straight trash. All they had to do was fix the headline, but they felt this was the hill to die on for some reason. Yet, Saletan offers a rare glimpse of honesty concerning liberal media bias. For one, he says we’re all fallible, that fact checking each other, regardless of the outlet, is good since being humbled is part of life and the reexamination of one’s work, and that what Think Progress did, ironically, was admit that there is a liberal media bias that’s often dismissed by members of the elite media, though known to everyone else—including liberals:

ThinkProgress and its allies have made the dispute into something much bigger. By attacking the fact check as biased on the grounds that a conservative magazine published it, they’ve proved the opposite of what they intended. They’ve confirmed that the press is full of left-leaning journalists who sometimes can’t see or acknowledge congenial falsehoods, and they’ve demonstrated how these journalists unite, when challenged, in a tribal chorus to accuse conservatives of trying to “censor” them. In sum, they’ve demonstrated why we need conservative journalists to help check facts.

Watching my colleagues rationalize the false headline, accuse the Standard of imposing ideological censorship under the guise of fact-checking, and castigate Facebook for allowing “non-reality-based organizations into the fact-checking community” is humbling. It’s a reminder that most of us, including me, are good at seeing other people’s biases but lousy at seeing our own. PolitiFact, in its initial report on the Kavanaugh hearings, said the nominee “raised a few eyebrows” when he “called birth control pills abortion-inducing drugs.” Days later, PolitiFact conceded that it had “repeated uncritically a Democratic talking point” and that Kavanaugh had actually been quoting a party in the case. I don’t see any of my colleagues on the left calling for PolitiFact to be removed from Facebook’s panel.

At Townhall, you know what you’re getting. We make no qualms about leanings, like Think Progress, and when I’m wrong—and I have been—I make edits as quickly as humanely possible. It’s the right thing to do. For Think Progress, they decided to lecture us and cite the dictionary to defend their shoddy headline, which was turned into sashimi by one of their own. Nice work, guys.