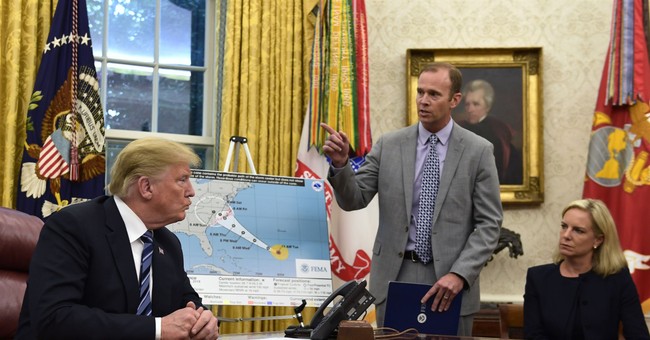 Hurricane Florence is barreling towards the east coast of the United States. Preparations are being made, evacuations have been ordered, and the Washington Post editorial board decided to bash President Trump, saying he’s “complicit” in the creation of this storm because…he’s not pursuing an anti-global warming agenda [emphasis mine]:

President Trump issued several warnings on his Twitter feed Monday, counseling those in Florence’s projected path to prepare and listen to local officials. That was good advice.

Yet when it comes to extreme weather, Mr. Trump is complicit. He plays down humans’ role in increasing the risks, and he continues to dismantle efforts to address those risks. It is hard to attribute any single weather event to climate change. But there is no reasonable doubt that humans are priming the Earth’s systems to produce disasters.

With depressingly ironic timing, the Trump administration announced Tuesday a plan to roll back federal rules on methane, a potent greenhouse gas that is the main component in natural gas. Drillers and transporters of the fuel were supposed to be more careful about letting it waft into the atmosphere, which is nothing more than rank resource waste that also harms the environment. The Trump administration has now attacked all three pillars of President Barack Obama’s climate-change plan.

The president has cemented the GOP’s legacy as one of reaction and reality denial. Sadly, few in his party appear to care.

No one cares, WaPo. No one. Global warming has consistently been ranked the least important issue with voters for years. This is an Acela Corridor concern, where rich liberals can whine and advocate about reducing carbon emissions with zero economic blowback. For rural America, millions of Americans will be out of work. No job retraining will do any good for their situation, and economic growth and activity could be severely curtailed. The job losses would be staggering. We’re the Saudi Arabia of coal, with enough to power our country and our economy for centuries. We’re at our most industrialized in the U.S. and air quality couldn’t be better.  Sorry, the science is not settled on this matter. We’re going to hear about extreme weather in the coming days—and how Trump is some semi-God who conjured it out of thin air, or something—but we had the calmest hurricane season in 30 years back in 2013. In that same year, we experienced the quietest tornado season in 60 years. High Atlantic hurricane activity was said to be decreasing, according to studies three years ago. Oh, in 2007, the Arctic Ice Cap was projected to be gone by 2013. In reality, it grew by 533,000 square miles. There was global cooling in the 1970s and early 1980s, and now we have global warming. The experts were wrong then, and they could be wrong now, which is why I’m not willing to gamble trillions on a brain trust that consistently shifts. Science is never settled; that’s why there are 40th, 60, and 87theditions of textbooks for chemistry, biology, physics, and so forth. The arrogant position that this is settled science is one that a liberal must take. There cannot be room for questioning, which creates cracks in the narrative that more government control in the hands of fewer people to enact changes gets undercut. It has to be settled in order to break institutions and bend them to do their bidding. That’s progressivism. All bow before Zod. Well, millions of Americans don’t—and we certainly aren’t going to give in to some liberal pet project that gambles with other people’s money on theories that could be as half-baked as when these folks thought glaciation would start again in the 1970s.