Grasping At Straws: As Expected, The Kavanaugh-Snubbed-The-Parkland-Father Story Got Overblown 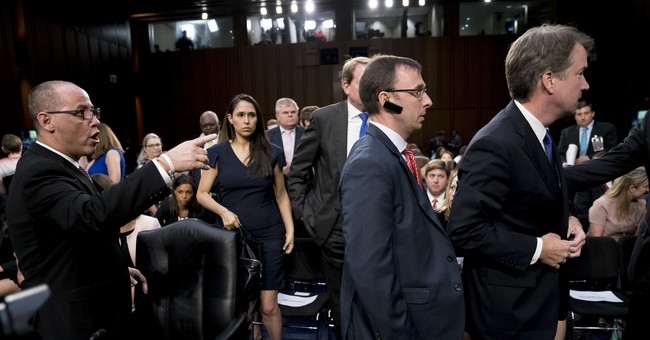 The Supreme Court hearings for Judge Brett Kavanaugh are over, as is this whole ball game. The Republicans have the votes to confirm him. He will be seated on the Court. The Left will have a meltdown. The cycle repeats itself. Most of the Democratic meltdown coverage was focused on Sen. Cory Booker’s (D-NJ) non-I am Spartacus moment and the painfully staged whinefest over document releases and transparency from Kamala Harris, Richard Blumenthal, Dick Durbin, Amy Klobuchar, and others; everyone knew they weren’t going to vote for Kavanaugh, so why even entertain their motions. That’s exactly what Senate Judiciary Committee chair Chuck Grassley did. He went ahead. Nevertheless, he persisted.

But one episode of this saga was just ridiculous. During the hearings, Fred Guttenberg, a father of one of the Parkland shooting victims, came over to shake Kavanaugh’s hand. The Left would have you think that Kavanaugh refused, and that he recoiled. So, of course, the Democrats pile on, and Kavanaugh doesn’t care about gun violence. The media reaction, the overreach—it was appalling.

So out of all of the interviews, tv appearances, clips & highlights of the handshake yesterday, how many also ran this tweet? pic.twitter.com/TMGBluzEMR

First of all, Kavanaugh was probably mentally exhausted; there are people everywhere, and cameras flashing endlessly in your face. The whole controversy was just ridiculous—and this event, plus White House lawyer Zina Bash throwing up a white power signbehind Kavanaugh during the hearings just showed how dumb liberals can make our politics. Bash by the way is half-Mexican and Jewish. So, progressives would have us believe that a half-Mexican, Jewish woman was secretly a Nazi throwing up white power signs that don’t exist, save for the imagination of the most afflicted by Trump derangement syndrome. Anyway, Allahpundit has the best and most accurate take on this non-controversy last week:

Anyway, judge for yourself. There are two versions below. To me it seems obvious what happened: After a morning of protesters being hauled out of the room for being unable to restrain themselves, Kavanaugh decided not to let himself be grabbed by someone he didn’t know, especially with security moving quickly to intervene. Whether he heard Fred Guttenberg introduce himself or not, only he knows. Just understand that to believe the worst interpretation of the footage, you need to believe that this guy, who’s been angling to get himself nominated for the Supreme Court since his 20s, would deliberately snub a murdered kid’s father at his confirmation hearing in full view of rolling cameras. He’s spent 30 years working towards this very moment, the whole country’s watching, up comes a Parkland dad to lobby him to … change his lifelong view of the Second Amendment in the next five minutes, I guess, and Kavanaugh backs away not for safety reasons but because a two-second grip-and-grin would be impossibly icky to him. That’s the Democratic view of this. Our politics is tremendously, tremendously stupid.

As Judge Kavanaugh left for his lunch break, an unidentified individual approached him. Before the Judge was able to shake his hand, security had intervened. https://t.co/ylOhtA1s6G

God, this criticism is stupid, especially after watching the second clip: https://t.co/dmouMrKXVq

Blessedly, the antics are done. Kavanaugh will be confirmed, but not before making clowns on themselves and this process. The Wall Street Journal took a knife to the Democrats’ nonsense antics, though anyone with a brain could have made sashimi out of their crap.

The main charge is that Mr. Grassley is “denying” crucial documents to “hide” Judge Kavanaugh’s record. The Senators are ignoring the 307 opinions he has written, and the 17,000 pages of material he provided in response to the committee’s questionnaire—the most extensive ever demanded of a nominee. The Senators have already received more than half a million pages about his time as a lawyer and judge—more documents than were provided for the past five Supreme Court nominees combined.

Most of these documents are privileged, and for good reason. They represent high-level deliberations that require honest advice. When Democrat Pat Leahy ran the Judiciary Committee, he didn’t even ask the Obama White House to provide documents from Elena Kagan’s tenure at the Solicitor General’s office, though they surely were relevant to her legal views.

Democrats portray Mr. Kavanaugh as some Trumpian legal gargoyle, but he’s the epitome of a mainstream legal conservative that any GOP President would have had on his short list. Some 97% of the opinions and orders that Judge Kavanaugh took part in over 12 years on the federal bench were unanimous. He was in the majority 98% of the time.

Once again, we won, and you lost.