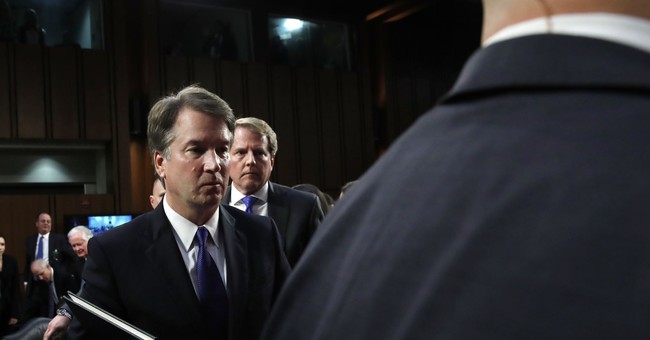 "I believe you will see the judge recognize the man and the gesture," Cuomo said during an interview with Seth Meyers. "He does nothing. Turns away. And then security escorts him. [But] the White House says I’m completely wrong, that the video is clear evidence of the judge wanting to connect, not having time because he was whisked away by security.”

All that was said before Judge Kavanuagh was being pulled away is: "I am Fred Guttenberg", what did Kavanaugh do wrong again? Fred said: "he pulled his hand back" which never happened.

These happenings are quick and confusing in the moment, but nothing was done with malice. https://t.co/KZKnZ2mOyS

Matt already debunked one controversy to arise from the Brett Kavanaugh hearing Tuesday. Critics charged that one of Kavanaugh's assistants was giving the white power hand signal. In reality, she was just sitting with her hand on her arm.

Then, Fred Guttenberg, a father who lost a daughter during the Parkland shooting in February, suggested that Kavanaugh snubbed him during the hearing.

Democrats like Sen. Kamala Harris (D-CA) shamed the nominee for his behavior and she too suggested it had something to do with his politics.

However, Ed Morrissey over at Hot Air shared a couple videos that show Kavanaugh may not have heard Guttenberg or had been confused because security had quickly intervened before he had a chance to react.

Fred Guttenberg, father of Parkland victim, Jaime, tries to shakes hands with Brett Kavanaugh: "My daughter was murdered at Parkland."

White House says an "unidentified individual approached" Kavanaugh, but "before the judge was able to shake his hand, security had intervened." pic.twitter.com/IerpDMOW0h

In addition to these two odd controversies, there were plenty of fireworks during the hearing itself.