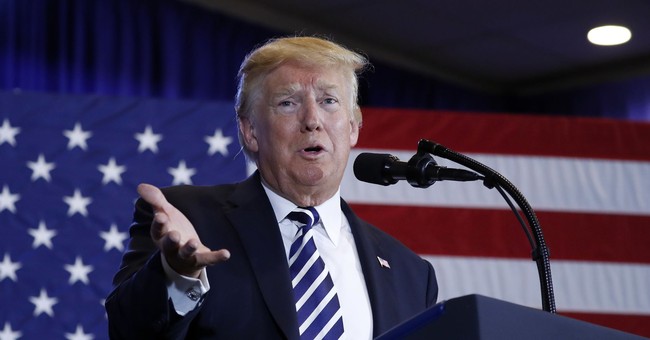 President Trump’s relations with the press are contentious, and today’s events just offered more justification for his aggressive nature with the elite news media. Apparently, off the record means nothing now that Donald Trump is in office. The president is in the midst of renegotiating the North American Free Trade Agreement between Mexico and Canada. Bloomberg News had a meeting with the president, where he said some portions would be OTR. Someone at Bloomberg appears to have leaked these details to the Toronto Star, who ran with it. The story is not 100 percent verifiable, which the Star admits, so just shows you where newsrooms are nowadays. Trump was speaking about how he was not going to compromise with Canada in the new trade talks…reportedly [emphasis mine]:

In remarks Trump wanted to be “off the record,” Trump told Bloomberg News reporters on Thursday, according to a source, that he is not making any compromises at all in the talks with Canada — but that he cannot say this publicly because “it’s going to be so insulting they’re not going to be able to make a deal.”

“Here’s the problem. If I say no — the answer’s no. If I say no, then you’re going to put that, and it’s going to be so insulting they’re not going to be able to make a deal ... I can’t kill these people,” he said of the Canadian government.

In another remark he did not want published, Trump said, according to the source, that the possible deal with Canada would be “totally on our terms.” He suggested he was scaring the Canadians into submission by repeatedly threatening to impose tariffs.

“Off the record, Canada’s working their ass off. And every time we have a problem with a point, I just put up a picture of a Chevrolet Impala,” Trump said, according to the source. The Impala is produced at the General Motors plant in Oshawa, Ontario.

Trump made the remarks in an Oval Office interview with Bloomberg. He deemed them off the record, and Bloomberg accepted his request not to reveal them.

But the Star is not bound by any promises Bloomberg made to Trump.

The Star was not able to independently confirm the remarks with 100 per cent certainty, but the Canadian government is confident they are accurate.

On the record, Trump told Bloomberg that a deal was “close,” that it could happen by Friday but might take longer, and that Canada ultimately has “no choice” but to make a deal. Bloomberg quoted these remarks.

But then he said, “Off the record: totally on our terms. Totally.”

“Again off the record, they came knocking on our doors last night. ‘Let’s make a deal. Please,’” he said.

Uh, this sounds a lot like Trump made off-the-record comments to Bloomberg reporters and one of them leaked it to another outlet. https://t.co/F8TKlti824 pic.twitter.com/74ExasVVdr

A Bloomberg spokesperson on the Toronto Star's publication of off-the-record comments from Trump in Bloomberg's interview: "When we agree that something is off the record, we respect that."

How is this possibly justified according to journalistic principles?

I found this part interesting: “The Star was not able to independently confirm the remarks with 100 per cent certainty, but the Canadian government is confident they are accurate.”

Needless to say, things with Canada were already rocky with these new trade negotiations (via WaPo):

High-stakes trade negotiations between the White House and Canadian leaders unraveled Friday, amid strains caused by lingering divisions and comments President Trump made that suggested he would refuse to offer any concessions.

The breakdown put Trump’s effort to redraw the North American Free Trade Agreement in legal limbo. The White House formally notified Congress on Friday that it will enter into a trade agreement with Mexico. The letter stipulated that Canada could also be added “if it is willing.”

But it is unclear whether a three-nation trade pact can be replaced under congressional rules with a two-nation agreement. White House officials vowed to continue discussions with Canada, and talks are expected to pick back up on Wednesday.

“The talks were constructive, and we made progress,” U.S. Trade Representative Robert Lighthizer said in a statement.’

But Trump seemed willing to leave Canada out of a final deal.

Leaving out the trade talks, this is a total trash move. It just shows the level of animus people still hold over from the 2016 election. While a tad over the line, you can understand why Trump bashed the press as the “enemy of the people,” especially on this issue. Trump ran on getting better trade deals that don’t hurt American workers in the Rust Belt and rural America. They’re biased. They’re anti-Trump. They’re the opposition press. For all the talk about how the media is not biased and doesn’t take sides—please explain this move. Like the alleged officials within our intelligence community—the deep state—there appears to be some members of the press who will do anything to hamstring this administration from governing because they don’t like the president. You know, middle school was fun, but you have to grow up. The media should expect Trump to bash them even more and more aggressively after this episode—and they deserve every minute of it.

Wow, I made OFF THE RECORD COMMENTS to Bloomberg concerning Canada, and this powerful understanding was BLATANTLY VIOLATED. Oh well, just more dishonest reporting. I am used to it. At least Canada knows where I stand!

WATCH: Former President Trump Addresses CPAC
Townhall
We give the WaPo's Glenn Kessler Four Pinocchios for this 100% false tweet on Donald Trump
Twitchy
Joe Biden Speaks in Houston, What Follows Should Make You Question Everything
Redstate
Biden's Latest Verbal Slip Might Be His Most Disturbing Yet
PJ Media