If You Want To Know Why Political Anger Is Becoming A Unifying Force, Point The Finger At Democrats 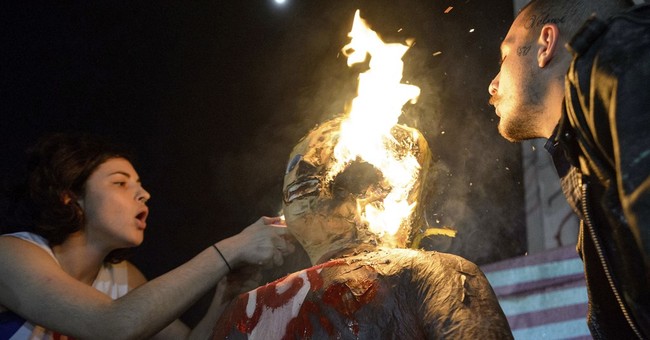 Washington D.C. is a snake pit. The people running the show are two-faced. They’re not good—and we shouldn’t be shocked when various forms of corruption are revealed. In fact, more often we're not. Voters know this deep down, which is why the cover-up is met with more ire than the actual allegation of misconduct. Yet, another issue that's dominating discussions among media pundits and voters is the increased partisanship. Isn't this what politics is all about: war by other means.

There is the Right and Left who are destined to be at war with one another. We have totally separate views on the role of government that cannot be reconciled—ever. It’s definitely “us” versus “them.” It is a battle between red states and blue states. It is a battle between Democrats (what’s left of them) and Republicans. I don't see this as a bad thing. I want to know who my enemy is, and they’re people who associate with donkeys in their party logo.

Seriously, I can’t see myself holding a civil conversation for long with a person who wants to expand abortion rights, have that be subsidized by federal tax dollars, confiscate guns, repeal the Second Amendment, increase taxes, ban straws, lecture us about so-called white privilege, and subject all of us under the cult of political correctness. I share nothing with these people. And please be honest at your anti-Trump rallies. You’re not calling on all Americans to unite for decency, which is yet another example of the Left lacking self-awareness because we all know they have none, it’s your side you want united. I’m totally okay with that. Go on and mobilize those whacko left wingers who shout racist epithets at black police officers and attack journalists. Get them on your side. You can keep them.

A recent New York Times article showed how bad things have become, or maybe it’s just how they always were; we've just chosen to ignore it for years. First of all, the piece leads off with some guy who tweeted that Texas deserved to be slammed by Hurricane Harvey. Yeah, he deserved to be torched. It all stems from the pains of 2016. It was just an election, Democrats. I know eight years of Obama has made you numb to this, but your side is going to lose—a lot. The same goes for the GOP. We endured your crap for eight years. We didn’t riot. We didn’t think we were in a constitutional crisis akin to a John Frankenheimer movie. We hunkered down and won midterm and presidential elections. Democrats could easily do this, but they’re still sour over Hillary’s epic 2016 loss. Also, if one has to point to sources of the increased tension, look to Democrats. For a side that preaches tolerance, they’re some of the most thin-skinned, petulant little sissies in the country (via NYT) [emphasis mine]:

Ken Storey was in a pique, the kind that often seizes and overwhelms the better judgment of people who follow politics closely these days.

Hurricane Harvey was about to douse Texas with deadly flooding, and Mr. Storey had identified the culprit: Republicans. “I don’t believe in instant Karma but this kind of feels like it for Texas,” he tapped out on Twitter, between bites of a taco over lunch. “Hopefully this will make them realize the GOP doesn’t care about them.”

While his case and the resulting backlash were extreme, Mr. Storey, 34, instigated the kind of zero-sum political confrontation that breaks out every day all across the country as politics seeps into and disrupts everyday life. To a degree that is unique to this period and this president, disputes over politics have divided Americans’ homes, strained marriages, ruined friendships and invaded the workplace.

A couple in Georgia, married two decades, won’t speak when the husband leaves his unwashed mug supporting President Trump in the sink; his wife refuses to touch it. A teenager eating at a Texas fast food restaurant had his “Make America Great Again” hat ripped off his head and a drink thrown in his face. A mother in New England sought the help of professional conflict mediators during the holidays because her two daughters — one who was pro-Trump, the other anti-Trump — had stopped speaking to each other.

Partisan identification is now a bigger wedge between Americans than race, gender, religion or level of education. The Pew Research Center, which for two decades has tracked demographic and partisan differences on issues like national security, immigration and the government’s role in helping the disadvantaged, found last year for the first time that the gap between Republicans and Democrats dwarfed gaps between people of different races, genders, religions and education levels.

There is a sense, especially among Democrats who recoil at Mr. Trump’s style of politics, that partisan affiliation reflects more than just a voting preference. Rather, it says something about your character. And where you come down on Mr. Trump is increasingly a decisive factor in whether or not someone wants to associate with you.

Sixty percent of Republicans and 65 percent of Democrats interviewed by Pew in a separate survey in March said that people who feel differently than they do about how Mr. Trump is handling his job probably do not share their values and goals.

Members of opposing parties not only express frustration with each other, they now say they are angry and afraid of the other side, Pew has found. Its director of political research, Carroll Doherty, said Pew had no comparative data to see whether this phenomenon has gotten worse since Mr. Trump took office because Pew had never before asked Americans’ about anger and fear in politics. It never seemed as salient as it does today, he said.

Thirty-five percent of Democrats, a Pew survey last year found, said learning that a friend had voted for Mr. Trump would put a strain of the relationship. Only 13 percent of Republicans said that of a friend’s vote for Hillary Clinton. The most educated and most liberal Democrats were most likely to say a Trump vote would complicate their friendships.

So, once again, it’s the Democrats, who already are down on America, who are working to make America a trash heap. Why? It’s because they lost. Meanwhile, these folks doing most of the whining are some of the most well to do segments of the country. Seriously, you’re making $200,000/year and you think because Trump won, you’re afflicted with “malaise.” The Acela Corridor is the cancer of this country. Frankly, if a liberal decides you cannot be friends with you because you’re a Republican, get a new friend. Screw them. Right now, we're in a dogfight. It's open warfare. The only thing you need to hope, or pray for, in this situation, is that those casualties are not as great on your side. For now, I’m not onboard with making things better between the two parties. Partisanship makes clear and allows honesty to take the helm. You don’t need to walk on eggshells in conversation due to today’s liberals erupting like Mount St. Helens over anything they view as problematic. You don’t like what I have to say, get the hell out of my house. I'm very open to any person changing my mind on this in the future--when temperatures cool--but for now–conservatives should operate as a wartime department.

Oh, and Mr. Storey has no regrets about the tweet. So, please tell me why I should feel bad that his life came shattering down, or why we have to be nice to these...people, because I don't think we need to in any way.