Keith Ellison To Ex-Girlfriend He Allegedly Abused: We Don't Have To Destroy Each Other Over This 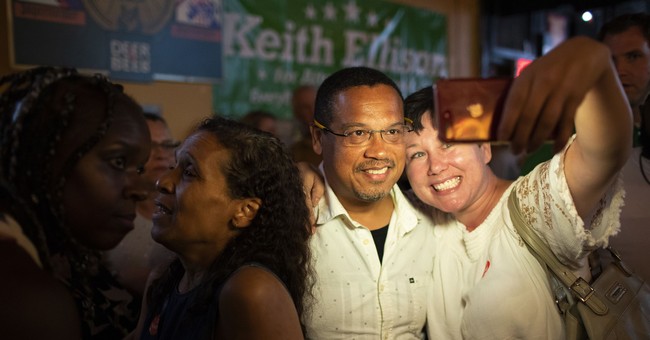 Rep. Keith Ellison (D-MN) won his state’s primary for attorney general on Tuesday, despite accusations that he was physically abusive to his ex-girlfriend. A few things: one, the Democratic National Committee, of which Ellison is a deputy chair, was silent until the very end on Election Day. Two, we all know if this were a top Republican lawmaker, it would have been given oodles of coverage.  Ellison addressed the accusations on CBS Minnesota:

It’s great to be the DNC. If Ellison were a Republican, the press would have knocked over the doors of the RNC demanding a statement. But the DNC’s co-chairman? No comment from the DNC. No feeding frenzy from the press. https://t.co/hqDDA7yLZz

In a WCCO exclusive, Rep. Keith Ellison also said he cannot understand why ex-girlfriend Karen Monahan accused him of abuse. The two had been in a relationship for several years, which ended in 2016.

WCCO’s Esme Murphy spoke with Ellison Wednesday afternoon, one day after winning the DFL primary in his bid to become the state’s next attorney general.

Ellison said he wants the record to be clear that he never abused his former girlfriend.

“I know I can’t just run past this controversy and not address it, which is why I’m here with you today,” Ellison said.

Esme Murphy: Did you every abuse her in any way?

EM: Did you ever drag her off a bed by her feet?

KE: No, absolutely not.

EM: She has said and insists that there is a video of this. Is there a video?

EM: And why couldn’t there be?

KE: Because I never did that. Simply didn’t happen.

EM: What would you say to her right now? Because she’s speaking out and continues to speak out on Twitter and social media.

KE: I’d say, “Look, we loved each other, we don’t have to destroy each other.”

Days before the primary, Ms. Monahan’s son, Austin, detailed the allegations against Rep. Ellison on social media (via Daily Caller):

“I was using my moms computer trying to download something and I clicked on a file, I found over 100 text and twitters messages and video almost 2 min long that showed Keith Ellison dragging my mama off the bed by her feet, screaming and calling her a ‘f**king bitch’ and telling her to get the fuck out of his house,” Austin wrote in a viral Facebook post.

“Sitting all this time, watching what our mom went through and not being able to say or do anything was hard as hell. None of you know the hell our family has gone through. I don’t think half of you would even care,” Austin added.

“We watched her so called political friends stand by say or do nothing. People had an idea what happened and never reached out to my mom. The same people who are posting about social justice are ready to smear my mom, protect a person who abused her and broke the law.”

Like her son, Monahan has also said that she expects to be smeared for speaking out against Ellison.

“I was well prepared for the smears, etc. It is exactly what I wanted to bring to light,” she tweeted Monday.

Over at Hot Air, Ed wrote that Monahan is refusing to release the infamous video described in her son’s Facebook post, and that there’s another woman alleging abuse against Ellison. Yet, he did note that by saying you have video and electing not to release presents a credibility issue for Ms. Monahan and Ellison. The two met on June 5, the night before Ellison officially filed to run for AG, where the tape was reportedly brought up. Ms. Monahan is said to have arranged for the meeting:

Why bring up the video as proof and not release it? That seems to present a credibility problem for Monahan, who instead was releasing text messages to prove that there was bad blood between the two after the end of the relationship. But it’s also a credibility problem for Ellison too, who initially denied knowing anything about a video. Now it turns out that he was aware of the potential existence of the video for more than two months before his denial yesterday.

Meanwhile, another allegation of potential domestic abuse involving Ellison emerged yesterday. This appears to be pulled from police records a decade before the alleged assault took place on Monahan, and it comes from a suburban Minneapolis councilman [Amy Alexander]

This account seems a bit sketchier; it’s based in part on an article written by the alleged victim in a newspaper that went defunct years ago. John Hinderaker has more on it at Power Line, calling it “explosive” if true. Both John and Vox link to an archived version of Alexander’s interview, which contains this allegation of violence

The caller's name has been redacted in the report, but according to records searches Amy Alexander, who spoke out in 2006 about her relationship with Ellison, lived at this address in 2005.

Ed then cites the archived interview, noting a 911 call that partially corroborates her story. She has been mum on the matter ever since, however. In this case, both Alexander and Ellison, who also denied the allegations, requested restraining orders. The judge granted Ellison’s and denied Alexander’s. We don’t know why.

The DNC has finally suspended him pending a review of these allegations.