CNN's Acosta: I Felt Like I Wasn't In America Anymore Because Trump Supporters Heckled Me 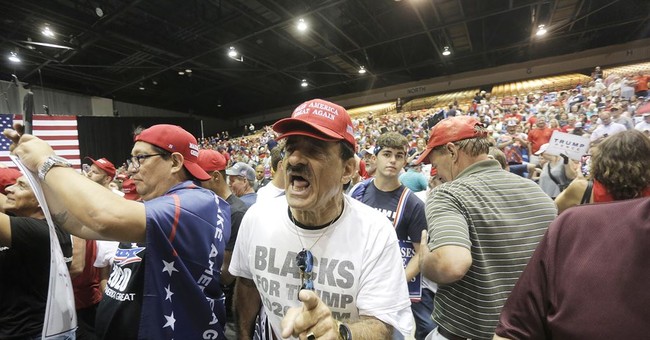 Oh, poor Jim Acosta is still licking his wounds from his public floggingat President Trump’s rally in Tampa on Tuesday. Supporters of the president shouted “CNN sucks” during the CNN’s reporter’s television hit, leading to yet another whine tour from the liberal media about how it’s unfair to criticize them.

Just a sample of the sad scene we faced at the Trump rally in Tampa. I’m very worried that the hostility whipped up by Trump and some in conservative media will result in somebody getting hurt. We should not treat our fellow Americans this way. The press is not the enemy. pic.twitter.com/IhSRw5Ui3R

“Just a sample of the sad scene we faced at the Trump rally in Tampa. I’m very worried that the hostility whipped up by Trump and some in conservative media will result in somebody getting hurt. We should not treat our fellow Americans this way. The press is not the enemy,” tweeted Acosta before the rally. He later told CNN colleague S.E. Cupp that he didn’t feel like he was in America anymore (via Raw Story):

On Wednesday, Acosta sat down with HLN’s S.E. Cupp to talk about what he took away from the experience.

“Honestly, it felt like we weren’t in America anymore,” he said. “I don’t know how to put it any more plainly than that. Americans should not be treating their fellow Americans in this way.”

“He is whipping these crowds up into a frenzy to the point where they really want to come after us,” Acosta said.

He continued: “My sense of it is that these opinions these folks have at these rallies, they’re shaped by what they see in the primetime hours of Fox News and what they hear from some conservative news outlets that just sort of give them this daily diet of what they consider to be terrible things we do over here at CNN.”

Are you freaking kidding me, man? Grow up—Trump supporters don’t like you and Hillary supporters hate Fox News. Welcome to the party, pal, or in the words or Livia Soprano, “oh, poor you.” Acosta was not in danger. This wasn’t Beirut in the 1980s. It wasn’t Sarajevo in the 1990s. What occurred was no different than what happens to opposing fans at the Lincoln Financial Field when the Philadelphia Eagles play. Also, you stayed, Jim—so obviously it wasn’t like Fallujah.

Conservatives throwing it right back at the liberal news media. That’s as American as apple pie. Deal with it, CNN. You’re going to be a punching bag for the foreseeable future.  We’re not taking it anymore.  And yes, you do indeed suck. And yes, you’re anti-Trump bias has landedyou in some hot water.

“Not in America anymore”… that’s another thing: you guys overreach all the time.

UPDATE: After today’s press briefing, Acosta continues to whine, saying journalists should stand outside the White House and chant, “we’re not the enemy of the people” (via Free Beacon):

I walked out of the end of that briefing because I am totally saddened by what just happened. Sarah Sanders was repeatedly given a chance to say the press is not the enemy and she wouldn't do it. Shameful.

"Sadly, Brooke, I think what you saw happen here at the end of that briefing was the true feelings of the president, the true feelings of many of the people that work in this administration laid bare," Acosta said. "They believe … that the journalists who cover this White House, the journalists who work in this city, who were just trying a few moments ago to hold some of these officials accountable about attacks on our democracy, that the people here who work at this White House all the way up to the president evidently believe that journalists are the enemy of the people. Literally, the enemy of the people."

Acosta said he gave Sanders "several opportunities to set the record straight," and she refused. Sanders noted she receives Secret Service protection because of threats she has received, and while he sympathized, Acosta said she and Trump continued to regularly tell lies and needed to be fact-checked.