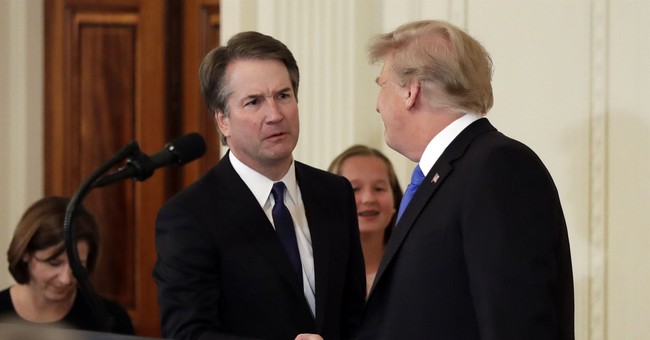 Well, it seems the liberal media has just plain given up on the red state Democrats, whose heads have been placed in a vice thanks to the Supreme Court fight. Sens. Heidi Heitkamp (D-ND), Joe Donnelly (D-IN), Joe Manchin (D-WV), Jon Tester (D-MT) and Claire McCaskill (D-MO)—all from states Trump won handily—are facing a make it or break it vote. Yet, most find this a no-win situation. They could vote for President Trump’s SCOTUS nominee, Judge Brett Kavanaugh, but get nothing from it. GOP voters won’t be brought into the fold, and Democrats would be left irked and confused over a vote that would give conservatives a solid majority on the court for the next generation or so. It would also starve them for funding from the national party, as these red state Democrats would be declared persona non grata. There really is not good way out of this if you’re among this group—and some liberal media outlets are pretty much saying that.

The New Yorker wrote, citing Democratic polls, that all would be fine if these red state Democrats voted against the nomination. Of course, the progressive polls would say that, and yes, the piece cites Democratic operatives who note how those who voted for Clarence Thomas in 1992—paid a price for it. Now, it’s not an argument that’s totally off its rocker. On health care, abortion, and possibly the Mueller Investigation, these are reasons for Democrats to stick together, though it wouldn’t be enough to kill Kavanaugh’s nomination, which is another point made for why red state Democrats should just say screw it and vote (via New Yorker):

Nan Aron, the president of Alliance for Justice, a progressive group, who was also involved in the Thomas confirmation fight, agrees. “The conventional wisdom is that a vote against the nominee will hurt Democrats, but the reality that we’ve seen in the past is that it’s sometimes the right vote for Democrats politically. Votes for Thomas deflated the Democratic vote” afterward in some Senate races. As for this year, she says, “Look—Democrats in red states need the progressive base. You don’t need them staying home.”

On Saturday, two progressive groups—Demand Justice, a new organization focussed on judicial issues, and the Center for American Progress—planned to release a poll, conducted in the battleground states of Indiana, Missouri, North Dakota, and West Virginia, that seeks to convey a similar message to vulnerable Democratic senators.

According to the poll, conducted by Hart Research Associates, Democratic senators may actually be better off politically, even in states that went overwhelmingly to Trump in 2016, if they cast votes against Kavanaugh. The polling data, which was gathered between June 30th and July 5th from about twelve hundred voters in those four states, are, of course, self-serving. But it makes the case that, if Democratic senators in conservative states frame their opposition to Kavanaugh clearly as a matter of conscience, based on one of three possible arguments, a majority of voters will likely accept and support the decision.

In Indiana, where Donnelly, a conservative Democrat in an even more conservative state, is very much in the undecided camp on Kavanaugh, Kip Tew, the former state Democratic Party chairman who is now a lobbyist, told me that, contrary to what most people think, “I think he’s got an easy vote to make.” He argued that conservatives were already against Donnelly, so he’d never win their votes anyway, and the centrist votes he needs won’t be affected by the Supreme Court fight. “The middle doesn’t care about this vote—they care about their paychecks and jobs,” he told me. “Most people can’t even name all nine Justices!”

And there’s some good ole’ Democratic condescension, calling the American voter dumb because your side lost. Also, he’s wrong. It’s very possible that Mitch McConnell blocking Merrick Garland gave skeptical GOPers ample reason to vote for Trump in 2016. Twenty-one percent of the electorate said that SCOTUS appointments was the most important factor in their vote, 56 percent broke for Trump. The fact that McConnell wants to confirm Kavanaugh within 70 days, with a final confirmation vote in early October is not an accident.

New York Magazine offered their own reasons for red state Democrats to oppose the nomination, the first two being that Kavanaugh is unpopular, and that the policies he supports are also unpopular. He’s not a politician. Who cares about his approval ratings? In fact, when polling is unveiled on SCOTUS, I shrug. It’s an institution that’s impervious to polling. It’s irrelevant. These are lifetime appointments and legal decisions shouldn’t be made based on polling. That’s nonsense, though a hallmark of American liberalism when it suits them. Oh, and they list Merrick Garland and “it’s the right thing to do” as reasons too:

You may recall (if you haven’t blocked it from your memory in an effort not to give in to insanity) that two years ago, Senate Republicans, led by McConnell, blocked President Obama’s eminently qualified Supreme Court nominee Merrick Garland from even receiving a hearing after Antonin Scalia’s death — with the bogus justification that different rules apply during presidential election years. The shameful episode is a salient illustration of just how little political effect Democratic resistance to voting for Kavanaugh is likely to have. In 2016, Democrats tried (though probably not in the most effective way) to make their unfairly spurned Supreme Court nominee into a major campaign issue. It did not work.

It’s true that in recent decades, the right has paid far closer attention than the left to matters of the judiciary; President Trump’s pre-election list of potential Supreme Court nominees was a major reason some conservatives took a flyer on him. But the people for whom Brett Kavanaugh’s place on the Supreme Court takes priority over all other electoral issues are unlikely to vote for Democrats in the first place. Red state Dems will be safe focusing on larger slices of the electorate whose mind is on other matters, like health care, jobs, or even immigration.

The Garland episode also supplies another easy justification for Democrats to say no.

But beyond the midterm calculations, there are moral ones.

Brett Kavanaugh may be well-liked by seemingly everyone he has come into contact with, from his law-school students to fellow Washington carpool dads. But make no mistake: On matters of abortion, labor unions, concentration of corporate power, the environment, and so many other issues that are near and dear to (even red state) Democrats’ hearts, he is a radical — and one who is likely to wield extraordinary power to codify once-unrealistic conservative priorities into law. He poses a clear and present danger to the values Democrats hold dear.

Voting for him may blow up in red state Democrats’ faces politically. But it would also, clearly, be the wrong decision for America.

Again, we’ve been down this road. We’re right on the Biden Rule. The Democrats are wrong. Period. Justices Samuel Alito and Elena Kagan were confirmed during midterm years. The Biden Rule also has historical basis. It’s in the congressional record. No Supreme Court hearings during a presidential election year. It’s sour grapes because liberals were oozing with confidence that Hillary Clinton would win the 2016 race. Reality punched them in the mouth. So, from what I gather here is that fellow liberals are telling red state Democrats, you’re screwed. Just vote no and leave open the possibility that the GOP could increase their Senate majority. If Sens. Susan Collins (R-ME) and Lisa Murkowski (R-AK), the moderate wing of the Senate Republican caucus, give their stamp of approval, and it seems that they have, then this game is over.

Also, there is also polling showing that some red state Democrats would fare well by voting for Kavanaugh. Manchin would actually bury his Republican opponent by nearly 30 points if he votes for Kavanaugh; 59 percent of West Virginians want Kavanaugh confirmed. In fact, solid majorities (55+ percent or more) in North Dakota, Indiana, West Virginia, Florida, and Missouri want Brett Kavanaugh on the Supreme Court. Talk about a rock and a hard place.

Update: Guy will have more on this tomorrow, but here is another poll showing that a majority of voters represented by these red state Democrats want Kavanaugh confirmed. Poll included Alabama’s Sen. Doug Jones (D-AL), though he’s not running for re-election this year (via Free Beacon):

The poll, administered by North Star Opinion Research on behalf of the Judicial Crisis Network, surveyed voters in Alabama, Indiana, North Dakota, and West Virginia, all states with incumbent Democratic senators which also voted for President Donald Trump in the 2016 election. Three of those Senators—Joe Donnelly (Ind.), Heidi Heitkamp (N.D.), and Joe Manchin (W. Va.) are up for reelection in November.

According to North Star's poll, significant majorities of voters in all four states want to see Kavanaugh confirmed. In North Dakota, 60 percent of voters support confirmation while only 22 percent oppose it; West Virginia is 55 to 30, Alabama 54 to 30, and Indiana 52 to 34.

Support for Kavanaugh is even stronger among self-identified independents. 60 percent of independents support confirmation in North Dakota, versus 18 percent opposing; 59 support and 23 oppose in West Virginia; 54 to 30 in Alabama; and 48 to 34 in Indiana.