Is This Nightmare Over? House Immigration Bill Goes Down In Flames 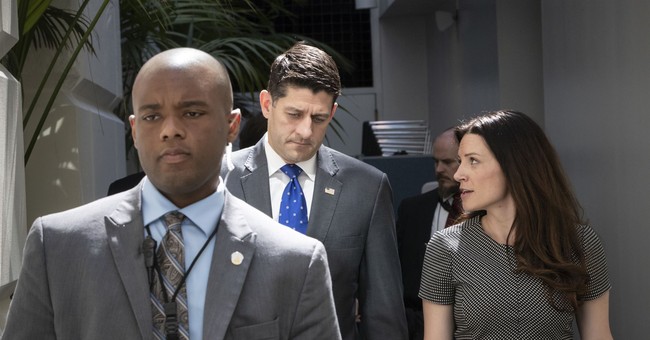 Well, the whole process was a dumpster fire. Everyone braced for defeat. And now the legislative ship on immigration has finally crashed into the iceberg. There are no survivors. The compromise bill crafted by the House leadership and loaded with goodies to appease both sides for votes utterly failed, going down 121-301 in the House. This bill would have granted a six-year deportation shield to 1.8 million illegal aliens, including DACA recipients. On the sixth year, an avenue to green cards and a pathway to citizenship would have opened up. It was not what hardline immigration enforcement conservatives wanted, even the more conservative Goodlatte bill, which was rejected last week, was seen as too soft for some (via NBC News):

Lawmakers overwhelmingly rejected the bill in a 121-301 vote, falling short of the roughly 218 votes needed to pass. No Democrats voted in favor of the bill.

This came just hours after Trump reversed course and urged House Republicans to back the legislation after telling them last week not to bother with it.

Some Republican lawmakers had recently expressed concern that Trump had not weighed in on the legislation and said that its prospects for passage were uncertain without clear signs of support of the White House.

It was the first time that Trump publicly offered support for the legislation after telling House Republicans behind closed doors last week that he supported their immigration strategy "1000 percent" but not explicitly backing this measure.

This measure was taken up because of a discharge petition that was heavily backed by Democrats. Twenty-three moderate Republicans joined them. They were three votes shy of the 218-signatory mark that would have allowed immigration votes without going through the House leadership. Alas, this deal to hold a vote for these two bills. It was a nightmare. It divided the party at a time when we don’t need this drama. There’s now a debate on the Hill whether to focus on family separations on the border. The Senate is debating that, but they’re stuck in the mud on that as well. The Democrats don’t want to solve this problem. They want to use it for the midterms. It’s that simple—and they know immigration splits the GOP. So, around and around we go with this game.