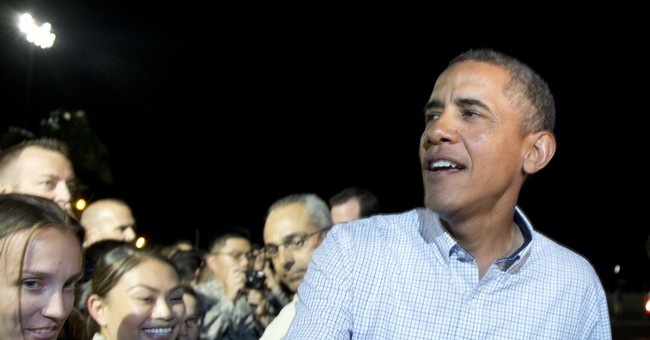 Obama to migrants from Latin America in 2014: "Do not send your children to the borders. If they do make it, they'll get sent back." pic.twitter.com/lDRT36KKdi

President Barack Obama separated parents from their children at the border.

Obama prosecuted mothers for coming to the United States illegally. He fast tracked deportations. And yes, he housed unaccompanied children in tent cities.

For much of the country — and President Donald Trump — the prevailing belief is that Obama was the president who went easier on immigrants.

Neither Obama nor Democrats created Trump's zero-tolerance policy, which calls for every illegal border crosser to be prosecuted and leads to their children being detained in separate facilities before being shipped to a shelter and eventually a sponsor family.

But Obama's policy helped create the road map of enforcement that Trump has been following — and building on.

Obama took several actions that led to an outcry of fear and distrust, though his actions failed to get the attention the Trump administration has.

The White House declined to comment on specific actions of previous presidents. But a DHS official said it’s frustrating to be blamed for conditions at facilities that predate Trump and for creating new policies that were already in action.

“We’re enforcing the rule of the law,” said the DHS official, who is not authorized to speak publicly. “This is something that the previous administration didn’t do. ... The decades of ignoring this is what has led to today’s crisis.”

No numbers on children separated from their parents under Obama is available because the Obama administration didn’t keep them, according to Trump DHS officials.

*during the Obama administration https://t.co/azrClHG2l5

*Lived. In 2016. Under Obama. Every single fact alleged in the lawsuit on which this AP article is based occurred before Trump became president. https://t.co/RV4aCI9Fsi

That's the number of paragraphs you have to read into this story before being informed this was the Obama-era (2015-2016).

That's the number of times Trump is mentioned.

That's the number of times Obama is mentioned. https://t.co/B4L7ArBEjk

Here is the document that Barack Obama's administration filed for those centers: pic.twitter.com/YtobAQD3DI

While the brave journalists were hibernating during the Obama era, some bad things happened.

The journos are now awake, blaming Trump, and want to be taken seriously. Bang up work, @justinjm1! pic.twitter.com/F83B0RwHl7

This 2017 report comprehensively details widespread use of family separation as a matter of policy pre-Trump. While Trump has added his own variant, it's willful ignorance to pretend that this was not a regular feature of US immigration policy before https://t.co/PgLdC7iyGi pic.twitter.com/HEU1qVl4PF

On top of this, we had another act of mass hysteria from the media over allegations of abuse at a detention facility in Virginia. It should be noted that a) the allegations have not been proven; and b) this occurred under Obama, but it was buried some 20 paragraphs in the Associated Press piece. From the Daily Beast to MSNBC (no shocker there), it was a time to bash the Trump administration, only to eat a face full of buckshot. To make the hypocrisy even more painful, here’s Sen. Tammy Baldwin’s (D-WI) painful answer on whether she voiced outrage over these child separations under Obama. She didn’t answer the question because she didn’t raise any objections. None like what we’re seeing from the Left right now. That’s for sure.

It’s amnesia. And this epic failure is the reason why the media’s trust is being tested. Now, does this make Obama Mr. tough guy on immigration? No. Of course not, as the man enacted a constitutionally questionable program that shielded hundreds of thousands of illegal aliens from deportation, which we now know as the Deferred Action for Childhood Arrivals program. Should there be a fix? Yes. We’re past that point now. In principle, these people should go, but both sides have agreed on protections. The fight within the GOP is how far will that go. Will it be renewable protective status or that plus a pathway to citizenship? The latter is unacceptable, but this debate is moot since both immigration bills slated for votes today looked like they’ll both go down in flames.

UPDATE: The more conservative Goodlatte bill on immigration failed. The compromise bill vote has been delayed until tomorrow, but it'll likely fail as well.

Also, let's not forget that the press is also bothcing these kids in dog kennels. That's not the case, even The Washington Post visited a facility housing these migrant kids. There were no dog kennels. In fact, one of the viral photos showing kids in such conditions wasn't even real. They were staged, all part of a protest against the Trump administration's immigration policy.