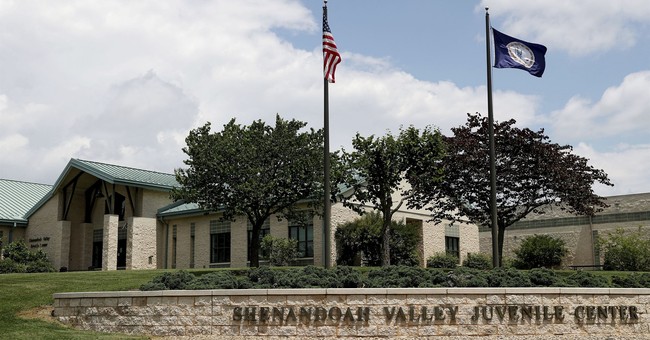 Immigrant children allege years of abuse while they were housed at Shenandoah Valley Juvenile Center near Staunton, Virginia in a new complaint filed by the nonprofit Washington Lawyers’ Committee for Civil Rights and Urban Affairs. Guards stripped them, strapped them to chairs with bags over their heads, placed them in solitary confinement, and worse in 2015 and 2016, they claim.

“Whenever they used to restrain me and put me in the chair, they would handcuff me,” said a Honduran immigrant who was sent to the facility when he was 15 years old. “Strapped me down all the way, from your feet all the way to your chest, you couldn’t really move. ... They have total control over you. They also put a bag over your head. It has little holes; you can see through it. But you feel suffocated with the bag on.”

Since 2007, about half of the 58 beds have been occupied by immigrants between the ages of 12 and 17 facing deportation proceedings or awaiting rulings on asylum claims, the AP explains. Lawyers for the detention facility deny the abuse allegations.

Although the physical violence allegedly occurred in 2015 and 2016, the Associated Press did not mention the Obama administration in their report. But, as some social media users noted, the editors did have plenty to say about President Trump.

This screen cap is going to be a critical cut and paste for all the folks blaming Trump for the AP story about torturing kids at the Shenandoah Valley Juvenile Center.

Buried in the 10th paragraph... this all happened under Obama. pic.twitter.com/W6shsyl6rF

This week, an immigration lawyer recalled warning Obama to fix detention centers because they may one day be a stain on his legacy.

On Wednesday, Trump took executive action to keep illegal immigrant families together at the border after receiving criticism for his zero tolerance policy.