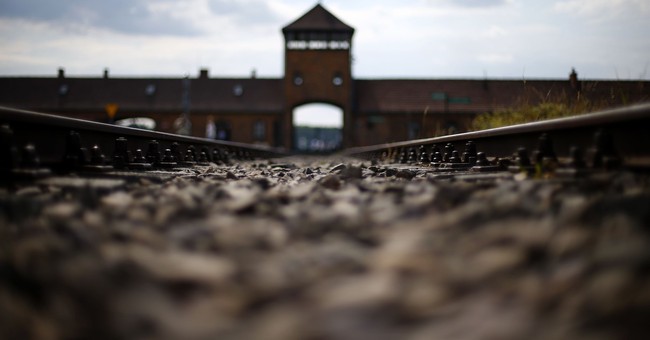 So, we’re all Nazis…again. Remember, in June of 2017, the National Rifle Association’s Dana Loesch blasted politically motivated violence. That August, white nationalists and left-wing Antifa activists brawled in the streets of Charlottesville, Virginia. Apparently, it was the fault of American conservatives, who the Left labeled Nazis. We’re one and the same apparently. Well, we’re back at this nonsense, with those who support border security and immigration enforcement being no better than the SS, Reich Main Security Office, SD, RSD, or any other state security apparatus of the former Nazi regime.

The issue of child separation at the border has dominated the news cycle. For six days in June, the big three—ABC, NBC, and CBS—devoted hours of coverage of crying kids being separated front their families because their parents tried to break the law by coming into this country illegally. From June 13-18, the networks devoted nearly three hours of this, drumming up a narrative, and resulting in the current hysteria that these kids are being locked up into death camps. They’re not. The Washington Postreported on one facility, Casa Padre, in Texas that’s housing over 1,500 immigrant children. The food may not be good, but those housed there admit that it’s nice to get three meals a day, regardless (via WaPo):

Texas-based Southwest Key has grown quickly in recent years, fueled by surges of young Central Americans seeking refuge north, an expansion that has helped push annual compensation for the nonprofit’s chief executive, Juan Sanchez, to nearly $1.5 million, filings with the Internal Revenue Service show. The organization now houses 5,129 immigrant children in three states — approaching half the approximately 11,400 currently in federal custody — in facilities that are being strained to capacity, according to Sanchez.

Each day, the federal government sends Casa Padre a list of children detained at the border to be placed in the shelter, said Jaime Garcia, program director for Southwest Key. They arrive in white vans, half a dozen at a time. After they are fed, clothed and get showered, the boys spend up to 72 hours in “intake” as they are vaccinated and checked for tuberculosis, sexually transmitted diseases and other maladies.

Once they are medically cleared, they join the throng of boys in the shelter, where they stay for an average of 49 days, according to Southwest Key officials. The number of children at Casa Padre is constantly rising — on Wednesday it was 1,469.

Yellow lines on the ground mark the area boys must line up. In the cafeteria, a mural tells kids to speak quietly, ask before getting up and not share food. Next to their beds are lists of each boy’s belongings: two T-shirts, three pairs of socks, three pairs of underwear, one polo, a pair of jeans. Lights go out at 9 p.m. and come back on at 6 a.m.

There are so many children that they attend school in two shifts: one in the morning, the other in the afternoon. They sit in small, numbered classrooms with yellow walls covered in posters of planets. On Wednesday [June 13], through tiny windows, they waved to the reporters outside.

Jairom, 17, had fled an abusive home in Honduras and traveled through Mexico for a month, mostly by train, before he was detained crossing the Rio Grande. His family asked that only his first name be used.

Casa Padre wasn’t perfect, he said. The two dirt soccer fields behind the big-box store weren’t enough space for all the boys who wanted to play. And he said the food was terrible.

“They gave us a bit of bread, a nasty egg and some beans and an apple and some milk,” he said, describing breakfast. “Everyone complained about the food.”

But after a month sleeping in the open and surviving on coconuts, it was a relief to have three meals a day and a mattress of his own.

Yeah, this is totally like Nazi Germany, right? Are we insane? No, is the Left insane? Yes, and their allies in the media have only fanned the flames. Oh, and let’s not forget former NSA and CIA Director Michael Hayden tweeting a picture of Auschwitz to voice his opposition to the policy.

Other governments have separated mothers and children pic.twitter.com/tvlBkGjT0h

“Other governments have separated mothers and children, “ he said (via NewsBusters):

The Holocaust was invoked 12 times across CNN and MSNBC between June 15 and the 18th, generally in the form of comparisons between DHS detention centers and Nazi concentration camps. There were also six mentions of Japanese-American internment camps, as well as four comparisons to slavery.

On Friday, MSNBC’s Joe Scarborough opened Morning Joe with a tasteless Holocaust reference. “Children are being marched away to showers,” he intoned, “just like the Nazis said they were taking people to the showers, and then they never came back. You’d think they would use another trick.”

Over the weekend, CNN political commentator Dave Jacobson threw a miniature tantrum over the policy. On Saturday’s CNN Newsroom during the 10 a.m. hour, he opined, “Donald Trump increasingly looks like Hitler in Nazi Germany.” The following day, he appeared again on Newsroom in the afternoon to embellish on his already hysterical take:  “Increasingly, Donald Trump is turning this nation into Nazi Germany and turning these [detention centers] into concentration camps.”

While cooler heads in the media condemned this comparison, Hayden later defended those statements during two CNN appearances on Monday. “Now look, I know we’re not Nazi Germany,” he said on New Day, “but there is a commonality there.”

He repeated that point on The Situation Room that same day: “I knew it would be controversial, but I felt a warning flare was necessary.” Hayden’s tweet was also featured on five different MSNBC shows on Monday, with hosts such as Nicolle Wallace of Deadline: White House and Stephanie Ruhle of MSNBC Live appearing reluctant even to criticize the comparison. “We don’t want to go too far, but is this warning valid?” Ruhle pondered anxiously on her 9 a.m. show.

Something you won't hear much about: 52 percent of Border Patrol agents are Hispanic. But sure, continue your Nazi narrative.

So, if it we’re not like Nazi Germany, then shut the hell up. And this also isn’t like Japanese interment. We were at war. The Pacific fleet had been blown out of the water at Pearl Harbor, and we were—at the time—under threat of invasion. But I’m not going into whether this was right or not. In retrospect, it probably wasn’t, but the Supreme Court never ruled that Japanese internment was unconstitutional, nor have they overturned that race-based curfews, which were also enacted into his period, as an unconstitutional policy if the U.S. found itself at war with a nation of that specific racial group. We were at war, folks. War powers are quite extensive. But this isn’t a wartime situation. This isn’t like Japanese internment. What’s happening on the border is the result of decades of inaction by both parties on how to reform and revise our immigration policy. Politico has a nice piece on the process. Are there areas that need improving? Sure. But we’re not Nazi Germany and this isn’t Japanese internment—and anyone who thinks otherwise is someone who you shouldn’t waste your time with. It’s Trump Derangement Syndrome—pure and simple. It’s shocking that supporting our men and women in law enforcement, enforcing immigration laws, and deporting people who shouldn’t be here is now the new criteria for what makes one a Nazi in the Left’s book. Then again, that book could turn into a multivolume study in mental illness.

Last Note: No, Soledad O'Brien. No, we're not and we never will become Nazi Germany

Welp, I guess we've put to rest the question: "Nazi Germany: Could it happen here in America?"