WSJ Columnist: Hey, The ‘No Bias’ Claim In DOJ IG Report Is Not What It Seems 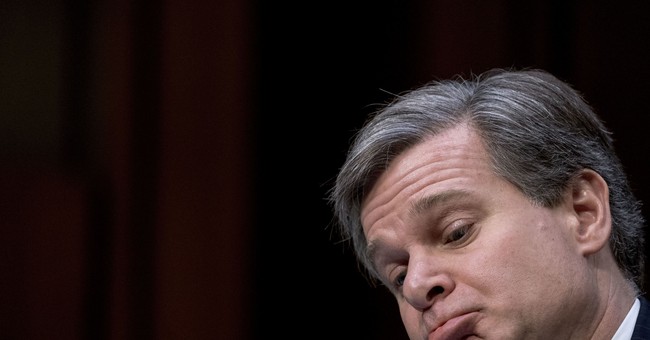 For the Left and their allies in the media, yeah—yesterday Department of Justice Inspector General Michael Horwitz released the long-awaited report on how the FBI/DOJ handled the Clinton email probe. It found that James Comey’s actions were extraordinary and insubordinate, deviating way outside department policy. One could point to his July 5 presser in which he announced no charges would be filed against Mrs. Clinton. That was not his place, though he did indict the Clinton team for terrible judgment when it comes to handling sensitive documents. The reasons for re-opening the probe in October 28, which earned him scorn with Democrats, was later determined to be unpersuasive. It was another way to the Left to torch Comey.  So, what about those allegations of bias that engulfed the FBI? Concerning this email investigation, no evidence was found to determine that it impacted in the investigation in the sense of generating pre-determined outcomes. Yet, that does not mean there wasn’t any bias. It’s worded very carefully and The Wall Street Journal’sKimberley Strassel went on an extended thread on social media to explain.

“He [referring to IG Horwitz] very carefully says that he found no ‘documentary’ evidence that bias produced ‘specific investigatory decisions.’ That's different,” she said. “It means he didn't catch anyone doing anything so dumb as writing down that they took a specific step to aid a candidate. You know, like: ‘Let's give out this Combetta immunity deal so nothing comes out that will derail Hillary for President.”

Strassel elaborates further in her column about the report:

There’s Loretta Lynch, who felt it perfectly fine to have a long catch-up with her friend Bill Clinton on a Phoenix tarmac and whom the inspector general slams for an “error in judgment.” Mr. Comey’s entire staff was complicit in concealing the contents of the July press conference from Justice officials. We discover that significant FBI “resources” were dedicated in October to spinning FBI “talking points” about the Clinton investigation—rather than actually investigating the new Anthony Weiner laptop emails the bureau discovered in September.

There’s former Assistant Attorney General Peter Kadzik, who was tipping off the Clinton campaign even as he took part in the investigation, and who “failed to strictly adhere to [his] recusal” when he finally stepped away. Former FBI Deputy Director Andrew McCabe also did not “fully comply with his recusal,” and he’d already been found to have lied to the bureau about a leak to the media. Speaking of leaks, Mr. Horowitz needed full attachments and charts to list the entire “volume of communication” between FBI employees and the press.

…the bias is everywhere. It’s in the texts between Peter Strzok and Lisa Page, and those of three other employees who are routinely “hostile” to Candidate Trump…It’s in a message from an unnamed agent in November 2016 who writes that although the FBI found Clinton aide Huma Abedin had “lied,” it doesn’t matter since “no one at DOJ is going to prosecute.” To which a second agent replies. “Rog—noone is going to pros[ecute] even if we find unique classified.”

It’s in the Justice Department’s decision to cut deals with Mrs. Clinton and her staff and shelter them from a grand jury. And to agree to limitations in searching for and in devices. And in immunity agreements.

No bias? Please. There was bias, unless you’re with the liberal news media who thinks the only thing that was bad from this report is that Donald Trump is still the president of the United States.

2) It means he didn't catch anyone doing anything so dumb as writing down that they took a specific step to aid a candidate. You know, like: "Let's give out this Combetta immunity deal so nothing comes out that will derail Hillary for President." #IGReport

3) But he in fact finds bias everywhere. The examples are shocking and concerning, and he devotes entire sections to them. And he very specifically says in the summary that they "cast a cloud" on the entire "investigation's credibility." That's pretty damning. #IGReport

4) Meanwhile this same cast of characters who the IG has now found to have made a hash of the Clinton investigation and who demonstrate such bias, seamlessly moved to the Trump investigation. And we're supposed to think they got that one right? #IGReport

5) Also don't believe anyone who says this is just about Comey and his instances of insubordination. (Though they are bad enough.) This is an indictment broadly of an FBI culture that believes itself above the rules it imposes on others. #IGReport

7)It also contains stunning examples of incompetence. Comey explains that he wasn't aware the Weiner laptop was big deal because he didn't know Weiner was married to Abedin? Then they sit on it a month, either cuz it fell through cracks (wow) or were more obsessed w/Trump

8) And I can still hear the echo of the howls from when Trump fired Comey. Still waiting to hear the apologies now that this report has backstopped the Rosenstein memo and the obvious grounds for dismissal.

Combetta refers to Mr. Paul Combetta, a computer specialist who deleted Hillary Clintons emails, which were under a congressional subpoena (via NYT):

A computer specialist who deleted Hillary Clinton’s emails despite orders from Congress to preserve them was given immunity by the Justice Department during its investigation into her personal email account, according to a law enforcement official and others briefed on the investigation.

Mr. Combetta is one of at least two people who were given immunity by the Justice Department as part of the investigation. The other was Bryan Pagliano, a former campaign staff member for Mrs. Clinton’s 2008 presidential campaign, who was granted immunity in exchange for answering questions about how he set up a server in Mrs. Clinton’s home in Chappaqua, N.Y., around the time she became secretary of state in 2009.

According to the F.B.I. documents, Mr. Combetta told the bureau in February that he did not recall deleting the emails. But in May, he told a different story.

In the days after Mrs. Clinton’s staffers called Platte River Networks in March 2015, Mr. Combetta said realized that he had not followed a December 2014 order from Mrs. Clinton’s lawyers to have the emails deleted. Mr. Combetta then used a program called BleachBit to delete the messages, the bureau said.

In Mr. Combetta’s first interview with the F.B.I. in February, he said he did not recall seeing the preservation order from the Benghazi committee, which Mrs. Clinton’s lawyer, Cheryl D. Mills, had sent to Platte River. But in his May interview, he said that at the time he made the deletions “he was aware of the existence of the preservation request and the fact that it meant he should not disturb Clinton’s email data” on the Platte River server.

Strassel added that the IG report, in her view, shows a culture that feels the rules do not apply them, noting the failed recusals (cough…McCabe…cough), the Lynch/Bill meeting on the tarmac in Phoenix, and reporters giving free goodies to staffers. Talk about a situation that lends itself to having more leaks than the Iraqi Navy. But hey, the Clintons could empathize; they’ve felt the same way for years.

And let’s not forget the atrocious exchange between FBI employees, who had a total meltdown over Trump’s 2016 win.

“You promised me this wouldn’t happen. YOU PROMISED,” one said, identified as “FBI Employee.”

“Trump’s supporters are all poor to middle class, uneducated, lazy POS that think he will magically grant them jobs for doing nothing. They probably didn’t watch the debates, aren’t fully educated on his policies, and are stupidly wrapped up in his unmerited enthusiasm,” said a lawyer with the bureau.

With these examples, it’s hard to fully accept there was no bias as a legitimate point to sell to the American people. Actually, the people did watchthe debates, and the way you know these jokers at the FBI didn’t is because they should have known that Clinton-leaning voters were more receptive to Trump’s language on the economy in the third debate.

Still, this did not impact the execution of the probe itself into the emails. I’m not so sure that’s going to sit well. Yet, we can probably put the obstruction of justice charge to bed for good, not that it was a serious charge to begin with, as the president has the right to fire the FBI director whenever he wants. But this IG report shows President Trump had cause.