2018 Elections: Pollster Says GOP Has To Do These Two Things To Win Over Voters For The Midterms 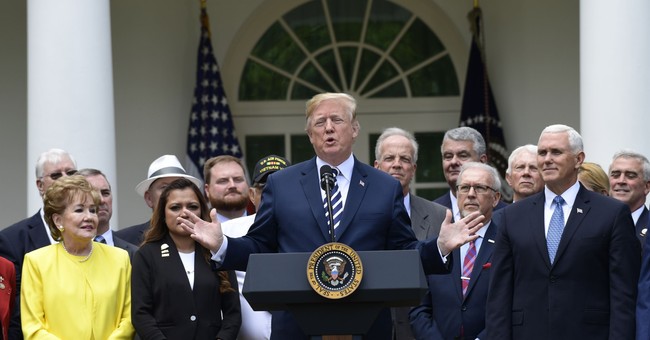 The economy is booming. We have over 200,000 jobs created in May. Consumer confidence is at high record highs. Small business confidence numbers are in the same ballpark. Three million jobs have been created, while over three million workers have received bonus checks averaging $1,000, some companies have doled out $3,000. Thanks to the tax reform package, we have a better job-creating and investing climate. The Democrats universally opposed this bill. In doing so, they opposed tax relief to middle and working class families. They’ve done nothing but obstruct because that’s what their psycho base wants to happen. So, they have a record of nothing.

The pervasive good economic news is beginning to become something that is unavailable for Democrats to escape when it comes to their attacks on the president. It’s quite a coup. The bill that the Left thought would be an albatross around the GOP’s neck ended up generating a booming economy, and the obstruction is now undercutting Democratic attacks against the president.

The generic ballot advantage Democrats had over Republicans has shrunk to singe-digits. The June 5 primaries saw Democrats avoid disaster in California by avoiding lockouts in the several races they’re targeting for 2018. California’s jungle primary advances the two top vote getters to the general in November, regardless of party. Yet, in those several districts targeted by Democrats, the GOP garnered over 50 percent of the vote.

With the economy to our backs, and experts saying that the second quarter could yield 3.6-4.8 percent growth, the blue tsunami that liberals have been awaiting might not come at all in the face of an “unstoppable” Trump economy.

1. The economy is at record highs.
2. Unemployment is at record lows.
3. @NancyPelosi is the least popular politician in the country.

The #BlueWave could end up bigly disappointed in 2018… https://t.co/cNKeadVv41

As @NancyPelosi clings to power of the Democratic Party, younger generations of @TheDemocrats are shut out from moving their party forward.

If the @GOP can keep their party together for 6 more months, they will keep their House majority. https://t.co/OTunAcqAyf

Last night, pollster Frank Luntz was on Laura Ingraham’s show, where he said the GOP has to do two things that could seal the deal for them for 2018. Rep. Nancy Pelosi (D-CA) is widely unpopular. So, hold a vote for speaker before the election to get the Democrats on the record backing Pelosi, who thinks the murderous thugs of MS-13 aren’t so bad. She also said the strong jobs numbers are, uh, pretty much meaningless. That’s Democrat speak for ‘this wasn’t how this year was supposed to go and I’m just going to deny reality that my party and its positions are total crap.’

The other thing Luntz said GOP has to do is pass another piece of legislation, like a job requirement for food stamps.

.@FrankLuntz: "The Democrats can not point to anything that they have actually done. All they've got is obstruction." @IngrahamAngle pic.twitter.com/mK93A74Xfp

Unemployment is at an 18-year low. Black unemployment hit historic lows. The Department of Labor also noted, “For the first time on record, the number of American job openings exceeds the number of job seekers.”

The Democrats would destroy all of this. Frankly, new pieces of legislation are good, but the economic news is spreading. And if the Democrats keep defending the indefensible, like saying MS-13 might not be entirely evil, 2018 could be an easier climb than we anticipated.