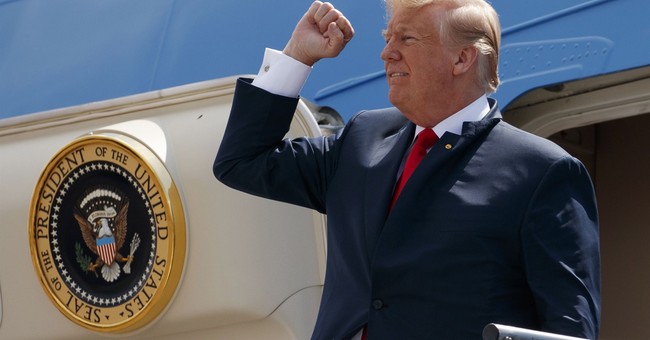 The Democrats said it couldn’t be done. Former President Obama said it takes more than waving a magic wand when it comes to job creation, which is rich because he was no wizard at job creation. With President Trump, jobs are being created. So many jobs—you won’t believe how many jobs. Three million since he was elected. Now, with a solid May jobs report—223,000 jobs created—behind him, the experts are coming around to the conclusion that the Trump economy is not just robust, but “unstoppable. Second quarter growth is projected to be anywhere between 3.6 and 4.8 percent. Put that in your pipe and smoke it (via CNBC):

In the face of persistent fears that the world could be facing a trade war and a synchronized slowdown, the U.S. economy enters June with a good deal of momentum.

Friday's data provided convincing evidence that domestic growth remains intact even if other developed economies are slowing. A better-than-expected nonfarm payrolls report coupled with a convincing uptick in manufacturing and construction activity showed that the second half approaches with a tail wind blowing.

"The fundamentals all look very solid right now," said Gus Faucher, chief economist at PNC. "You've got job growth and wage gains that are supporting consumer spending, and tax cuts as well. There's a little bit of a drag from higher energy prices, but the positives far outweigh that. Business incentives are in good shape."

The day started off with the payrolls report showing a gain of 223,000 in May, well above market expectations of 188,000, and the unemployment rate hitting an 18-year low of 3.8 percent.

Then, the ISM manufacturing index registered a 58.7 reading — representing the percentage of businesses that report expanding conditions — that also topped Wall Street estimates. Finally, the construction spending report showed a monthly gain of 1.8 percent, a full point higher than expectations.

Already, the Atlanta Fed's GDPNow tracker sees the second quarter rising by 4.8 percent. While the measure also was strongly optimistic on the first quarter as well, at one point estimating 5.4 percent growth, other gauges are positive as well. CNBC's Rapid Update, for instance, puts the April-to-June period at 3.6 percent.

So, yeah—passing that tax reform that has already benefitted over three million workers was terrible. The jobs numbers are awful. Of course, this is what Democrats think. They’re so engulfed in Trump Derangement Syndrome. They’ve become immobile. They looked at the initial poll numbers for the tax reform package. Yes, they were bad, but everyone knew they would get better. When the bonuses were doled out—averaging $1,000 and in some cases, $3,000, to workers, the polls shifted. Over 250 companies have benefitted from this bill. It’s created a better job-creating and investing climate. Small business and consumer confidence levels are at record highs. The president’s approval rating has been ticking up. The generic ballot advantage Democrats had over Republicans has shrunk to single-digits. And now, from the Labor Department, “For the first time on record, the number of American job openings exceeds the number of job seekers.”

Department of Labor: "For the first time on record, the number of American job openings exceeds the number of job seekers" pic.twitter.com/sfR2B2AHaN

Love him or hate him, President Trump is getting the economy back on track and if we have to bulldoze Democrats to keep it going, then so be it. Get out of the way, liberals. The Trump train has no time for your nonsense.