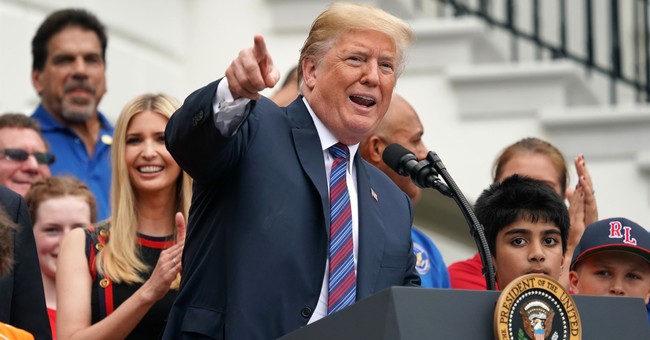 Folks, let’s be honest about a couple of things. One, how is the cancellation of a television show a presidential-level subject of conversation? Second, but now that it is; does watching Roseanne make me a bigot? The 2018 reboot of the show that garnered critical acclaim for its portrayal of a struggling working class family in the Rust Belt of America got off to solid ratings. It had been renewed for a second season—and liberal America was again perplexed. How could this happen? How could a sitcom about people we consider inferior in everyday do well? Who cares about them? And that’s the point: the Left’s hatred for anyone who isn’t like them goes beyond politics—they genuinely hate Middle America. That pent up rage is now spilling all over the airwaves after star Roseanne Barr tweeted horrible and racist remarks aimed at former Obama adviser Valerie Jarrett. The show was cancelled within hours. So, there is definitely a bit of schadenfreude going on here—a “see, you people really are terrible” lecture from the most insufferable, condescending bastions of the country. A tortuous analysis of how country bumpkins, not MS-13, are the cancer of America. That is your everyday liberal.

I’m not defending Roseanne. Comparing Jarrett to Planet of the Apes was terrible—and her show’s cancellation was not an unexpected consequence over fallouts from stuff like this. I’ve never watched Roseanne, but I do appreciate shows that show this slice of America. They’re popular. Last Man Standing and The Middle are a couple more shows showcasing life in rural America. Barr has been…off in terms of her views for a bit. This time she crossed the line. Now, to say Roseanne is the encapsulation of every Trump voter is pure unadulterated crap.

Roseanne’s network wanted to showcase the average Trump voter. And that’s exactly what they got.

Molly Knight, who has written for The New York Times magazine and ESPN, tweeted, “Roseanne’s network wanted to showcase the average Trump voter. And that’s exactly what they got.”

Culture writer Michaela Angela Davis was a guest commentator on CNN, where she flat out said all Trump voters are racist (via Free Beacon):

Tens of millions of people voted for him after he showed his cards for years," Davis added.

"Are you suggesting that they're racist?" Berman asked of those who voted for Trump.

"All of the people that voted for Donald Trump are racist?" Berman said in an effort to clarify.

"Yes. They may not all be violently racist; they may not be– [Trump's] targeted; he's very clear and strategic. Anti-blackness is a strategy that has been the foundation of the American project," she said.

Co-host Alisyn Camerota interrupted to warn about painting with too broad a brush. She suggested people can vote for a candidate without justifying everything about him, giving the example that many Democrats did as much with Bill Clinton.

"Racism isn't broad," Davis responded. "What you're not hearing is there's so many different levels of racism and how it works itself out."

Every Trump voter is Roseanne, but no immigrant is MS-13.

This is what I love about this era right now. The far Left deals in these absolutes—and there is no moral ground to be fought for here, folks. It’s what politics is, and has been for decades, a fight club. We’re all in the gutter, the swamp. It’s who can be the most brutal. So, let’s go by Davis’ rules. All Democrats are rape apologists, and they nurture and protect abusers of women. Harvey Weinstein, now ex-NY Attorney General Eric Schneiderman, Al Franken, John Conyers, and Bill Clinton. All were accused of sexual misconduct, from groping to credible allegations of rape. And yet, the liberal media more or less turned a blind eye, only deciding to crucify them when the Me Too movement intensified. So, if you voted for Bill Clinton, you voted for that culture. And remember, Clinton won twice. And knowing what we know now about Bill Clinton, would he win a presidential election? Yes, I think he would—in a landslide. So, the Left can also quit the virtue signaling on this subject regarding Trump. And just so we’re clear, I know that there are Democrats who don’t support any of the horrible things Bill Clinton, Schneiderman, and Weinstein have done to women and I also know there are Democrats who don’t think all Trump voters are racists. Rep. Debbie Dingell (D-MI) lives in Trump country, she warned her party that he could win, and they ignored her. But she’s also angered when she sees the elite media and others smear Trump voters as racist. She also offered warnings to her fellow party members not to be overconfident this election cycle. Dingell goes against the narrative, so she won’t be doing any television interviews.

CNN’s Don Lemon took it a step further. If you watched Roseanne, you’re a bigot (via Washington Times):

20 million people who followed Roseanne. Why do they follow her?

Because, in some way, they bought into her bigotry. And at least part of what she was selling is the bigotry, the racism, the homophobia, the conspiracy theories. That’s all part of Roseanne.

And if you watched that show and you believed it, then you bought into it, and you’re part of that as well.

Liberals think we need a lecture; we don’t. We don’t care about safe spaces, cry closets, neo-colonial tendencies, or the many ways in which rural voters are terrible, or how voting Republican is terrible. We don’t care. Leave us alone. At the same time, please call us deplorable. Please label us racist because it only makes us stronger. It only unifies our base, while pushing the Independent slice of the electorate away from you. You’re not as clever as you think you are, even with your B.A. in how to be a whiny little piss ant studies, and some within your ranks are seeing how these antics will lead to a second term for Trump.

I’m a Korean-America, a person of color, and I proudly support this president. Admittedly, wasn’t a fan before, but he’s surprised me. He’s moved the U.S. Embassy to Jerusalem proper, he’s serious about immigration, he’s passed a tax reform that’s reduced the financial burned for millions of working and middle class families, consumer and small business confidence is at record highs, and millions of workers have received bonuses from their employers thanks to a better job-creating and investing climate. He’s given the conservative wing of the party, some of which held doubts about him, close to everything they want—and we haven’t delved into his fight to reduce regulations. Planned Parenthood’s funding is going to be severely cut, and while we didn’t fully repeal Obamacare, the individual mandate is no more. Even Mitt Romney, believe him or not, is saying the Trump agenda pretty much mirrored what he would’ve done if he had won the 2012 election.

Yes, I came around, and the liberal media’s idiocy and the insufferable nature of progressives made that decision all the more easier. Two things: Trump 2020—but first we have to win these midterms. And even there, the Democratic enthusiasm seems to have flatlined.