Civil War: How Long Will DNC Co-Chair Ellison Stick Around? 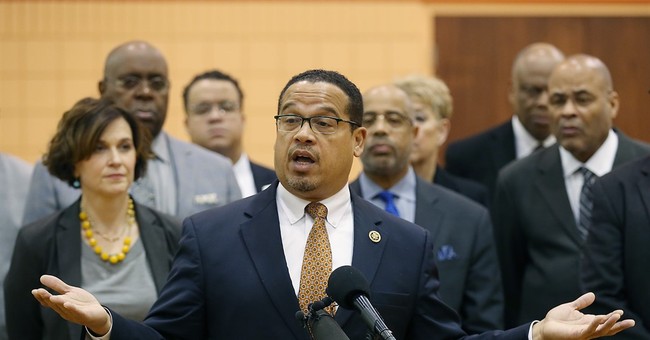 A ship cannot have two captains. That appears to be a lesson the Democratic National Committee is learning under the leadership of Tom Perez and Rep. Keith Ellison (D-MN). After the 2016 election, the DNC was a total disaster. It still is a mess. The fundraising numbers are total trash. They’re millions in debt. And the level of distrust that exists between the Bernie Sanders and Hillary Clinton wings of the party is high. Perez told Politico that he knew this job would be a long haul; he never thought it would be this bad, however. Perez is the establishment. Ellison is part of the ascendant progressive wing. And besides the Sanders campaign is unwilling to hand over their data and email lists over to the DNC—you can’t blame them—the pair don’t see eye-to-eye:

“I knew it was a turnaround job when I ran, but I undeniably underestimated the depth of the turnaround job. We had to rebuild almost every facet of the organization, and equally importantly, we had to rebuild trust,” Perez said in a recent interview at party headquarters. “Not just people who had invested in the DNC, but others — they just felt the party had let them down.”

It’s hard to overstate the scale of his task. The DNC has become every frustrated Democrat’s favorite piñata, and a symbol of everything that went wrong in 2016. Sanders-Clinton hostilities have taken on a new form: The tension now is over whether Sanders should hand over his massive voter list to the committee, as Perez has asked, and whether the committee has gone far enough to overhaul internal rules that Sanders forces are convinced rigged the nomination for Clinton. Neither side is satisfied, and words like “crazy,” “still doesn’t get it” and, in one case, “Judas” are tossed around to describe people in the opposite camp.

The relationship between Perez and Rep. Keith Ellison (D-Minn.), the former rival whom Perez named deputy chair in an attempt to ease tribal infighting, remains chilly, with periodic explosive fights over party strategy and appointments. “Functioning unity is something we’ve got to build back over time,” Ellison said, after praising Perez.

This split do could not be better illustrated than over the DNC’s endorsement of New York Gov. Andrew Cuomo. For months, the pair had given off the impression that the DNC would stay out of meddling in party primaries, though Ellison gave Cynthia Nixon, who is trying to boot Cuomo in the primary, a rosy reception at the Progressive Change Campaign Committee in D.C. last April. Now, the Left is frothing with rage, but it gets worse. The DNC is saying their endorsement was a personal one for Perez, and does not reflect the DNC proper. We were discussing rebuilding trust between the DNC and the base, right? (via HuffPo):

The members, who said Perez had neglected to inform them of the decision, argued that it would undermine efforts to earn the trust of progressives, young voters and independents already suspicious of the DNC for its role in the 2016 presidential primary.

“I was like, ‘Is he crazy?’ What does he think the response is going to be from progressives who already had doubts about the DNC?” said Yasmine Taeb, a Virginia Democratic National Committeewoman.

A senior Democratic official and DNC member, who declined to be named for professional reasons, called it an “unforced error.”

“Every misstep like this results in us having to spend a lot of time cleaning up the mess and repairing bridges and rebuilding trust,” the official said.

Perez’s endorsement of Cuomo was “personal” and not a reflection of the DNC’s preference, according to Xochitl Hinojosa, his chief spokeswoman at the DNC.

As someone who spent 1yr+ of my life traveling the country for DNC Unity Reform Commission...If we want to unite the party and win elections again, we must take the DNC’s rules seriously. The DNC is not allowed to intervene in primaries - otherwise why would we have primaries? https://t.co/jXgX3j1UBe

After the 2016 debacle, it isn’t just stupid to see a DNC Chair weighing in on a primary, it’s a wholly unnecessary, destructive move that injures something @TheDemocrats still desperately need: The trust of the party’s grassroots base.

Tom, all I can ask is “Why?” Earlier you said the party shouldn’t get involved in primaries. & Keith said the “Party shouldn’t intervene in the primary process” it should “be fair to all...& let the voters decide.” So why alienate progressives, why? https://t.co/tt2HGbJp46

I agree with my friend @keithellison: the DNC chair should not be involved in primaries like this. We have a party to build and a congress to win.https://t.co/lcp6XvfAVW

Now, there are petitions calling on Perez to resign, while other Democrats are just perplexed over this move. So, will Ellison resign? It remains unclear, but what does he gain by staying there? The DNC has gone through two overhauls, they’ve fired their top fundraiser, and they still can’t get the books balanced or a message uniformly disseminated. It’s a mess—exacerbated by the ongoing civil war within the Democratic Party. Say what you will about the GOP’s troubles, their fight is over. Trump won when he signed the tax reform package into law last December. For the Democrats, the Sanders-Clinton feud is still raw.