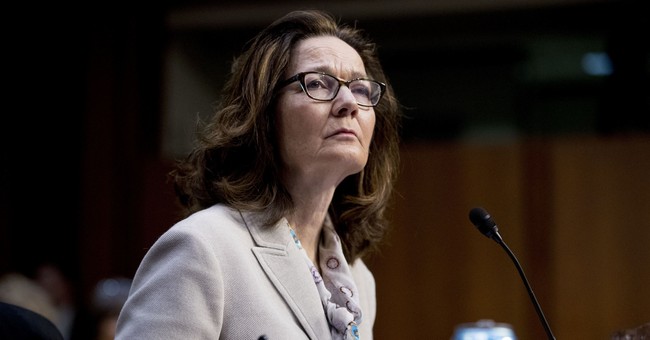 The ballgame is over on Gina Haspel’s confirmation battle. She’s President Trump’s nominee for CIA director. She will be the first female director in the agency’s history. Nevertheless, the process has been a mini-war on women, with dedicated left-wingers pushing the usual talking point: ‘yeah, she’s a woman, but she’s not a real woman.' Translation: only liberal women can be true feminists and only liberal women can benefit from feminism. Oh, and if you’re nominated by a Republican, especially Trump, you’re Satan, or something. Yet, she’s been able to clinch some Democrats, as Sens. John McCain (R-AZ) and Rand Paul (R-KY) have voiced their opposition to her nomination; McCain already put a the GOP in a shaky position, given that he’s unable to vote due to his brain cancer fight.

Yet, Haspel can now breath a sigh of relief. Sen. Mark Warner (D-VA) announced his support of Ms. Haspel, who along with Sens. Joe Manchin (D-WV), Heidi Heitkamp (D-ND),  Joe Donnelly (D-IN), put her nomination over the top (via WaPo):

Gina Haspel appears to have secured enough votes to be confirmed as the country’s next CIA director after stating in a letter to a top Democrat that the agency never should have detained terrorist suspects and employed brutal interrogation techniques against them.

Senate Intelligence Committee Vice Chairman Mark R. Warner (D-Va.) said Tuesday that he had asked Haspel to write down her views because he believed that in one-on-one meetings she had expressed greater regret, and more resolute moral opposition to the agency’s interrogation program than she had communicated during her confirmation hearing last week.

“I believe she is someone who can and will stand up to the President if ordered to do something illegal or immoral — like a return to torture,” Warner said in a statement, citing his past interaction with Haspel and the overwhelming support for her among the agency’s rank and file. He added that he also had “respect” for those “who have made a different decision” about her nomination.

Warner’s support for Haspel provides more opportunity for her to gain the backing of other lawmakers who were on the fence about her nomination.

This whole fight was odd. Haspel is a lifelong intelligence operative, whose credentials are impeccable. Yet, her qualifications are not in question. It was her time at the CIA when the enhanced interrogation program was in effect. For a little bit, the Democratic Party suffered a bit of amnesia over waterboarding, which they knew about prior to the program going into effect. One of those Democrats was Rep. Nancy Pelosi (D-CA):

She was one of the first Americans outside the Agency to learn of the enhanced interrogation program. Did she resign in protest? Leak to the media? Loudly condemn the practice upon learning of it?

She did none of these things. According to the New York Times, interrogations began in March 2002. Pelosi was one of four members of Congress briefed on the procedures that September. The congressmen, reported the Washington Post, were "given a virtual tour of the CIA's overseas detention sites and harsh techniques interrogators had devised to try to make their prisoners talk," including waterboarding. No one raised objections. "Instead," the Post continues, "at least two lawmakers in the room asked the CIA to push harder, two U.S. officials said." The next year, when she was read into the program, Democrat Jane Harman wrote a letter protesting interrogations. No such correspondence came from Pelosi.

In fact, Pelosi knew about enhanced interrogation before Gina Haspel did. At her confirmation hearing, Haspel told Susan Collins that she did not learn of the program "until about a year into its existence." That was months after Congress had been informed. "I was told that interrogation experts had designed the program, that the highest legal authority in the United States had approved it, and that the president of the United States had approved it as well as trusted leadership at the Central Intelligence Agency," Haspel said.

Haspel was an employee of the president of the United States. But Nancy Pelosi was in a position to make moral judgments. She had no obligation or responsibility to George W. Bush. She could have raised a ruckus if she wanted to—it's not like she was worried she might ruin her friendship with the president.

So why should Gina Haspel—a long-time, highly capable, well regarded civil servant who would be the first female director of central intelligence and enjoys the support of both Republican and Democratic national security officials—pay for her involvement in a program to which Nancy Pelosi voiced no objection until it became politically convenient?

I can't think of a reason. And I doubt Democrats can think of a reason, either. As Tom Cotton pointed out, if they really held to the standard that no one who had knowledge of interrogations should hold high office, why did Democrats vote to confirm John Brennan as CIA director?

And therein rests the hypocrisy. Virtually the entire Democratic caucus, and McCain, voted for John Brennan for CIA director, who was also a top CIA official when this program was in effect. Brennan later said a lot of useful information was obtained through this method.

This was all about being against Haspel because Trump nominated her. If Obama had nominated her if the opportunity came around, she would have been praised as a glass-ceiling breaker. As it turns out, being anti-Trump for the sake of being anti-Trump is not a sustainable line of attack, nor a smart strategy—especially when Obama’s intelligence fully endorsed Haspel’s confirmation.