Trump On Rosenstein/Mueller: We Want To Get This Russia Probe Over With, But These Guys Are Still Here 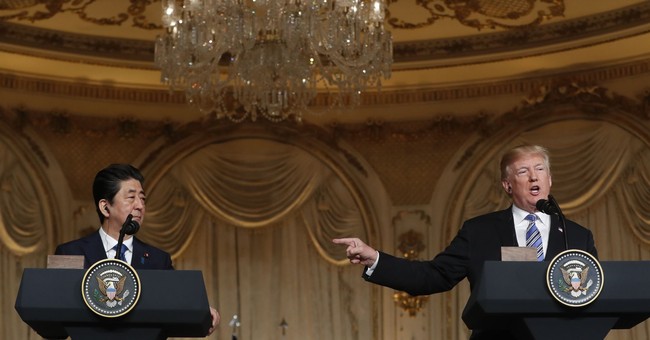 Trump said he hopes this probe is coming to an end, as he feels it’s damaging to the country. The media has been speculating for months that either these two men could be axed, and set off a possible constitutional crisis, something the Democrats are salivating over to bring forward a more robust effort to censure or impeach the president.

Trump on Mueller probe: "We are hopefully coming to the end." pic.twitter.com/qWuYFPbly1

“They’ve been saying I’m going to get rid of them for the last three months, four months, five months, and they’re still here. So, we want to get the investigation over with, done with,” said Trump.

It would appear, once again, that the firing claims were overblown, as many noted this would cause a political earthquake that’s not worth the administration’s time. Still, when Trump’s personal lawyer, Michael Cohen, had his office, residence, and hotel room raided by FBI agents based n evidence found by Mueller, which was passed onto his fellow colleagues at the DOJ, the firing rumors began to swirl again. Mueller came across the information reportedly used to justify the raids, but it did not fit within his investigation’s purview. Rosenstein is also reported to have personally signed off on the raids.

“We’ll see what happens” is what Trump said in reference to Mueller possibly being fired, setting off panic on the Hill. The president also called the raids a “disgrace.” Senate Minority Leader Chuck Schumer (D-NY) condemned Trump’s remarks and suggested that legislation might be needed to protect Mueller.

Well, Senate Majority Leader Mitch McConnell (R-KY) killed any hope of such a bill coming to the floor for a vote, adding that he’s the decider of what’s voted up or down in the upper chamber, and that its not necessary as the president won’t fire Mueller.

For now, Trump seems where he’s been for the past year on this investigation: He’s not going to fire either man. Nevertheless, Rosenstein is reported to be ready to receive his pink slipshould that be the final decision of the president.

Trump and Abe spent a couple days at Mar-a-Lago, where the two were on the same page concerning North Korea’s nuclear ambitions. A host of issues, such as denuclearization and officially ending the Korean War are on the table, though the president warned that he’s willing to walk away if he feels no deal can be reached. The talks are said to occur this June, possibly sooner. CIA Director Mike Pompeo embarked on a secret diplomatic mission around Easter, meeting with Kim Jong Un. He’s recently been nominated to replace Rex Tillerson as secretary of state, which could hit a speed bump with the mounting Democratic opposition.