Hey Media, Can We Quit Saying That Cuba’s New President Was ‘Elected’? 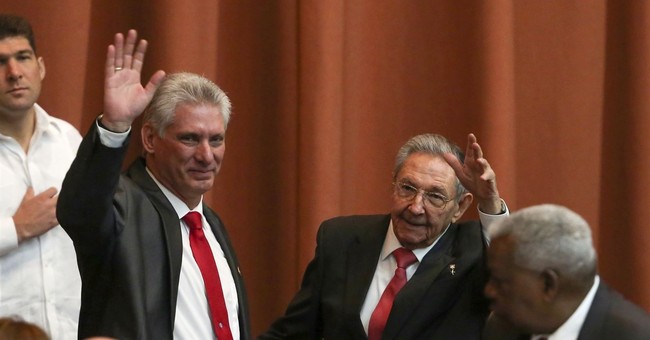 Last week, something happened in Cuba. The Castro dynasty ended (sort of), and a new president was elected (not really). Raul Castro stepped down as president, who had filled the vacancy left by brother Fidel Castro who died in 2016. The island is a communist bastion, fraught with human rights abusesand show elections. It’s an island prison, with which we’ve re-established diplomatic relations because apparently Obama thought this would help in some fashion.

Castro successor,Miguel Díaz-Canel, is not within the family. He’s a man who was born after the 1959 communist takeover of the country (via NYT):

As soon as Cuba and the Obama administration decided to restore diplomatic relations, decades of bitter stagnation began to give way. Embassies were being reopened. Americans streamed to the island. The curtain was suddenly pulled back from Cuba, a nation frozen out by the Cold War.

But one mystery remained: While nearly everyone knew of Cuba’s president, Raúl Castro, his handpicked successor, Miguel Díaz-Canel Bermúdez, was virtually unknown.

So when members of the United States Congress visited Cuba in early 2015, they peppered Mr. Díaz-Canel with questions: What did he think of the revolution that defined the island’s politics and its place on the world stage?

“I was born in 1960, after the revolution,” he told the group, according to lawmakers in the meeting. “I’m not the best person to answer your questions on the subject.”

Mr. Díaz-Canel, who became Cuba’s new president on Thursday, the day before his 58th birthday, has spent his entire life in the service of a revolution he did not fight.

Born one year after Fidel Castro’s forces took control of the island, Mr. Díaz-Canel is the first person outside the Castro dynasty to lead Cuba in decades.

He took the helm of government on Thursday morning to a standing ovation from the National Assembly, which elected him in a nearly unanimous vote. Mr. Castro embraced him, lifting the younger man’s arm in triumph.

Gee—does anyone want to guess why it was nearly unanimous? This was a show election. I bet Diaz-Canel nabbed 2,000 percent of the vote, yet the Times and other outlets decided to portray this transfer of power (sort of) as if some legitimate election has taken place:

AP's in good company. The other outlets reporting Cuban leaders were "elected" (rather than "selected")

We’re in the age of facts first, right? We’re in the age of telling people this is an apple instead of a banana. Looking at you, CNN, the news organization that couldn’t even get reporting of the president feeding koi fish accurately. They, along with their Democratic allies, say Trump is too cozy with authoritarian figures, but go crazy over the creepy North Korean cheerleaders, gush over Kim Jong Un’s sister for giving Vice President Mike Pence the death stare, and suggest that North Korea had won the diplomatic gold at the Winter Olympics in South Korea. Now, in Cuba, leaders are “elected”…unanimously. Yeah, that’s a problem. Just be honest. Findthatapple; this was an appointment. Castro is still head of the Cuban Communist Party until 2021. There are no free and fair elections in Cuba; cut the crap. Diaz is a puppet, a common aspect of authoritarian governments, which the press has no problems dressing up as quasi-legitimate governing bodies, as long as they gave a history of being adversarial to the U.S., especially to the Trump administration. If you’ve seen Sacha Baren Cohen’s The Dictator, it pretty much captures what an "election" truly is in such a country:

Cuba is still a communist hellhole, but now they’re getting some good press for their reported moves at affirmative actionin the new administration. So, everything is great (sarc.):

As the departing Cuban president, Raúl Castro, tells it, even too many of the radio and television newscasters in Cuba are white.

It “was not easy” getting the few black broadcasters now on the air hired, Mr. Castro said in his retirement speech Thursday, a remarkable admission considering the state controls all the stations.

So it was all the more extraordinary to see last week how many women and Afro-Cubans were chosen for positions in the highest echelon of Cuban politics in the new government: Half of the six vice presidents of the ruling Council of State are black, including the first vice president, and three are also women.

The new council will serve under the new president, Miguel Díaz-Canel Bermúdez, who took over on Thursday.

That the first administration in 60 years without a single Castro would include so many women and black officials was notable in Cuba, where increasing business opportunities have only swelled economic racial disparities. The move also signaled the growing significance of the Afro-Cuban movement, marked in the past 20 years by artists, hip-hop musicians and intellectuals who are more willing to speak out about the problems affecting black people on the island, experts said.

Yeah, you know would be even better: the destruction of the Communist Party in Cuba, free elections, free market enterprise, and erasure of Castroism from the Island. Now, that would be remarkable. In many ways, it would be what's that word...tremendous.