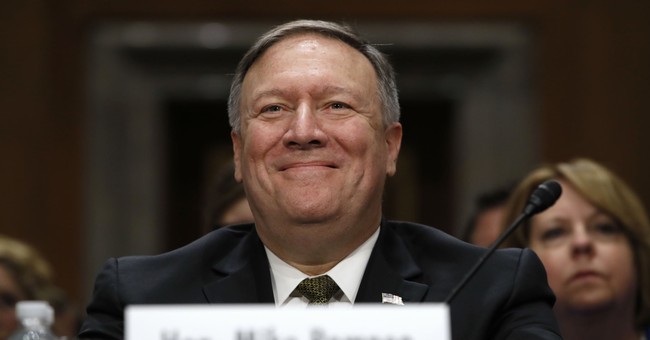 Rex Tillerson is gone and CIA Director Mike Pompeo is slated to be the nest secretary of state. He’ll have to be confirmed for that post, go through hearings, and Democrats have not been a disappointment in showing how insufferable they are. Democratic opposition to Pompeo is growing, even those who voted to confirm him for CIA Director. Sen. Tim Kaine (D-VA) is the latest to join Sen. Rand Paul (R-KY) and Sen. Jeanne Sheehan (D-NH). With John McCain (R-AZ) unavailable due to medical reasons and Paul’s defection, finding the votes could get rough for Republicans (via The Hill):

CIA Director Mike Pompeo on Thursday [4/12] faced a grilling from Democrats on the Senate Foreign Relations Committee, suggesting he faces uncertain prospects to win a panel vote to become the nation’s top diplomat.

Pompeo declined to answer repeated questions from Democrats related to the ongoing Russia investigations and was challenged at several points to break with President Trump, as lawmakers voiced concerns that he would be too deferential as secretary of State.

Pompeo’s performance seemed widely to please Republicans on the panel, but with the defection of Sen. Rand Paul (R-Ky.) and with Sen. John McCain (R-Ariz.) home receiving treatment for cancer, he will need support from Democrats to win confirmation.

Getting a majority vote from the panel — the first hurdle for the former Kansas congressman — could prove difficult.

Paul, who vowed to oppose Pompeo’s nomination over his support for the Iraq War and his past position on torture, sits on the committee. If the committee’s 10 Democrats join him in voting against Pompeo, it would be a 11-10 vote against his confirmation.

No Democrats on the panel have so far offered their support.

Nevertheless, Sen. Lindsey Graham (R-SC) said that Pompeo would be confirmed even if the panel vote fails to approve him. Even The Washington Post editorial board called on Democrats to quit playing games and confirm the man [emphasis mine]:

Mike Pompeo’s confirmation hearing to become secretary of state arrived at a moment when the Trump administration is grappling with a chaotic confluence of actual and looming foreign crises — including some of its own making. President Trump is contemplating military strikes against Syria while also pushing for a U.S. pullout; he has committed to attempting to negotiate a nuclear deal with North Korea while threatening to repudiate the nuclear pact with Iran. He is waging a trade war against China and Japan while counting on their strategic cooperation against the regime of Kim Jong Un. And he is doing all this with a badly depleted national security apparatus: Dozens of senior positions are vacant at the State Department, and the newly arrived national security adviser, John Bolton, has started with a purge of senior staff at the White House.

Mr. Pompeo, who has a reputation as a hawk and who in Congress relentlessly pursued groundless attacks against Hillary Clinton’s State Department, did his best on Thursday to be reassuring. He stressed that he favored diplomatic solutions with Iran and North Korea; he played down the likely consequences of a decision by Mr. Trump to scrap the Iran deal next month. Importantly, he promised to defend the State Department’s budget and to quickly seek to fill its many vacant positions, which would be a welcome departure from the odd management style of the departed Rex Tillerson.

Democrats who pressed Mr. Pompeo on his record, including his questionable statements about Muslims, have legitimate concerns. But rejecting or delaying his nomination, as Mr. Trump juggles multiple crises without adequate counsel, probably would make an already parlous situation worse. Mr. Pompeo should be deployed to Foggy Bottom in the hope that he will fulfill his promise to revive and reassert U.S. diplomacy.