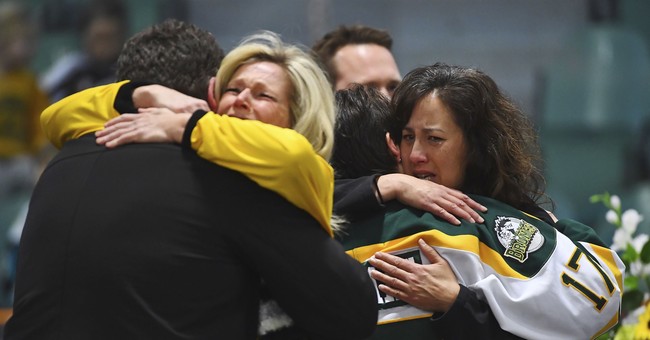 What In The Fresh Hell Is This? Actually, no—who the hell thinks like this. First, here’s some backstory to this awful tragedy. On April 6, the bus carrying the Humboldt Broncos, a Junior League Hockey team, and a truck crashed in Armley, Saskatchewan. Sixteen people were killed (via NYT):

The Royal Canadian Mounted Police is investigating the crash, which has reverberated throughout the country, especially in rural communities where hockey is the glue binding people together. The bus had been chartered by the team, the Broncos, based in Humboldt, about 100 miles away.

The crash, which also injured 13 people, occurred at about 5 p.m. The skies were clear, and the highway free of snow and ice. For the truck driver, the sun was directly ahead as he headed west on Highway 335. But at that time of day, it is still relatively high in the sky.

“People are asking: ‘Is this a really dangerous intersection?’” said Art Lalonde, a farmer who is the top elected official of this small rural municipality. “Well, it’s not. You can see for miles and it’s absolutely straight.”

At the spot where Highway 335 crosses over Highway 35, the remains of the truck and bus have been taken away. But the air was pungent with the odor of diesel fuel and churned-up earth covered with peat moss, the truck’s cargo.

A GoFundMe page that was established to take donations reached $4 million in two days (via USA Today):

A public fundraising campaign for the Canadian junior hockey team that had 15 members killed in a tragic bus accident has received over $4 million in pledges in its first two days.

A GoFundMe page set up on Friday to benefit the players and families of the Humboldt Broncos Junior A team surpassed its goal within 48 hours.

"There are no words that could express the incredible support the hockey community has seen here," said Sylvie Kellington, a Humboldt resident whose son played for the Broncos Bantam team and who set up the fundraising campaign. "Thank you to everyone for your kindness and prayers, your donations, and for sharing this GoFundMe far and wide."

A bus carrying the team from their home in Humboldt, Saskatchewan, to a playoff game collided with a semi-truck on Friday afternoon, killing 15 of the 29 people on board.

Well, the victims were mostly white and male, so this is somehow problematic. For one Quebec-based writer, who described herself as a writer, activist, and a “happy socialist,” the enormity of the donations and the speed in which they were collected was a sign of white privilege. Thanks to our friends at Twitchy for catching this bout of absolute insanity. Nora Loreto tweeted, “I'm trying to not get cynical about what is a totally devastating tragedy but the maleness, the youthfulness and the whiteness of the victims are, of course, playing a significant role.”

So, in other words, I’m not trying to be cynical and terrible, but allow me to act that way because I just need to push a total garbage talking point from the progressive cesspool. People died. Families are shattered, but let’s talk about white privilege?

I'm trying to not get cynical about what is a totally devastating tragedy but the maleness, the youthfulness and the whiteness of the victims are, of course, playing a significant role.

I don't want less for the families and survivors of this tragedy. I want justice and more for so many other grieving parents and communities.

Oh it gets better. She follows up by saying, “I don't want less for the families and survivors of this tragedy. I want justice and more for so many other grieving parents and communities.”

So, because she’s advocating for other grieving families, it’s okay to act insensitive in this case because…[insert whatever liberal talking point here that exempts bad behavior]. I’m advocating for more justice for all, so let me spit in the faces of these families because the victims were young, male, and white.

These people, progressives, don’t care about your pain or loss; they care about the narrative. They care about the action item that needs to be accomplished. They care about the agenda that needs to be disseminated. They will make you care. There’s not Switzerland in their debates, all much choose a side. And after all of this, not all of the victims are male. The 16th fatality was the trainer, 25-year-old Dayna Brons, who succumbed to her injuries yesterday. So, we can all admit and agree that this was a terrible rabbit hole to go down? First, it’s not true. Second, this tragedy has sent shockwaves through Canada. It’s just an abjectly stupid hot take to throw out there.

Even in tragedies where politics is absent, the Left makes it political. And therefore, they poison what should be a moment for unity and grief. Instead, we get ‘hey, I’m sorry your kid is dead, but there are other dead kids too.’ What an a**hole remark to make.