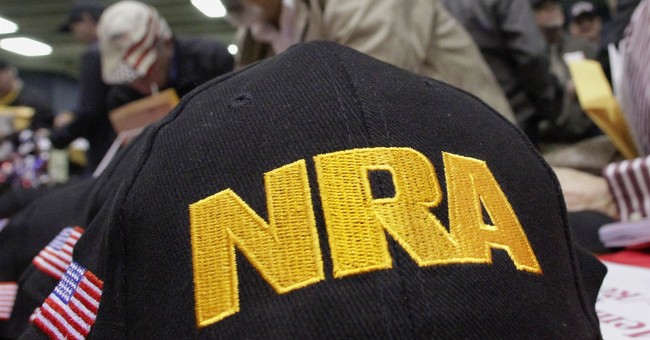 The anti-gun Left is pushing gun confiscation.  The Parkland survivors are pushing for new so-called assault weapons bans, magazine limitations, and universal background checks, the latter of which would require a gun registry which lays down a blueprint for government to seize firearms. Maybe the Parkland Three—Cameron Kasky, Emma Gonzalez, and David Hogg—don’t want to ban guns. It very well could be that they are for it, but for now—let’s assume they’re pushing for the typical gun control initiatives that we’ve fought off for years. The ones who make up the many legions of the progressive Left, however, want to ban guns, confiscate them from law-abiding Americans, and abolish the Second Amendment. So, with these anti-gun antics spewed over the news media for weeks on end, it’s not really shocking that the National Rifle Association’s political action committee had a 200 percent increase in donations—the vast majority of them from small donors (via Free Beacon):

Donations to the National Rifle Association's (NRA) political action committee more than tripled in February in comparison to its contributions from January, filings show.

The donations increased as liberal activists, politicians, and celebrities have called for more gun control measures and singled out the NRA and Republican politicians who have received support from the group following the Feb. 14 shooting at Marjory Stoneman Douglas High School in Parkland, Fla., that left 17 dead.

Speakers at the "March for Our Lives" rally this past Saturday in Washington, D.C., continued the push by calling for an AR-15 ban and restrictions on "high capacity magazines."

Supporters of the NRA appear to have responded by infusing more money into the organization's political action committee. The NRA's Political Victory Fund, the group's PAC, experienced a nearly five-fold increase in itemized donations immediately following the attack, according to the Center for Responsive Politics.

An overwhelming majority of the contributions to the NRA's PAC last month were in the form of small donations.

Those who give less than $200 are lumped together in one total sum. The NRA did not respond to inquiries on the amount of small donors to the PAC by press time.

The NRA's PAC has now taken in just over $7 million since the start of the 2018 election cycle, which began in Jan. 2017. More than $6.3 million—or around 90 percent—of its total donations this cycle came from small contributions, its filings with the Federal Election Commission show.

Again, this shouldn’t be shocking. Anti-gun antics have always driven pro-Second Amendment folks to the gun stores and to the polls, especially when there’s a Democratic president in the White House. Barack Obama was arguably one of the best gun salesmen in history, with over 100 million firearms sold during his presidency. The business boycotts and news media slamming NRA members is not new, nor do members flee from this organization when it happens. One Washington Post piece aptly noted why this organization is going to stick around for a long time. People don’t join for the discounts. They join because they believe themselves to be a “cultural vanguard”, and the businesses that have left will likely re-establish ties because 5 million members has a lot of customer potential:

Despite that unprecedented pressure from corporate America, the NRA is unlikely to lose a significant number of members or see its influence diminished, according to those who have studied the organization. Supporters and critics say the NRA is cushioned against this kind of pushback because its members sign up not for financial gain but for a chance to be part of a cultural vanguard.

“Nobody’s joining NRA to get a discount at Hertz,” said Richard Feldman, a former NRA lobbyist who is president of the Independent Firearm Owners Association. “Joining NRA is like making a religious commitment; it’s a statement about where you stand not just on guns, but on one view of what it means to be an American. It’s a powerful symbolic move.”

Many of the businesses now distancing themselves from the group likely will return eventually, because that list of 5 million members is that valuable, Feldman said.

“When I was working on the Hill for NRA, I’d ask congressmen, ‘Would you rather have the maximum contribution we can make or a mailing to your district?’ And it was never a question,” the former lobbyist said. “It was one of the greatest lists in the country, and they wanted that access.”

For the NRA, the future of firearms in the United States will be determined by how well-organized and vocal gun-rights supporters are, not by winning over new members with goodies. The organization is far more devoted to developing cultural affinities — making marketing connections with country music stars, for example — than it is to adding to its menu of discounts.

And there’s plenty more where that came from, folks. Then again, as with any election, it’s all about turnout and who is more energized. Right now, while some polls noted that GOP voters are just as enthused for the 2018 midterms, there’s no doubt that a blue wave could occur. Democratic enthusiasm is high—and the gun control agenda will inch closer to life if the Democrats win.  So, Republicans, Second Amendment supporters—we better start getting organized. The left wingers are coming.