Surprise, Surprise: March For Our Lives Once Again Shows Why The Left Can’t Be Trusted On Gun Control 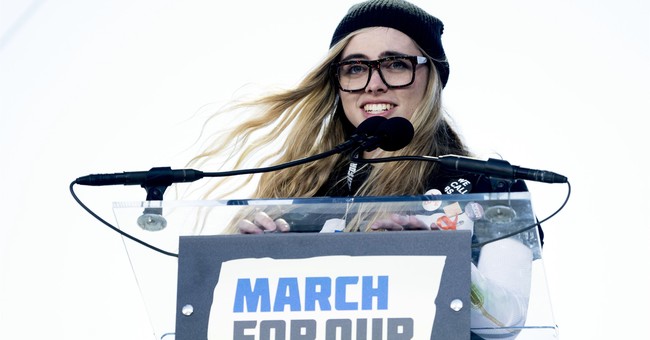 There are areas where gun control activists and the pro-Second Amendment camp can meet. There are gun violence protective orders; keeping guns out of the hands of criminals, domestic abusers, and the mentally ill. But we’ll never get there. It’s all a trap. Even bills that strengthen the National Instant Criminal Background Check System (NICS) are a dangerous game because if you give the Left an inch, they’ll take a mile. They admitted it yesterday. Delaney Tarr, a Marjory Stoneman Douglas High School student, gave an impassioned speech about how they’re going to do exactly that concerning gun control legislation, which is why Republicans, conservatives, pro-Second Amendment supporters, an any American who supports the Bill of Rights and the Constitution needs to start packing more sandbags and make sure our base turns out in 2018. The Huffington Post had a transcript of her speech from yesterday’s March To Take Away Our Rights…I mean—March For Our Lives rally [emphasis mine]

My name is Delaney Tarr, and I’m here today because I’m a Marjory Stoneman Douglas student. However, I’m not here today for the media. I’m not here for the crowds, as great as you all are, for the fame, for the fun. I’m here on this stage today and I’ve been working everyday for my 17 fellow Eagles who were pronounced dead because of gunfire.

I am here for every person that has died at the hands of gun violence and for the many more whose lives were irreparably changed because of it. I think, I hope that that is why we are all here. Because this is more than just a march. This is more than just one day, one event, then moving on. This is not a mere publicity stunt, a single day in the span of history. This is a movement.

This is a movement reliant on the persistence and passion of its people. We cannot move on. If we move on, the NRA and those against us will win. They want us to forget. They want our voices to be silenced. And they want to retreat into the shadows where they can remain unnoticed. They want to be back on top, unquestioned in their corruption, but we cannot and we will not let that happen.

There are so very many things, so many steps to take. Like right now, sign our petition. It takes two seconds and it matters. We will take the big and we will take the small, but we will keep fighting. When they give us that inch, that bump stock ban, we will take a mile.

We are not here for bread crumbs. We are here for real change.

We are here to lead.

If they continue to ignore us, to only pretend to listen, then we will take action where it counts. We will take action every day, in every way, until they simply cannot ignore us anymore. Today we march, we fight, we roar. We prepare our signs, we raise them high. We know what we want, we know how to get it, and we are not waiting any longer.

"When they give us that inch, the bump stock ban, we will take a mile" - the current speaker at the #MarchForOurLives

She then listed off demands for universal background checks, an assault weapons ban, and a ban on so-called high capacity magazines.

Today, we grab our signs, we lace our shoes, and we get ready to roar. See ya there. #MarchForOurLives

First of all, let’s drop the myth that America is a shooting gallery. It’s not, especially in our schools, which are safer than ever. School shootings are still rare. Mass shootings are rare. Second, Fix NICS was part of the omnibus bill that was signed into law by President Donald Trump on Friday, so background checks have taken a step forward in being tightened. The NRA and the National Shooting Sports Foundation supported Fix NICS.

So, what if the anti-gun mob has their way and gets magazine limits, a new ban on so-called assault weapons, and universal background checks. They want to take a mile, many more miles, if we give them an inch. It’s a gun ban. It’s gun confiscation. It’s the abolition of the Second Amendment. And this is not just something that was a byproduct of the tragic shooting in Parkland, Florida. This has been on the progressive agenda for years. They’re just using aggrieved teenagers to push it because emotions are valued more than facts in this battle—and the Left has all the feelings in the fight to strip Americans of their rights.

I asked this guy if he was actually advocating for Obama to take all of our guns. He answered: “Yea man, that’d be great.” #marchforourlives

That’s where we’re heading if these people win. We cannot let that happen, which is why I’m worried about 2018. House Democrats already have a bill that virtually bans firearms in this country, with 82 percent supporting the ban on all semiautomatic firearms, which includes handguns. This is where their base is on the issue of gun control.

The conservative movement needs to unite and defeat this upswell. This is not just a fight over the Second Amendment. It’s for the Bill of Rights. It’s for the heart and soul of the country that is being put in the crosshairs. This isn’t just some other fight; it’s a deeply entrenched and highly intense cultural one. Things could get messy. It’ll start with these action items. The universal background check system the Left wants would have to be a national registry to track private transfers, which are mostly family inheritances, like a father passing down his guns to his son or daughter, which is common. This will be the blueprint from which mass gun confiscation could occur. If it does—let’s just entertain this for a second—then, we’ll see police going door-to-door to grab these firearms from law-abiding citizens. I’m sure the Left would have zero problems with this, though they become incensed when federal agents round up illegal aliens; illegals over citizens, sounds like where the progressive Left is today, huh?

Let’s not give them an inch. It’s times like these that defending freedom is difficult. Stick to your guns (no pun intended). Use their hate to motivate you; head to that voting precinct on 2018 and don’t check that box that reads “Democratic.” When the Left calls you a terrorist for being an NRA member or says that you have blood on my hands for supporting the Bill of Rights? Renew or join the NRA and start donating to other pro-Second Amendment organizations and politicians. Also, you can be both for gun rights and keeping schools safe.

We know what the end game is with these people. After they’re done with the Second Amendment, the great progressive campaign to shred the Constitution of its institutional mechanisms that prevent mob rule through transient majorities will begin. And that’s when we cease, in my eyes, to be a country. This is merely the first round of a long battle. This is what’s at stake. The long war with the Left never ended. It was just an extended halftime. Just remember they can’t be trusted.