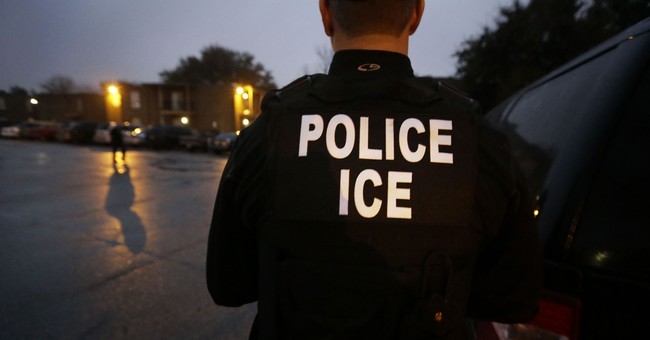 We’re a nation of laws. We have federal immigration laws for a reason. The days of Ellis Island and Vito Corleone’s story are over. This is about ensuring people who come here arrive legally. It’s to make sure terrorists don’t have an open door into America. There is nothing racist about enforcing exiting immigration laws, but this is problematic for Democrats. Part of it is the party’s aversion to white people. Another aspect is that Democrats see millions in untapped voter potential with all the illegals that are here. They want open borders. They don’t want enforcement, and they certainly don’t care about the illegals that have killed American citizens either through cold-blooded murder or driving under the influence. Yes, there are bad immigrants, and they certainly shouldn’t be here. They should be deported. The wall should be built. And Immigration and Customs Enforcement, along with the Border Patrol, should have their ranks increased to improve efficiency in enforcement. Yet, to many on the Left, ICE is the modern day Gestapo (isn’t that the IRS?), who are akin to a terrorist organization. A slate of Democrats running in 2018 are running on abolishing the federal law enforcement agency on the basis that it’s pretty much too mean (via The Nation):

Groups like Indivisible Project and the Center for Popular Democracy have also called for defunding ICE. Brand New Congress, a progressive PAC, has the proposal in its immigration platform.

“ICE is terrorizing American communities right now,” said Angel Padilla, policy director of the Indivisible Project. “They’re going into schools, entering hospitals, conducting massive raids, and separating children from parents every day. We are funding those activities, and we need to use all the leverage we have to stop it.”

Though ICE abolition is spreading on the left, it quickly meets extreme skepticism elsewhere. In part, this is because the mainstream political discourse has a huge blind spot for the agency’s increasingly brutal policies.

Others tend to dismiss ICE abolition as more of a troll than a serious policy demand. Josh Barro, a senior editor at Business Insider, argued that progressives have not paired the proposal with “a plan to do the function without the hated agency.”

But the goal of abolishing the agency is to abolish the function. ICE has become a genuine threat to democracy, and it is destroying thousands of lives. Moreover, abolishing it would only take us back to 2003, when the agency was first formed.

The central assumption of ICE in 2018 is that any undocumented immigrant is inherently a threat. In that way, ICE’s tactics are philosophically aligned with racist thinkers like Richard Spencer and the writers at the white-supremacist journal VDare.

The call to abolish ICE is, above all, a demand for the Democratic Party to begin seriously resisting an unbridled white-supremacist surveillance state that it had a hand in creating.

This is a growing position on the left, and I imagine 2020 Democratic presidential aspirants will have to grapple with it https://t.co/GOuoLnBHWG

Yeah, Democrats think this is a winning issue. How far gone do you have to be to think that a healthy majority would want to abolish immigration enforcement and allow illegals to willingly cross the border, some of who will commit crimes and go unpunished? And people wonder why Trump was elected in 2016. Yeah, the Left says they want “common sense” reform on enforcement. That’s political speak for doing nothing significant that ensures the protection of the integrity of our border or our citizens.

And it’s not just left wing publications, like The Nation, that are peddling this nonsense. The Philadelphia Inquirer is running op-eds on it as well:

The conduct of ICE and its first cousin, the Border Patrol, has been arguably the darkest moral stain on the sometimes comical but too often diabolical Trump era. And yet these one-off individual outrages — the Indonesian who led Superstorm Sandy rebuilding efforts who took refuge in a church to avoid ICE, or Philadelphia’s Carmelo Apolonio Hernandez, the mother of four that ICE wants to send back to the Mexican town where her relatives were killed by drug lords — have a hard time breaking through the bubble, amid the mass chaos of our 45th president. But now we have actual numbers to tell the sorry state of our current Deportation Nation.

In the first year of Trump’s presidency, we now know, immigration arrests and detentions spiked by a whopping one-third over 2016 — proof that the president has kept has his campaign promise for a “deportation force,” merely by “taking the shackles off” the ready and willing team he already had in place, ICE. What’s more, the biggest driver of this increase has been the seizure of undocumented immigrants with no criminal record, which has doubled under the Trump administration.

Those are the grim numbers behind a human rights catastrophe of families ripped apart and entire communities in our country now infected by fear, afraid to drive their kids to school or testify against those who actually are criminals. We’ve done a decent job in America teaching our kids about the inhumane nightmares of the recent past, to adopt a mantra, “Never again.” But the not-so-secret-police-force called ICE that operates with an almost mechanical heartlessness within our borders is what “again” looks like, here in America, in 2018.

Yet, first things first, you have to win elections to get this plan set in motion, so Republicans—this awaits, along with higher taxes, single-payer health care, speech codes, and gun confiscation. That’s your America under the Democrats—a total mess. It's also going to be an issue that 2020 Democratic field is going to have to contend with, so this should get entertaining.