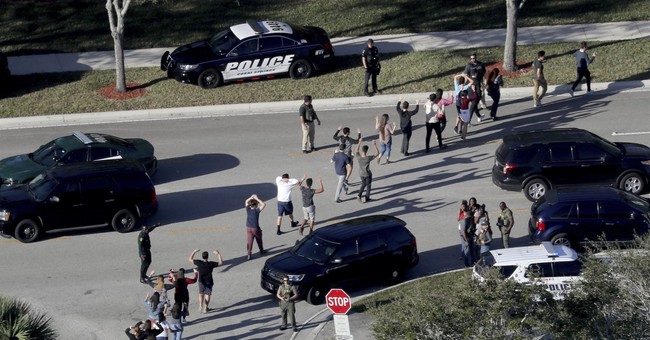 UPDATE: National Review’s Charles Cooke did not mince words about his feelings on the Broward County Sheriff’s Office. They’re “rotten to the core.”

Deputy Scot Peterson, who refused to help in Parkland, knew that the shots were coming from inside the building and said so over the radio. Then, afterwards, he brazenly lied about it, and said he thought they were outside. https://t.co/ccjEO6FVST pic.twitter.com/yMaqZRdrWQ

The whole department is rotten to the core. And it almost certainly comes from the top, from Sheriff Israel, who knew a lot more than he let on when he tried to blame everyone except himself at CNN’s town hall.

We now have a full timeline on how law enforcement reacted on the day of the tragic shooting at Marjory Stoneman Douglas High School in Parkland, Florida on February 14. On that day, shooter Nikolas Cruz shot and killed 17 people. The attack lasted six minutes, with former school resource officer Scot Peterson waiting four minutes, doing nothing, as Cruz continued his rampage. Peterson has been heavily criticized for his inaction to confront the shooter, with some calling him a coward. He resigned when it was inevitable that he was going to be suspended without pay once Broward County Sheriff Scott Israel reviewed the footage of him standing around.

Sheriff Israel, who has received criticism of his own for not acting upon the red flags on Cruz, said Peterson’s indecision “devastated” him and made him sick to his stomach that Peterson never went inside the building.

The timeline shows two things. It shows that Peterson told fellow officers to stay away from the building. And that it took eleven minutes for police to actually enter the building (via Miami Herald):

BSO policy calls for deputies to engage an active shooter and eliminate the threat.

“Do not approach the 12 or 1300 building, stay at least 500 feet away,” Peterson said over the radio, according to the records released Thursday.

The records appear to support Broward Sheriff Scott Israel’s contention that Peterson, a longtime school-resource officer, should have entered Building 12 to engage Cruz and try to prevent deaths. They also appear to show that other deputies may have refrained from rushing into the school at Peterson’s direction.

Jeff Bell, the president of BSO’s police union, welcomed the release of the audio and timeline

“It certainly backs up that he never went into the school,” Bell said of Peterson. “At one point he says to keep back 500 feet. Why would he say that?”

Last week, Peterson hired lawyers to push back against the allegation that he’s a coward, saying the criticism of his actions was unfounded. Peterson’s attorney said there has been a rush to judgment on what he did the day of the shooting.

Well, this seems pretty damning, though it doesn’t absolve the Broward County Sheriff’s Office for failing to follow up on tips about Cruz being a potential threat to public safety. The same goes to the FBI for dropping the ball on their January 5 tip, never forwarding it to their Miami office. And to state officials, who should have acted upon, among other things, Cruz’s self-mutilation in 2016, which could have triggered involuntary commitment via the Baker Act, barring him from purchasing firearms. This shooting was preventable.

Here’s the rest of the timeline [emphasis mine]:

Cruz was dropped off at the school by an Uber at 2:19 p.m. Two minutes later, he entered Building 12. He began firing within 15 seconds. Peterson, at the time, was near the administration building.

At 2:22 p.m. the fire alarm was triggered, blaring throughout the entire campus. The first 911 call also went out, via Coral Springs emergency-dispatch center.

“Be advised we have possible, could be firecrackers. I think we have shots fired, possible shots fired —1200 building,” Peterson radioed at 2:23 p.m.

At that moment, according to the video, Peterson arrived at the southeast corner of Building 12, where he appeared to remain “for the duration of the incident.” “We’re talking about the 1200 building, it’s going to be the building off Holmberg Road,” Peterson said seconds later. “Get the school locked down, gentlemen.”

As the shots intensified, other deputies began racing to the scene, radioing in. One believed he heard shots by the football field, something Peterson mentioned in a statement released last month by his attorney, arguing that the school resource deputy thought shots were coming from outside the 1200 building.

At 2:27 p.m., six minutes after Cruz went into Building 12, the shooting stopped. Cruz ditched his AR-15 in the third-floor stairwell and left.

Five seconds later, Peterson radioed for officers to “stay at least 500 feet away at this point.” A dispatcher repeated, “Stay away from 12 and 1300 building.”

Coral Springs officer Tim Burton had just arrived at Douglas High. At 2:28 p.m., he radioed out the first description of Cruz: “White male with ROTC Uniform Burgundy Shirt” — exactly what the shooter was wearing when he was arrested later. How Burton obtained the information was unclear from the timeline.

The chaos continued. Deputies tried getting into Building 13 next door, but it was locked. A fleeing student appeared to be stuck in a fence; a deputy asked for bolt cutters. One deputy called for a command post to be set up.

“We need to get units in here so we can trying to find this guy,” a deputy radioed.

It was at 2:32 — 11 minutes after the shooting began — that four Coral Springs officers and two BSO deputies made the first police entrance into the building, helping to “extract a victim.”

By 2:35 p.m., officers were seen transporting a victim on a golf cart. One minute after that, 10 officers burst into Building 12 through an east-side entrance.