NRA: We Talked Some Sense Into Trump On Gun Control 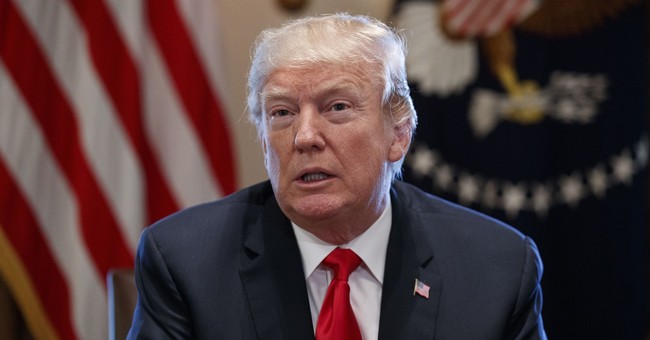 The next part of that sentence is we hope so. Wednesday’s meeting between Trump and members of Congress was nothing short of a disappointment. The president seemed keen on throwing the NRA, gun owners, and Second Amendment supporters under the bus, while giving pro-gun control Democrats everything they wanted short of a total ban on firearms. During the meeting Trump wanted to get the Manchin-Toomey bill, crafted post-Newtown to expand background checks, which failed in 2013—back onto the Senate floor. He said he would look at Sen. Dianne Feinstein’s (D-CA) assault weapons ban provision; wanted to do something on mental health, raise the age to purchase firearms to 21 from 18, and was open to confiscating guns from people without due process. Yeah, the scenario dealt with people who could be a danger to themselves or others, but we still have due process before rights are taken away.

If I were the NRA, I would be nervous—and apparently they met with President Trump last night, where it seems Trump could back off some the pro-gun control proposals he signaled supporting just a couple days prior. The good news is that there’s a lot of time to drag the president away from his gun-grabby moment since Senate Majority Leader Mitch McConnell is not rushing to get this legislation a full vote. Oh, and during that Wednesday meeting, Trump totally shot down the idea that national concealed carry reciprocity can be attached to the bill, saying it wouldn’t pass if that were the case—hence the notion why many thought this brainstorm session was a capitulation to Democratic gun control initiatives  (via NYT):

I had a great meeting tonight with @realDonaldTrump & @VP. We all want safe schools, mental health reform and to keep guns away from dangerous people. POTUS & VPOTUS support the Second Amendment, support strong due process and don’t want gun control. #NRA #MAGA

Good (Great) meeting in the Oval Office tonight with the NRA!

The top lobbyist for the National Rifle Association claimed late Thursday that President Trump had retreated from his surprising support a day earlier for gun control measures after a meeting with N.R.A. officials and Vice President Mike Pence in the Oval Office.

The lobbyist, Chris Cox, posted on Twitter just after 9 p.m. that he met with Mr. Trump and Mr. Pence, saying that “we all want safe schools, mental health reform and to keep guns away from dangerous people. POTUS & VPOTUS support the Second Amendment, support strong due process and don’t want gun control. #NRA #MAGA.”

Mr. Trump tweeted about an hour later, “Good (Great) meeting in the Oval Office tonight with the NRA!”

Mr. Trump called for comprehensive legislation that would, among other things, expand background checks to firearms purchased at gun shows and on the internet — a measure favored by Democrats but anathema to the N.R.A.

He also stunned lawmakers from both parties by suggesting that he would support measures to allow the authorities to seize guns from mentally ill people or those who could pose a danger without first following due process, like appearing before a judge.

“I like taking the guns early,” he said, adding, “Take the guns first, go through due process second.”

The reaction from the N.R.A.’s allies on Capitol Hill to those comments was fierce the next day, as conservatives vowed that such measures would not become law regardless of Mr. Trump’s declarations.

In a sign that there will be no rush to advance gun legislation, Senator Mitch McConnell of Kentucky, the Republican leader, told reporters that he had no intention of bringing a gun measure to the Senate floor next week. And Senator John Cornyn of Texas, the No. 2 Republican, dismissed Wednesday’s White House meeting as a “brainstorming session” that would not dictate policy.

Mr. Cornyn is the chief sponsor of the so-called Fix NICS Act, which would incentivize states and federal agencies to improve their reporting to the National Instant Criminal Background Check System, or NICS, for gun purchases.

The measure, which people on both sides of the gun debate agree is modest, has 49 sponsors in the Senate. Mr. Cornyn has said he would like his legislation to serve as a “base bill” that could be a starting point for a debate in which other senators could offer amendments.

But even the Fix NICS Act is facing a hurdle: Mr. McConnell cannot sidestep Senate rules to bring it to the floor quickly for a vote because unanimous consent is required to do so, and at least one senator, Mike Lee, Republican of Utah, has objected.

The NRA, through their spokesperson Dana Loesch, initially responded to the Wednesday meeting by saying the organization would support due process and push for action that better protects children.

“The NRA is also going to protect due process for innocent Americans, and that is an approach that we are going to hold to. Due process must be respected, she said to Fox News’ Martha MacCallum on Wednesday. “It is a foundational principle of this country.”

.@DLoesch: “The NRA is also going to protect due process for innocent Americans, and that is an approach that we are going to hold to. Due process must be respected…it is a foundational principle of this country.” #TheStory pic.twitter.com/DzCFowEsYN

Gun Owners of America was less kind, giving Trump the moniker “gun bragger in chief,” while adding that the whole meeting was a total outrage:

You can quote me saying that Donald Trump has turned into the “gun grabber in chief," said Gun Owners of America legislative counsel Michael Hammond.

"We are outraged by everything he said," Hammond said after a meeting at the White House where Trump encouraged a bipartisan group of lawmakers to pass gun control legislation.

Trump has done a lot of good for the country, but that doesn’t mean we can’t show we disagree on some issues, and that we should do so with vigor when that happens. The Second Amendment is one of those issues—and the president was totally in wrong during Wednesday’s meeting. Let’s hope the NRA talked him down from the ledge.

The meeting was precipitated by the tragic shooting at Marjory Stoneman Douglas High School in Parkland, Florida on February 14. Seventeen people were killed in the attack, which was preventable. The FBI, local law enforcement, and state officials dropped the ball.