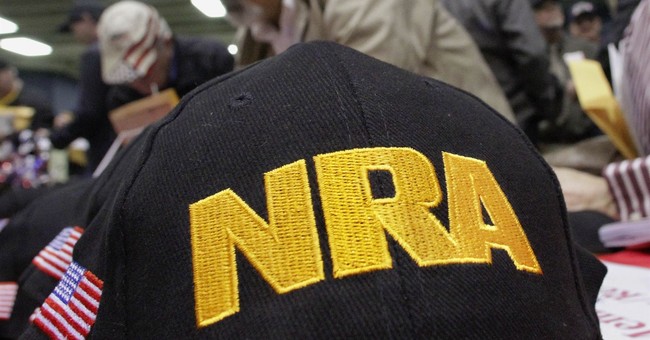 Oh, well, they wouldn’t be the liberal media without dishing out total trash about gun politics. Take this lie about their favorite punching bag, the National Rifle Association. The lefty outlet Think Progress and others tried to smear the NRA for training Florida shooter Nikolas Cruz:

The Florida shooting suspect was on an NRA-funded school rifle team https://t.co/6pZqrtZMRD

Nikolas Cruz, the 19-year-old who charged with murdering 17 people at Marjory Stoneman Douglas High, honed his marksmanship skills in a school program supported by the NRA. Cruz was, according to the Associated Press, a member of the school’s four-person varsity marksmanship team, which received a $10,000 grant from the NRA in 2016.

The marksmanship team was part of the schools’ JROTC program. On the team, Cruz trained with “air rifles special-made for target shooting, typically on indoor ranges at targets the size of a coin.”

Cruz discussed his AR-15 with other team members and was given the nickname “Wolf.” Another member of the team described him as “a very good shot.”

It’s a disgrace, especially since three JROTC students were killed while trying to save their fellow students from danger. Second, as some on social media have noted, JROTC is a federal program. Our friends at Twitchy captured some of the zingers.

I saw Think Progress push a false story smearing JROTC students. Might want to be on the look out for that one https://t.co/g8C4UuZNCE

Ok folks, time to explore yet another @sallykohn propaganda tweet:
1) Cruz was a member of the JROTC, and yes the NRA does provide funding for this air rifle competition program (4H has one too)
BUT,
2) JROTC is a Federal program sponsored by the U.S. Armed Forces.
.
1/ https://t.co/eAbgwhF4T6

3) The original program was created as part of the National Defense Act of 1916
4) It was expanded under the 1964 ROTC Vitalization Act
5) @sallykohn is either a lazy journalist, intentionally misleading her ignorant fan base, or doesn't want you to know LBJ was POTUS in 64'
2/

She may also want you to forget that her beloved Barrack Hussein Obama, Commander in Chief for eight years, could have eliminated this program.
Nope, instead, @sallykohn has become just another arm of the neo-socialist propaganda machine.
Bias much, Sally?
End/

Yes, ROTC is a program designed to train school shooters. What really sucks are all the American Heroes who take advantage of this program to go on and serve honorably some even dying on the battlefield. You should harass the 2 ROTC students who saved lives w/Kevlar blankets https://t.co/AVAHX7zg4d

The NRA money was also used to train me in rifle and pistol marksmanship. I fought in 2 wars and trained hundreds of Marines as a marksmanship instructor.#Liberty

Oh, and in case you didn’t know, Marine Corps Staff Sergeant Joey Jones lost both his legs while serving in Afghanistan. He was a bomb technician. Great patriots have come from this program.

So, no—the NRA did not “train” the Florida shooter. The JROTC program has been around for decades, it’s a federally funded program sponsored by the armed forces that the NRA happens to dole out grants for regarding marksmanship exercises. So, the military is now being put in the crosshairs of the progressive media slime machine to push for the Second Amendment’s abolishment? It’s absolutely pathetic.

These are two headlines about the same program pic.twitter.com/e4vzyJqCmP

The club was an air rifle team and was hosted by the ROTC. Amazing smear here considering JROTC students helped other students out of the school. This is really amazing. https://t.co/9XesQ7izWy