Israeli Police: PM Netanyahu Should Be Charged With Bribery and Corruption 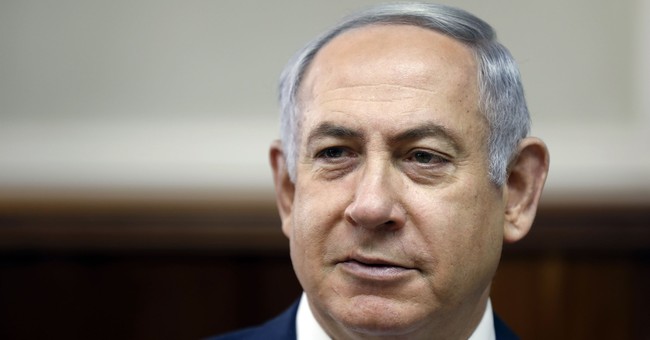 Well, it looks like Israeli Prime Minister Benjamin Netanyahu could be looking at some legal trouble, as police have recommended that he be charged with bribery and corruption. Netanyahu vehemently denies the allegations and says it will end in nothing, though NBC News is reporting that Israeli police have a solid case, with over 80 witnesses. The charge is that the prime minister received lavish gifts from Arnon Milchan, a film producer, between 2007-2016. The tradeoff was that Netanyahu would push for a law that would exempt Israelis who return from living aboard from taxation for ten years:

"This will end in nothing," a defiant Netanyahu declared after police made the announcement.

A police spokesman, however, said their case against the longtime Israeli leader is solid and based on — among other things — interviews with some 80 witnesses.

They charge that from 2007 to 2016 Netanyahu and his family received cigars, champagne and jewelry worth "hundreds of thousands of shekels" from Hollywood mogul Arnon Milchan and other supporters.

In return, Netanyahu pushed for the so-called Milchan Law, which ensures that Israelis who return to live in Israel from abroad are exempt from paying taxes for 10 years.

"Bibi," as he is known, is also accused of working out a deal for favorable coverage with Arnon "Noni" Moses, the publisher of an Israeli newspaper, Yediot Aharonot, in exchange for backing a bill that would weaken a rival newspaper.

Now that police have made the recommendation, the decision on whether to indict Netanyahu rests with Attorney General Avichai Mandelblit. Both Milchan and Moses also face possible bribery charges, the police spokesman said.

Mandelblit, 54, is Netanyahu's former cabinet secretary and has already rebuffed calls to recuse himself from this case.