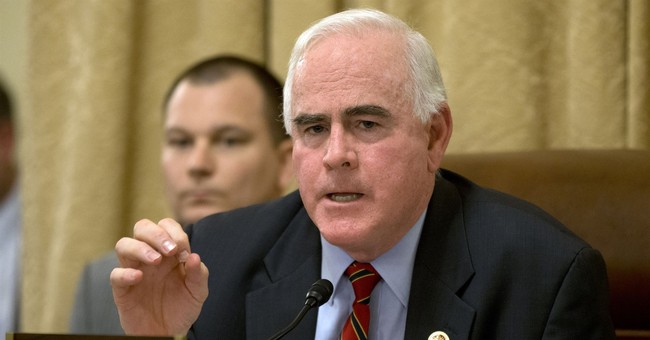 Rep. Pat Meehan (R-PA) was hit with an allegation of sexual misconduct from a younger staffer. Meehan, a married father of three, professed his love for this staffer. The work environment obviously deteriorated, as she filed a complaint and received a settlement. The irony is that Meehan is one of many leading the charge on the Hill in combating sexual harassment (via NYT):

…Mr. Meehan, 62, had long expressed interest in the personal life of the aide, who was decades younger and had regarded the congressman as a father figure, according to three people who worked with the office and four others with whom she discussed her tenure there.

But after the woman became involved in a serious relationship with someone outside the office last year, Mr. Meehan professed his romantic desires for her — first in person, and then in a handwritten letter — and he grew hostile when she did not reciprocate, the people familiar with her time in the office said.

Life in the office became untenable, so she initiated the complaint process, started working from home and ultimately left the job. She later reached a confidential agreement with Mr. Meehan’s office that included a settlement for an undisclosed amount to be paid from Mr. Meehan’s congressional office fund.

…AshLee Strong, a spokeswoman for the House speaker, Paul D. Ryan, said that Mr. Meehan was being removed immediately from the House Ethics Committee, where he has helped investigate sexual misconduct claims, and that the panel would investigate the allegations against him.

Of course, Meehan’s office denied any allegation of impropriety. Well, this fiasco proved to be too much to handle it would seem. He’s not running for re-election (via Philadelphia Inquirer):

After consultation with my wife Carolyn and with my three sons, and after prayerful reflection, I write to inform you that I will not seek re-election to the United States Congress for the 7th Congressional District in 2018,” the Delaware County Republican wrote Thursday in a letter to his campaign chairman. “Today I communicated the same to the office of Speaker Paul Ryan.”

The Inquirer and Daily News obtained a copy of the letter Thursday night.

“Unfortunately, recent events concerning my office and the settlement of certain harassment allegations have become a major distraction,” he wrote. “I need to own it because it is my own conduct that fueled the matter.”

Meehan’s seat is now a competitive one, being situated just outside of Philadelphia, encompassing Montgomery County, a key area for statewide races, along with Berks, Chester, and Lancaster counties. The PA Supreme Court tossed the state’s congressional map, so it needs to be redrawn. PA Republican leaders plan to petition for a stay in the U.S. Supreme Court, noting the deadline to redraw is “impossible” to meet. Meehan’s failed romantic outing, or whatever you want to call it, was inappropriate. It was out of line. And it may have cost the GOP another seat in the 2018 midterms