What In The Fresh Hell Is This? We Need To Shame Couples Who Have Kids Because…Global Warming? 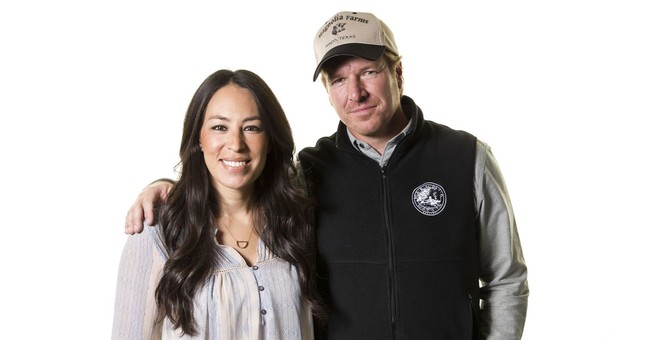 Why is it that some of the hottest hot takes come from Canada? This week, we're delving into the very 'none of our business' category of married coupled having children. On HGTV, Fixer Upper couple Chip and Joanna Gaines announced that they’re going to have a fifth child. Good for them. No, seriously—that’s great news, but some whack jobs denounced the announcement, citing overpopulation concerns. Really? That’s the troll bait that attracts these legions of losers. Folks, this is why Trump won. This busy-bodying from liberals, and make no mistake the trolls who cite population controls and global warming are most likely left wingers, have made their brand of politics insufferable. Josh Barro, a former writer for the New York Times, penned a column about what he called the hamburger problem, where progressives denigrate and lecture everyone else who’s normal about why they should, for example, eat less meat for the sake of the planet.

Back to the Gaines clan, one feminist op-ed writer in Canada said we should now shame people from having children because of global warming concerns. We’re seriously going to lecture people on how many kids they should have, if they should any at all, because of…global warming? Yeah, good luck with this campaign, which probably won’t sit well with pretty much everyone, especially mothers (via CBC):

While having a child or five is a very personal choice, it's also a choice that affects everyone who inhabits our planet. So while many people might find the backlash unwarranted, it's actually a conversation we need to have in order to challenge our uncritical acceptance of the life-fulfillment-through-procreation story.

Population control is a fraught topic, and carries with it associations with eugenics and other nasty historical events. But we still need to talk about it, and people who reacted strongly to the Gaines' pregnancy announcement know this on some level. It's not an exaggeration to say that the survival of our species depends on it.

In August of last year, New York Magazine published an article claiming we are living through a mass extinction. The article claimed that the earth will be uninhabitable within 100 years due to various consequences of climate change, food shortages and economic and political instability.

In the global West, where the environmental footprint of one person is far larger than in developing nations, it's crucial that we begin to present all people with alternatives to the traditional nuclear family. This inevitably involves calling out people who have kids like they're going out of style.

Shame is a powerful tool for changing behaviour: it's how we introduce new and existing social conventions. It's unfortunate that Chip and Joanna bore the brunt of changing attitudes, but let's learn from the reaction and examine our own actions.

It's not OK to have five kids without once considering adoption. There are so many children in North America and beyond in need of loving homes, yet adoption rates in many areas are lagging.

I get that humankind's theoretical demise is not enough to justify abstaining from what is for many the most meaningful experience of a lifetime. But it's not theoretical. Climate change is getting measurably worse, populations are multiplying exponentially and economic inequality is not getting better.

Reproduction is now an international public health concern, this author argues. So, what’s next after this lecture and the public shaming? Enforcement? Are we going to have a sex police that makes sure no one is procreating to ensure we’re not harming Brother Tree and Sister Ocean anymore? Is that what’s necessary to protect Mother Earth?

This is none of our business; what married couples do behind closed doors and how they live their lives. This isn’t a debate. It’s not an issue. Stop being insane, progressives. It’s unhinged. A woman has a right to choose, except when they apparently don’t because of global warming, or something. This might be just as insane as the other feminist writer who is forcing her son to take ballet and embrace the “girlish” after rejecting a dandelion. I’m not kidding.

Uh, you think? What the hell is going on?