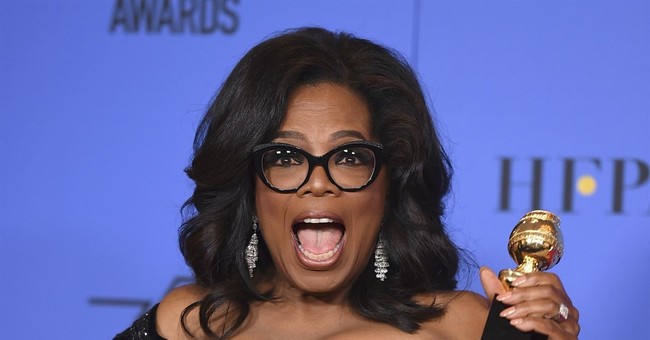 Well, it was fun while it lasted, but now it’s time to take this idea behind the shed and shoot it. In the wake of Golden Globes hysteria, there were some who were speculating that Oprah Winfrey should challenge Donald Trump in the 2020 presidential election. It’s not happening. Oprah Winfrey running for president is not happening. Peter Alexander of NBC News tweeted last night, that a “source close to Oprah” told Kate Snow, also of NBC News, that “as of today, she has no intention of running for President in 2020.”

“It’s not happening. She has no intention of running,” the source said. “That’s from Oprah herself.”

Director of Obama Iowa campaign reaches out to Oprah: "Call me" https://t.co/VQMI4p58AO pic.twitter.com/UsIdsYES4W

So, we’re back to square one. In other words, nothing’s changed since Oprah shot down these rumors back in October of 2017. Yet, there are some dead set against the television personality and multi-billionaire businesswoman running for president. In an op-ed for The New York Times, Thomas Chatterton Williams, a Winfrey run shows a) how demoralized the post-Obama Democratic Party is right now; and b) a continuation of the legitimization of Trumpism, which in his view is the propensity to highlight celebrity over experience when it comes to public office. That undercurrent, in Williams’ view, breeds political chaos. Additionally, he made that case that the presidency now becoming a prize for celebrities is a terrible precedent to set:

Indeed, the magical thinking fueling the idea of Oprah in 2020 is a worrisome sign about the state of the Democratic Party. That Ms. Winfrey could probably beat out those considered likely front-runners — Joe Biden, Bernie Sanders, Kirsten Gillibrand — is testament to how demoralized and devoid of fresh political talent the post-Obama party has become.

If liberals no longer pride themselves on being the adults in the room, the bulwark against the whims of the mob, our national descent into chaos will be complete. The Oprah bandwagon betrays the extent to which social causes and identities — and the tribal feelings they inspire — have come to eclipse anything resembling philosophical worldviews. American politics has become just another team sport, and if suiting up a heavy hitter like Ms. Winfrey is what it takes to get the championship ring, so be it.

The idea that the presidency should become just another prize for celebrities — even the ones with whose politics we imagine we agree — is dangerous in the extreme. If the first year of the Trump administration has made anything clear, it’s that experience, knowledge, education and political wisdom matter tremendously. Governing is something else entirely from campaigning. And perhaps, most important, celebrities do not make excellent heads of state. The presidency is not a reality show, or, for that matter, a talk show.

Then again, Trump has accomplished some great things in his first year in office, things that maybe his staunchest opponents thought was never possible, like the most extensive tax reform in 30 years, putting Neil Gorsuch on the Supreme Court, defeating ISIS, and boosting our economic growth. I’m not saying that Oprah should run, but Trump won the 2016 election and parts of the piece seemed to still lament the 2016 results. Williams hopes Oprah isn’t going to run. It sounds like she won’t.