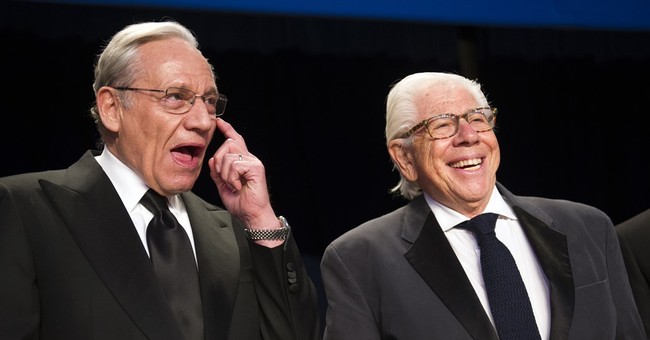 Associate editor for The Washington Post Bob Woodward threw some cold water on his former reporting partner Carl Bernstein, who criticized President Trump as a man who was trying to undercut the national news media as an institution. He also heaped praise for his former employer, The Washington Post, CNN, and The New York Times, citing them as outlets that have covered the presidency with excellence in the past five to six decades. CNN host Dana Bash liked Bernstein’s remarks.

“Amen, Carl,” she said, but Woodward also noted the tone of the reporting of the Trump White House has being fraught with a smug self-righteousness. Bernstein agreed. The duo gained prominence for their reporting of the Nixon White House and its involvement in the Watergate break-in. It was a huge story, one in which was presented with the facts only, not the smugness that Woodward says is so pervasive in the national media. He’s not wrong (via Free Beacon):

"But just real quickly, the tone is a big issue here," Woodward said.

"In lots of reporting, particularly on television, commentary, there's kind of self-righteousness and smugness, and people kind of ridiculing the president," Woodward said. "When we reported on Nixon, it was obviously a very different era, but we did not adopt a tone of ridicule. The tone was, ‘what are the facts?'"

.@PressSec on Wolff book: “This book is filled with false and misleading accounts from individuals who have no access or influence with the White House. Participating in a book that can only be described as trashy tabloid fiction exposes their sad desperate attempts at relevancy"

Over at New York Magazine, they’ve published excerpts of Michael Wolff’s new book, which describes how the Trump orbit was reportedly not even planning on cobbling together a governing administration because everyone thought he was going to lose to Hillary Clinton. From Kellyanne Conway to Roger Ailes, they were all prepared to move on, maybe setup a Trump news network. Either way, how this operation blew up the system was a win in itself. It’s message and branding would live on long after the 2016 election had passed. And then, Trump won. It’s a rather damning expose, which has been denounced by the Trump White House. Whatever the case, there’s one section that is just ridiculous; Trump didn’t know who former House Speaker John Boehner. Of course, he did, folks:

It’s this constant stepping on the rakes from the news media that should lead to more scrutiny than usual when it comes to stories about the Trump White House. So far, it’s been embarrassing. From stories about the bust of MLK, Jr. being removed from the White House to memos about National Guardsmen rounding up illegal aliens, a lot of stories that are just shoddy. Those two examples above could qualify as fake news. No such operation is being mulled by DHS and the bust hasn’t been removed. The recent trip ups come from CNN, where the network reported that a man named Michael Erickson supposedly emailed Donald Trump, his son, and other top campaign officials the decryption key to a trove of DNC documents from Wikileaks before it was made public. The problem was that a) the date of the email exchange was wrong; and b) the documents were made public the day before the email was sent. In December, ABC News also got a face full of buckshot when reporter Brian Ross went off half-cocked, saying that during the 2016 election—Michael Flynn was asked to make contact with the Russians. It was actually after the election was over, and that it was your run-of-the-mill diplomatic engagement that’s executed for any incoming administration. Ross was suspended for four weeks without pay. That story also tanked the markets by 350 points. The smugness problem is certainly one that could be remedied much easier than the mainstream media’s serial failure in getting things right in the Trump era, like when emails were actually sent or received. Mistakes will happen. We're all human, but let's say the big whigs of the news media have a rather sluggish response to when their rank-and-file step in it.