You're Wrong: CNN Steps On A Rake With Donald Trump. Jr. Wikileaks Story 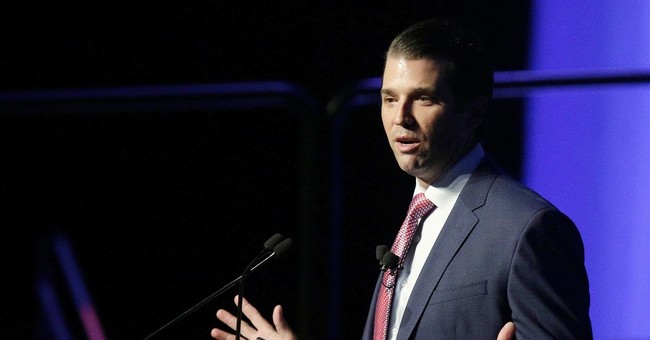 Editor's Note: Post has been updated to include that CNN also included Donald Trump and other officials in the Wikileaks non-story. Also, Michael Erickson emailed the Trump team, not Wikileaks. That's on me, folks.

Bombshell! A man emailed Donald Trump, Donald Trump Jr., and other figures within the Trump inner circle with possible foreknowledge to thousands of emails during the 2016 election—and had given him the decryption key for the hacked documents from the DNC and John Podesta. CNN dropped this report earlier today [emhasis mine]:

Candidate Donald Trump, his son Donald Trump Jr. and others in the Trump Organization received an email in September 2016 offering a decryption key and website address for hacked WikiLeaks documents, according to an email provided to congressional investigators.

The September 4 email was sent during the final stretch of the 2016 presidential race -- on the same day that Trump Jr. first tweeted about WikiLeaks and Clinton.

Whoa. If the Trump camp had access to stolen emails in advance and guided Wikileaks' activity last fall, that would amount to a criminal conspiracyhttps://t.co/OI3jZ9D9E8

Are we getting closer to evidence of Russian collusion? Is this a hot story? No, not even close. In fact, it’s completely wrong. All of this information was public and it was The Washington Post who reported on this trip up. CNN stepped on a rake on this one, or if you will, pulled a Brian Ross [emphasis mine]:

A 2016 email sent to President Trump and top aides pointed the campaign to hacked documents from the Democratic National Committee that had already been made public by the group WikiLeaks a day earlier.

The full email — which was first described to CNN as being sent on Sept. 4, 10 days earlier — indicates that the writer may have simply been flagging information that was already widely available.

And this was hardly a time bomb in the first place. Media outlets keep shooting themselves in the foot. https://t.co/mczmLu4j83

Instead of retracting its report, CNN is demanding to know why Trump didn't *tell the FBI* about a rando who e-mailed public info. https://t.co/VK8U5x5YAc

So CNN misreported the date of the Wikileaks email that @DonaldJTrumpJr received, meaning that the entire point of the story --
that the campaign might have gotten advance warning of the leaks -- is wrong. Wow. https://t.co/oiXngwHZAq

ABC News’ Brian Ross also had an issue with dates that cost him four weeks without pay. He was suspended after he erroneously reported that Michael Flynn had been directed to contact the Russians by Donald Trump during the 2016 campaign. This was actually discussed after the election when President-elect Trump was laying the diplomatic groundwork for his incoming administration. Ross was suspended and will no longer be reporting on the president. It seems at CNN, they didn’t learn anything from ABC News’s trip up.

A CNN spokeswoman says there will not be disciplinary action in this case because, unlike with Brian Ross/ABC, @MKRaju followed the editorial standards process. Multiple sources provided him with incorrect info.

Name the sources. Being lied to negates any obligation to respect on-background guidelines. https://t.co/gU1xtbRQNX