Oh My: John Conyers' Son, Possible Successor To Father's Seat, Was Arrested For Stabbing His Girlfriend 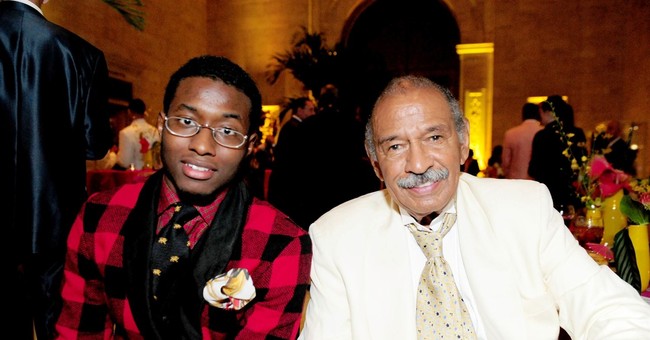 So, this is quite the family. Yes, we’re all human and all that, but this is just—you can’t make this up about the Conyers clan. Rep. John Conyers (D-MI) has decided to take his leave. His last day as a member of the House of Representatives was December 5. He wants his son, John Conyers III, to be his successor. Former Rep. Conyers faced increasing pressure from within his own ranks to resign over sexual harassment allegations. In 2015, he settled a claim, using $27,000 in taxpayer money in the process. House Minority Leader Nancy Pelosi called on Conyers to resign, as did other top Democrats.

With Conyers gone, his son looks like a likely choice to replace him, though we now know that he was arrested for stabbing his girlfriend. He was arrested on domestic violence charges, but was never prosecuted (via NBC News):

John Conyers III, a Detroit hedge fund manager named as a possible successor to his scandal-rocked father, Rep. John Conyers, was arrested in Los Angeles this year on suspicion of domestic violence, but prosecutors declined to charge him, according to documents obtained by NBC News.

The Los Angeles County District Attorney’s Office cited a "lack of independent witnesses" and their conclusion that it "could not be proven beyond a reasonable doubt that the victim’s injury was not accidentally sustained" while he was disarming her, according to case paperwork.

In addition, prosecutors said the victim had no visible injuries beyond a small stab wound to her lower bicep and no other independent witnesses to what she described as earlier pushing and shoving by Conyers III.

Conyers III, 27, was arrested on Feb. 15 at a Los Angeles residence on suspicion of violence against his girlfriend after the alleged victim called police. The victim was not named in the document that recorded the decision not to file charges.

The girlfriend said that Conyers III suspected her of cheating after he went through her computer. She told police that he "body slammed her on the bed and then on the floor where he pinned her down and spit on her," the report says.

She said when she tried to call police, he took her phone and then chased her into the kitchen, where she grabbed a knife and told him to leave. By her account, he took the knife and swung it at her, cutting her arm.

Conyers III was taken into custody and released in lieu of $50,000 bond the same day, police said.

So, we have the father leaving because he reportedly sexually harassed women and now his son was arrested for stabbing one. As for Mrs. Conyers, well, she has legal issues of her own. She was sentenced to more than three years in prison back in 2010 for bribery (via MLive c. 2010):

A former Detroit city councilwoman was sentenced to more than three years in prison Wednesday for bribery after a federal judge refused to set aside her guilty plea during a stormy court hearing dominated by a dispute over evidence of other payoffs.

As guards cleared the packed courtroom, Monica Conyers yelled that she planned to appeal. The wife of U.S. Rep. John Conyers, D-Mich., wanted to withdraw her guilty plea, suggesting she was the victim of "badgering" last year when she admitted taking cash to support a Houston company's sludge contract with the city.

But U.S. District Judge Avern Cohn, reviewing a transcript of the June hearing, said Conyers had denied any coercion and voluntarily pleaded guilty to conspiracy.

Conyers is the biggest catch so far in the FBI's wide-ranging investigation of corruption in Detroit city government. Nine people have pleaded guilty, including two former directors of the downtown convention center, and prosecutors have promised that more charges are coming.

"Bribery is a betrayal of trust," Cohn told Conyers after announcing a 37-month prison term for her "egregious" crime. She quit the council after pleading guilty in June.

It would be wise for the voters of this congressional district to find someone new to represent them.

Rebecca Downs
The Chinese Communist Party Goes After a Sitting Member of Congress, and He Responds in the Best Way
Rebecca Downs
Biden Reminds Gun Owners the Government Has Nuclear Weapons
Katie Pavlich
Al Sharpton Made a Solid Observation About Race Relations and Latte-Drinking Libs Who Are Obsessed About It
Matt Vespa
John McAfee Found Dead in Prison Cell Hours After Court Ruled in Favor of Extraditing to US
Rebecca Downs
CARTOONS | Tom Stiglich
View Cartoon
Most Popular