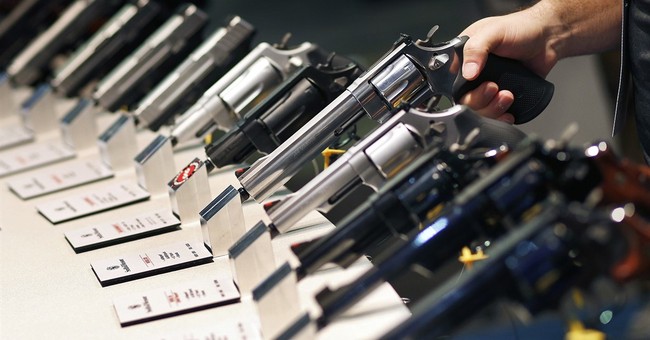 Yet the @HouseGOP just voted to do exactly that #StopCCR

Anyone convicted of a felony or domestic-violence-related misdemeanor is already prohibited from legally owning or possessing firearms, let alone legally carrying them. https://t.co/vmoDN16E12

I wish every state were constitutional carry, in which you don’t need a permit to carry a firearm, but we all can’t get what we want. There’s the political reality. To fix this, national concealed carry reciprocity has been one of the major goals for those who support civil rights and the Second Amendment. To put it simply, all law-abiding gun owners with gun permits can carry them in any state that recognizes carry rights. As of 2014, all 50 states recognize concealed carry rights, though some states have different statutes regulating such a right. This bill comes in the aftermath of the horrific shooting in Sutherland Springs, Texas that left 25 people dead, with another 20 injured.

This tragic incident occurred because the perpetrator, an Air Force veteran, didn’t have his criminal history forwarded to the FBI by the Air Force. They admitted to tripping up. The shooter, Devin Kelley, was a disturbed man who was court-martialed for domestic abuse in 2012, sentenced to a year in jail upon conviction, and was given a bad conduct discharge in 2014. A bad conduct discharge is not the same as a dishonorable one, which would have barred Kelley from purchasing firearms. Still, the domestic abuse conviction and jail sentence still made him a prohibited person; this shooting could have been prevented.

Now, Congress decided to fix the National Instant Criminal Background Check System with this bill, while including a national concealed carry reciprocity provision. It passed earlier today (via AP):

The measure would allow gun owners with a state-issued concealed-carry permit to carry a handgun in any state that allows concealed weapons. It now goes to the Senate.

Republicans said the reciprocity measure, a top priority of the National Rifle Association, would allow gun owners to travel freely between states without worrying about conflicting state laws or civil suits.

Rep. Elizabeth Esty, D-Conn., called the bill an attempt to undermine states’ rights, “hamstring law enforcement and allow dangerous criminals to walk around with hidden guns anywhere and at any time. It’s unspeakable that this is Congress’ response to the worst gun tragedies in American history.”

Well, criminals already do that, congresswoman, but that’s beside the point. There was some pushback from pro-gun groups that this bill would expand background checks, but Stephen Gutowski at the Free Beacon said no such provision alluding to that exists in the current bill [emphasis mine]:

The Fix NICS provisions now contained in the combined bill establish incentives for states and federal agencies to better comply with current law on reporting disqualifying criminal and mental health records to the National Instant Criminal Background Check System (NICS). They also include punishments, such as stripping bonuses from political appointees, for states and agencies that don't fully comply.

Some pro-gun groups have opposed the bill claiming it expands the background check system. The text of the bill shows, however, that it does not expand the classifications of who is considered prohibited from owning or possessing firearms, nor does it expand the kinds of criminal or mental health records required to be submitted to the system. The bill also doesn't expand which agencies are required to report records to NICS.

Despite what appears in the bill's text, Dudley Brown, president of the National Association for Gun Rights, described it as establishing "a gun control super-database" and "expanding the Brady-NICS gun owner registry."

"Weak Republicans always push gun control laws under the guise of ‘enforcing the laws we have,' but only end up pushing the Democrat agenda, giving gun owners more reasons to worry," he said.

Meanwhile an alert from Erich Pratt, executive director of Gun Owners of America (GOA), claimed Fix NICS "would require that the rolls of Social Security, Medicare, Medicaid, CHIP, and ObamaCare be trolled for recipients with PTSD, ADHD, or Alzheimer's—that is, people who have had guardians appointed," the group's legislative council said it was not arguing the bill would create new categories of prohibited people. Instead, he said, the bill's attempt to gather all of the records required under current law, which dates back nearly a decade, is the problem.

"No, we are not arguing that ‘Fix NICS’ adds new categories," Michael Hammond, general counsel for GOA, told the Free Beacon. "But we are arguing that 18 U.S.C. 922(g), as interpreted by the 2007 NICS Improvement Amendments Act and its regulations at 27 CFR 478.11, is so potentially broad, that, if every eligible name were submitted to NICS, as the bill proposes, the result would be the submission of a large number of names of otherwise law-abiding Americans."

Despite any concerns it has with the Fix NICS Act, GOA encouraged members of Congress to vote for the combined bill in hopes that the package had a better chance of passing the Senate.

It now heads to the Senate, where it’ll be more of an uphill battle given the 60-vote threshold. For starters, there’s disagreement with having the Fix NICS and concealed carry provision in the same bill. Senate Majority Whip John Cornyn (R-TX) supports the concealed carry measure, but told AP, “I think it’s a mistake to try to combine this with the ‘Fix NICS’ background check.”