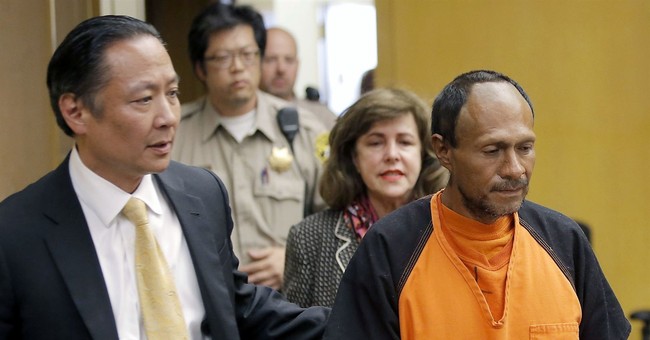 UPDATE: He's going to be deported.

Illegal alien Jose Zarate shot Kate Steinle on a San Francisco pier back in 2015. Zarate had been deported multiple times, but San Francisco is a sanctuary city. Steinle's death sparked a nationwide debate over the issue of immigration, specifically these city ordinances that shield illegal aliens from deportation. The assumed logic is that the law would allow law enforcement to better fight crime since illegal aliens could come forward and reports felonious activity without the fear of being deported. The evidence to support this claim is shoddy. The Justice Department tried to cut off grant funding to cities that do not cooperate with federal immigration authorities, which received some pushback from the courts. Prior to Thanksgiving, a federal judge blocked President Trump’s executive order that would have cut off aid to sanctuary cities.  At the time of his arrest, Zarate was known as Francisco Sanchez. California also became a so-called sanctuary state in the interim. Zarate was deported five times prior to the Steinle shooting and said he picked San Francisco because he knew authorities wouldn't be looking to deport him (via ABC News):

A jury has found Jose Ines Garcia Zarate not guilty in the murder of Kate Steinle, the woman whose shooting death on a San Francisco pier in 2015 provoked an immigration debate.

Zarate, of Mexico, had been deported several times and has previous convictions for re-entry after deportation. Before the killing, he had been released from a San Francisco jail after a minor drug charge was dismissed. While U.S. Immigration and Customs Enforcement had issued a detainer for Zarate, he was released under the city's sanctuary laws.

Zarate had claimed he found the gun used in the shooting wrapped in a T-shirt under a bench and that it went off accidentally, The Associated Press reported.

Steinle was 32-years old. She was walking on the pier with her father, Jim, when she died. Her final words were “help me, Dad.”