Why Trump Won: Liberal Magazine Triggered That Washington Redskins Are Playing On Thanksgiving 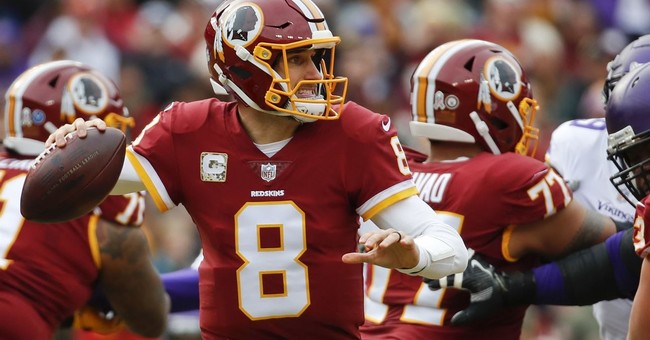 If there is one thing that is totally offensive this Thanksgiving holiday, it’s that the Washington Redskins are playing today. I’m not kidding. The liberal magazine The Nation was quite triggered about this and even reached out to Native American tribes to get a comment. Apparently, this move shows the NFL owners's “true colors, “or something. I’m hoping this a joke, or even satire, because no one cares about the Redskins name. No one. And it’s not going to change—ever. Yeah, I know all the posts about Thanksgiving being some genocidal holiday, or how history has given us the wrong side of this day, I don't dwell on that, most Americans don't. Today is about football, turkey, and family. Now, those who are having fits about this, I do give my thanks to you—you gave us President Trump. Yet, I digress. Here’s what The Nation had to say about tonight’s game:

The NFL—for all their corporate rhetoric about being something that “brings the country together”—of course has a team named after a Native American racial slur in the nation’s capital. That’s not news. What is news is that on Thanksgiving, for the first time in league history, this team in Washington will be playing host. That means as we finish our food, slip into sweatpants, and to gather around the television to watch NFL football, a tradition only slightly less ubiquitous than pumpkin pie, the R*dskins slur— a name that exists only because of genocide and displacement—will have center stage.

Okay—there’s really no need to analyze or give commentary about this. It’s just a football game. For all the how-to posts about navigating politics at the Thanksgiving dinner table, or how to deal with Trump-voting family members, the fact is liberals are the problem. They're the ones who seek to make dinner uncomfortable. Planned Parenthood thinks abortion is acceptable Thanksgiving discussion; Chuck Schumer wants you to explain the tax reform package. No. Just stop.

If anyone did that at our table, we would probably disown that person. Alas, our family, which has many liberals, doesn’t have the condescending, progressive types that are the most insufferable people on the planet. Besides Hillary Rodham Clinton not being president, that’s another thing I’m thankful for—that and having a loving and healthy family. But I digress.

Tonight, the Washington Redskins will be playing the struggling New York Giants—and progressives are just going to have to deal with it. The NFL exists. The Redskins exist. Teams play each other on Thanksgiving. It's tradition. The Left with their political correctness is reading way too much into this. All I can say is go Giants! And hell yeah—I’ll be watching the game.

*Yes, I know the Giants are having their worst season since 1980, but I never abandon my team—ever. I’m not an Eagles fan, though they're riding high this year (very high)--believe me.