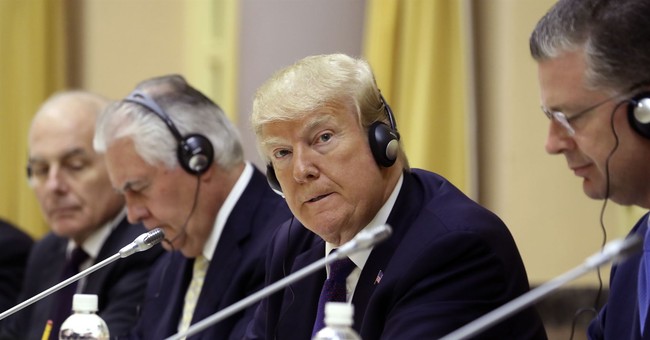 North Korea and its nuclear weapons program have plagued the U.S. for years. What to do with all of these missile tests? How do we negotiate? It’s all documented. With President Donald Trump, some people do think that his Twitter and overall personality could make a nuclear exchange more likely. So, as the president finishes the last leg of his Asia trip, he decided to take to Twitter and bash North Korean Kim Jong-un “short and fat.” This came after the Asian dictator called Trump “old.”

“Why would Kim Jong-un insult me by calling me ‘old,’" tweeted the president. “When I would NEVER call him "short and fat?" Oh well, I try so hard to be his friend - and maybe someday that will happen!”

Why would Kim Jong-un insult me by calling me "old," when I would NEVER call him "short and fat?" Oh well, I try so hard to be his friend - and maybe someday that will happen!

Calling Trump “old” isn’t exactly what the North Koreans said about Trump; they called him an “old lunatic” after his address to the South Korean National Assembly this week (via The Guardian):

Trump has been working to rally global pressure against North Korea’s nuclear weapons program on the trip to Asia. In a stern speech delivered in South Korea’s National Assembly on Tuesday, he said: “Do not underestimate us. And do not try us ... The weapons you’re acquiring are not making you safer, they are putting your regime in grave danger. Every step you take down this dark path increases the peril you face.”

On Saturday, the North’s Foreign Ministry responded in a statement: “Reckless remarks by an old lunatic like Trump will never scare us or stop our advance. On the contrary, all this makes us more sure that our choice to promote economic construction at the same time as building up our nuclear force is all the more righteous, and it pushes us to speed up the effort to complete our nuclear force.”

At a news conference in Vietnam on Sunday after his tweets, Trump said it was possible he could be friends with Kim one day and that it would be “very, very nice” but he was not sure that it would happen.

Asked if he could see himself being friends with Kim, Trump said: “That might be a strange thing to happen but it’s a possibility. If it did happen it could be a good thing, I can tell you, for North Korea, but it could also be good for a lot of other places and be good for the rest the world. It could be something that could happen. I don’t know if it will but it would be very, very nice.”

Trump has traded insults and threats with Kim in the past amid escalating tensions over Pyongyang’s nuclear and missile programs. North Korea conducted its sixth and most powerful nuclear bomb test on September 3, prompting another round of UN sanctions.

We’ll see what happens now. Glean what you will from this, but no—I don’t think nuclear war is coming because of a tweet.