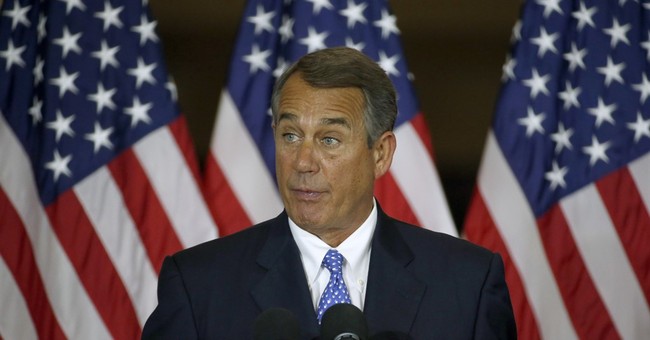 Remember John Boehner? The former Speaker of the House is apparently enjoying retirement in Ohio. Politico tailed the former speaker, who retired at the end of October of 2015, and found that he had some rather harsh things to say about his former colleagues, though he contends that none of them are personal. He is not a fan of former Rep. Jason Chaffetz (R-UT), not because he thinks he’s a bad man, but because he did things that only benefitted him. Tragic since Boehner admitted that Chaffetz had legislative talent. As for Rep. Jim Jordan from his native Ohio, a stalwart of the conservative wing of the GOP, Boehner described him as a “legislative terrorist.” Still, he doesn’t seem to have a true beef with these men. He also recounted a run-in with then-Senate Majority Leader Harry Reid, who criticized how he ran the House. Boehner plainly told him to go ‘f**k’ himself. You can read the rest of the profile here, but here are the portions where he goes after Chaffetz, Jordan, and Reid. Politico’s Tim Alberta was with Mr. Boehner in June of this year [warning: strong language]:

Boehner’s beef with Chaffetz, who would later join Fox News as a paid contributor, is not personal—just that he’s a “total phony” who possessed legislative talent but focused mostly on self-promotion. “With Chaffetz,” Boehner says, “it’s always about Chaffetz.”

His problems with Jordan, the founding chairman of the ultraconservative House Freedom Caucus, run much deeper. To Boehner and his allies, Jordan was the antagonist in the story of his speakership—an embodiment of the brinkmanship and betrayal that roiled the House Republican majority and made Boehner’s life miserable. Although he would tell me in later conversations that he holds no grudges against anyone, today Boehner unloads on his fellow Ohioan. “Jordan was a terrorist as a legislator going back to his days in the Ohio House and Senate,” Boehner says. “A terrorist. A legislative terrorist.”

Breaking the ice, I [Tim Alberta] mention some news of the day—that Trey Gowdy appears likely to become chairman of the House Oversight and Government Reform Committee. The previous chairman, Jason Chaffetz, had abruptly announced his resignation from Congress; House conservatives had hoped that Jim Jordan, a senior member on the committee, might pursue the chairmanship. Boehner grins. “Gowdy—that’s my guy, even though he doesn’t know how to dress,” he says. Then Boehner leans back in his chair. “F**k Jordan. F**k Chaffetz. They’re both a**holes.”

[Talking about the fiscal cliff]

Obama had campaigned in 2012 on the proposal that tax rates should jump for individuals making more than $200,000 annually. After weeks of haggling following his victory, the president offered a concession: $400,000 for individuals. Boehner made a counteroffer of $1 million. Had the entire House GOP rallied behind that idea, they might have forced Obama’s number higher. But a larger number of Republicans, having pledged to an outside group never to raise taxes, period, refused to go along. A dejected Boehner conceded defeat in a private conference meeting, and, in a remarkable moment of vulnerability, recited the Serenity Prayer used in 12-step addiction programs.

Boehner was running out of patience. The day before, Reid had blasted him from the Senate floor, saying he ran the House like a dictator. “I don’t do angry. Nobody on my staff has ever seen me angry,” Boehner tells me. “But that little son of a bitch got under my skin.” When he arrived at the White House for a meeting with the president and congressional leaders, Boehner spotted Reid talking with Senate Minority Leader Mitch McConnell. “I walked right up to him and said, ‘Harry, you can go f**k yourself. You ever listen to that s**t that comes out of your mouth?’” Boehner imitates a flustered Reid, then adds: “I thought McConnell was going to have a heart attack.”

A rather interesting moment in this piece came when Rep. Don Young (R-AK) reportedly drew a knife on Boehner for refusing to accept the Bridge to Nowhere project. Boehner’s reaction: he told Don Young f**k you. Is there bad blood between these guys? No—They’re friends and Boehner was Young’s best man at his wedding.

The funding of pet projects in lawmakers’ districts helped leadership to keep members in line, but fueled a culture of venality and waste; boondoggles like the “Bridge to Nowhere,” a 2005 project calling for a $223 million earmark to construct a bridge to a remote, sparsely populated Alaska island, became symbols of congressional excess. Boehner never accepted an earmark in Congress—and he enjoyed railing against those who did. His heckling once provoked Don Young, an Alaskan himself, to pin Boehner against a wall inside the House chamber and hold a 10-inch knife to his throat. Boehner says he stared Young in the eyes and said, “F**k you.” (Young says this account is “mostly true,” but notes that the two became good friends, with Boehner later serving as his best man.)